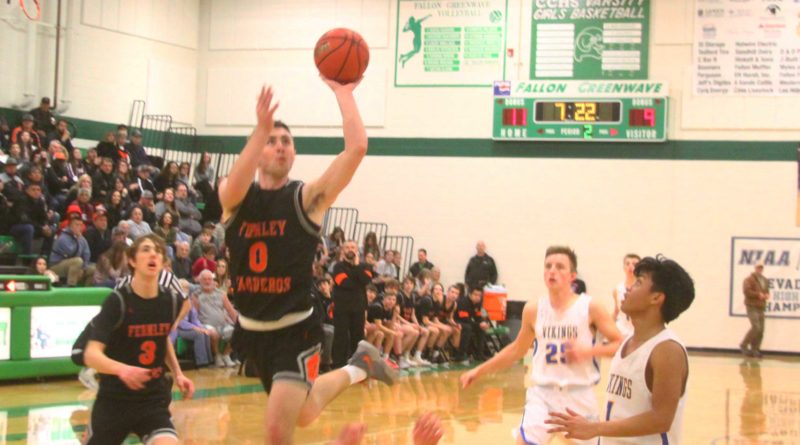 A season where the deck seemed to be stacked against them most of the way ended in a similar fashion for the Fernley High School boys basketball team.

After trailing by 11 points in the first half, the Vaqueros cut the deficit to three on three different occasions in the second half, only to see a flurry of fouls, turnovers and bad breaks go against them down the stretch culminating in a season-ending 58-49 loss to South Tahoe in the first round of the Northern 3A League Tournament in Fallon last Thursday.

“It’s kind of been the story of the year,” coach Derek Miller said. “We had a lot of close, tight games and we just didn’t make the plays when we needed to down the stretch, but I was really pleased with the effort.”

The Vaqueros began the season missing two starters for the first month because of injuries. After a 48-point loss to Reno in a nonleague game on Jan. 3, the Vaqueros stood were 2-7 overall and 1-4 in league play.

The return to action of Drew Miller and Isaac O’Neill, who had missed the first month with ankle injuries, sparked a renaissance that saw the Vaqueros climb above .500 in league play at 6-5, before a tough stretch run saw them finish league play at 8-10 and as the fifth seed for the league tournament.

One of the games in that 2-7 start was a 100-49 loss at Lowry in the league opener, that served as a baseline that demonstrated the team’s improvement throughout the year.

“We end up beating that team the second time we played them,” Miller said. “It felt like we were playing catch up most of the year, but it’s just a good, solid group of kids. We battled, so I was proud of our guys.”

The Vaqueros had lost by 25 in their first meeting against South Tahoe, and again 63-51 in their last game of the regular season.

Thursday, though, they found themselves trailing just 36-33 when Carson Kinston converted a steal into a layup with 4:06 left in the third quarter.

South Tahoe scored seven straight points to push the lead back to double digits, at 44-33, but Tucker Hall converted a three-point play with a layup and a free throw to make it 44-36 going to the fourth, then he hit a 3-pointer to open the fourth quarter to pull Fernley back within 44-39.

Baskets by Daunte Ceresola and Kingston each pulled Fernley back within three, the last time at 46-43, with 5:16 left, but in between, a series of misfortune befell the Vaqueros.

A charging foul on Kingston nullified what could have been a three-point play, and the Vaqueros were also called for traveling, another offensive foul, and a palming violation on successive possessions.

“Every time I thought we were gonna get over the jump, something happened,” Miller said. “We’d get a foul, or a loose ball would go their way.”

Kingston was then whistled for his fifth foul with 4:23, but even without their leading scorer, the Vaqueros answered each of South Tahoe’s next three scores, with a basket by Drew Miller, two free throws by Ceresola, and a layup by O’Neill after stealing an inbounds pass, the last making it 53-49 with 1:08 to play.

But South Tahoe hit five of six free throws down the stretch to put the game away.

The Vaqueros were playing shorthanded again because of an ankle injury to Anthony Thompson, robbing them of a starter who normally plays heavy minutes.

That left the Vaqueros again relying on several younger players to fill the void. In a way, that made Thursday’s game the first game of next season.

“We’ve got a lot of guys back, we brought some kids up (from the JV team) to practice and they came and sat with us just to get a feel for what it takes,” Miller said. “I think it kind of lights a fire for them. And honestly, some of those guys wouldn’t have had a chance to play if we hadn’t had guys get hurt.”