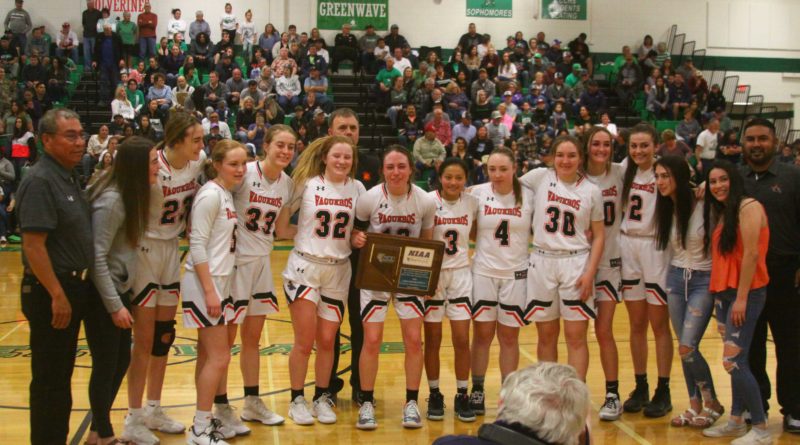 After marking off a pair of achievement last weekend that hadn’t been done in a long time, the Fernley High School girls basketball team will set its sights on another that has never been done in school history.

The Vaqueros beat Spring Creek 50-48 in the semifinals of the Northern 3A League Tournament in Fallon last Friday night, to earn the program’s first trip to the state tournament since 2012. The next night, they beat Truckee, 50-47, to win the school’s first league championship since 1998.

Fernley has never won a state championship in girls basketball, but the Vaqueros will get the chance to change that this weekend.

They will face Pahrump at 6:50 p.m. Thursday at Reno High School in the semifinals of the 2020 NIAA / One Nevada State Basketball Championships. Truckee will play Moapa Valley in the other semifinal, and the winners will square off for the championship at noon Friday at Lawlor Events Center.

“We’re playing for state, and school history and all that, but in my head it’s just another basketball game and we’ve got to go out and play our game and we can’t overhype it and jinx ourselves,” Fernley senior Jaiden Sullivan said.

As the Vaqueros set up offensive end of the floor coming out of a timeout with possession of the ball for one final shot in a 48-48 tie, Karli Burns took her place on the right wing. Celeste Condie took the ball on the left sideline for the inbounds pass, while Willow Jacobson posted up on the left block.

Sullivan lined up near the head of the key, and as Condie looked to throw the pass inbounds, Sullivan broke to the sideline to give her a clear angle for a pass. Instead, Condie lofted her pass to Jacobson, who spun toward the middle of the floor and put up a shot that bounced off the right side of the rim. From the weak side, Burns cut underneath her defender, and had perfect position as the ball caromed right to her for the putback from just inside the right block.

The basket, with 2.6 seconds left in the game, sent the Vaqueros to the state tournament and into a state of near delirium.

“That was a feeling like no other, really,” Burns said. “I’ve never felt that much excitement and joy in my life. I was just overjoyed.”

Burns said she wasn’t expecting to get the ball as she cut to the basket.

“The ball was supposed to go in when Willow shot it,” she said. “My basketball IQ just kind of kicked in and I got backside.”

That the game came down to a last-second shot might have been a surprise to many observers, given that the Vaqueros came into the game with an 18-0 league record. Spring Creek came into the league tournament as the No. 4 seed and narrowly squeaked by Elko in a first round matchup, but the Spartans had tested the Vaqueros much more than the 11 and 13-point margins of victory in their two regular-season matchups. Plus, the Spartans playoff seed was due in part to the midseason suspensions of several players, who returned late in the season. The Vaqueros went into Friday’s semifinal game expecting a battle.

“They should have been second seed, but they went through some adversity through the middle of the season that kind of dropped them down a couple places,” Sullivan said.

The Spartans took the game to the Vaqueros early, mixing in a couple fast breaks with some good ball movement in the halfcourt, to take a 14-11 lead after a quarter.

Spring Creek regrouped and was ahead 38-36, until the Vaqueros scored the last five points of the third quarter, the last four coming on a shot from the right block by Jacobson on a similar inbounds play as the games final possession, followed by a tip in just before the buzzer to end the quarter with Fernley up 41-38.

Another basket from the right block by Jacobson and two free throws by Dimick resulted in a 48-48 tie with 1:36 left.

The Vaqueros dribbled the clock down to six seconds before calling time out to set up the final play.

“This has been our dream to go to State for I don’t know how many years, so it’s just a dream come true,” Condie said. “It was really special and great, but that kind of had a lot of added pressure on us that we couldn’t come in here and just lose the first game.”

Having just done what no Fernley girls basketball team had done since 1998, the members of the 2020 3A Northern champions took turns posing with friends, family and teammates for pictures with the regional championship plaque, to capture in images the unbridled joy and preserve the memories that are sure to last a lifetime.

After trailing on three occasions by as many as nine points, the Vaqueros turned up the defensive intensity, stopping cold a Truckee attack that for two and half quarters had torched them from 3-point range.

The Wolverines hit six 3-pointers in the first half, the last a halfcourt buzzer beater by Annika Thayer that gave Truckee a 30-26 halftime lead. Truckee’s first two baskets of the second half were also 3-pointers, stretching the lead to 36-29, but from that point on, the Wolverines didn’t connect on another triple. But when Lauren Tanner made two free throws with 4:33 left in the third quarter, the Wolverines had their largest lead of the game at 38-29, a margin they matched twice more, the last at 42-33, with 2:52 left in the third quarter.

From that point on, it was Fernely’s fullcourt pressure, not Truckee’s shooting, that dictated things the rest of the way.

“We were switching and they weren’t communicating as well as they should have been, and we just told them not to switch anymore, just stay on your man and you guys will be fine,” coach Tom Kingston said. “We played tighter defense in the second half.”

The Vaqueros were swarming to the ball and denying passing lanes, resulting in a multitude of deflections, that suddenly started turning into steals, and the Vaqueros erased the deficit in less than two minutes.

“Once we start getting deflections and we get a few fast breaks, it really gets our momentum going,” Sullivan said. “When that happens, it just gets us all going and normally it’s all uphill from there.”

A 3-pointer by Burns with 2:42 left in the third quarter started a 10-0 run, which included two layups by Jacobson after steals, and another by Sullivan. Jacobson then capped the run with a jumped with a toe on the 3-point line with 1:00 left in the quarter for Fernley’s first lead since they had been up 26-25 in the final minute of the second quarter.

The Vaqueros went to the fourth quarter leading 46-45, where both teams went ice cold from the floor. Neither team made a field goal in the fourth quarter. The Vaqueros made four of six free throws in the period, while the Wolverines made both of their attempts. The Vaqueros missed their last two attempts, however, both the front end of a one-and-one, giving Truckee one last shot, but a 3-pointer by Elena Friedman circled the rim and came out. The rebound went out of bounds off of Fernley, but the Vaqueros forced a turnover, and were able to inbound the ball and run out the clock before Truckee could foul.

Afterward, the Vaqueros took turns posing for pictures with the championship trophy, in groups, and individually.

“It means the world,” Condie said. “It’s just another step closer to the ultimate goal and I think if not our first, one of our first, zone championships ever, so it’s just great to make history for our school like that.”

“We’ll definitely be talking about it, when we’re telling our kids about when we used to play basketball,” Sullivan said.

Now, having won regular-season and tournament championships, the Vaqueros can set their sights on the third of their three season-long goals. No matter how that turns out, they’ve earned a spot in the Fernley High School annals, and they’ll always have those pictures to prove it.

“It’s there forever,” Kingston said. “You can never forget these moments, and no one can ever take it away from them. To be there in Fernley Vaqueros history, it’s just outstanding.”