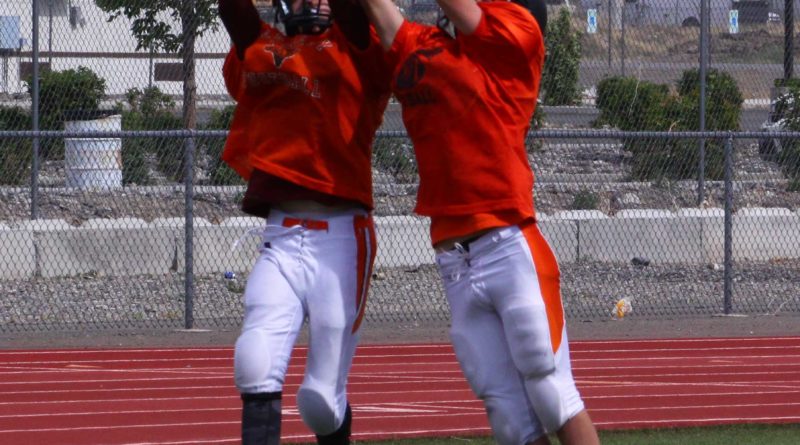 With 16 days to prepare for their season-opening game at Bishop (Calif.), the Fernley Vaqueros will hit the field for their first official practice of the 2019 season Wednesday afternoon.

Players will check out their equipment and turn in all paperwork for the upcoming season Wednesday morning, as well as take their preseason drug tests and impact tests, which are used in part to evaluate potential concussions during the season.

The beginning of practice follows the end of summer conditioning last week, which included the annual Eastern Oregon University camp held in Fernley in June.

This year’s camp was smaller than in years past, because three teams that participated last year didn’t come this year. Yerington, Lowry and Coral Academy were unable to attend. Fernley coach Chris Ward said scheduling conflicts prevented Yerington, Coral Academy and Sparks, which was invited to attend for the first time from participating, while Eastern Oregon coach Tim Camp said Lowry wasn’t going to have enough players to make the trip worth it.

Lovelock brought 17 players and White Pine, attending for the second consecutive season, brought 26. In addition, Smith Valley attended for the first time and brought a little more than a dozen players, and one Silver Stage player attended on his own.

While the Eastern Orgon coaches focus camp instruction on technique and fundamentals, Camp said having fewer players there game him and his assistant coaches more opportunities to work one on one with players.

“I’d like to see the numbers, but any kid that wants to be coached, we’re going to coach him,” Camp said. “If we get the individuals in then they can become better players within their units.”

Although Camp played offensive line at Oregon State, Ward said he is knowledgeable about teaching techniques and fundamentals of every position. Camp often bounces between position groups to demonstrate things, while his position coaches work with their groups.

“I even saw him helping our kicker,” Ward said. “The guys knows all phases of the game.”

For the Vaqueros, Ward said the camp provided the perfect opportunity to institute some new wrinkles into the team’s offense he picked up in offseason coaching clinics. One of the changes was a formation with both offensive tackles on the same side of the formation, and explain how each player’s responsibilities and reads on who to block work the same as in its base flexbone formation.

The camp also gives the Eastern Oregon coaches a chance to evaluate players, and they have successfully recruited several players who have attended the camp in Fernley the past few years. One of those players, Fernley’s Anfernee Sloan, is a graduate assistant at Eastern Oregon after completing his career there as a defensive back. Sloan worked extensively with the receivers and defensive backs at the camp, and said he hopes this is his first step toward becoming a college coach.

Lonnie Slapinski, a 2018 Fernley graduate, is a redshirt freshman offensive lineman for Eastern Oregon who enters fall camp No. 1 on the depth chart at right guard for the Mountaineers. Slapinski helped the Vaqueros as a volunteer throughout the summer.

“There’s a handful of kids here I’ll have a conversation with before we leave,” Camp said. “All of our Nevada kids have been great kids and it’s great football down here.”

Wednesday’s practice is the first of three days of the NIAA-mandated heat acclimation period, where teams practice without pads. They are scheduled to practice at 7 a.m. the rest of the week, then hold double practices next week before teachers return to school next Friday, and practices will switch to the normal after school schedule.