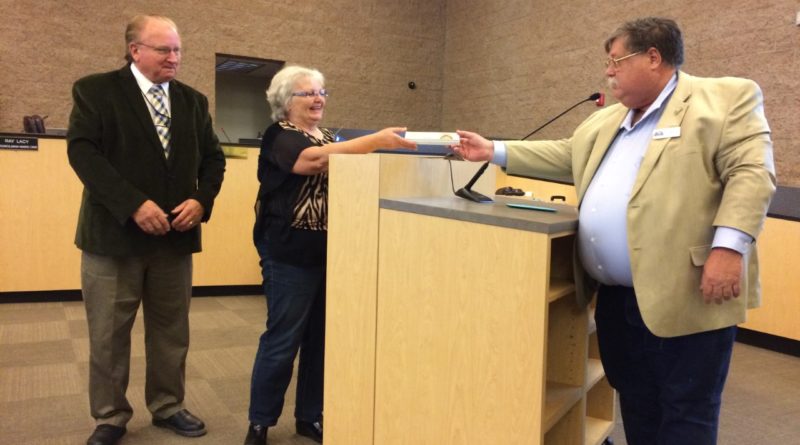 In her final meeting before moving out of state, resigning Ward 4 City Councilwoman Sue Seidl was presented a key to the city and recognized for her service to the city by Mayor Roy Edgington and the other four members of the council.

Seidl has resigned from the council effective Aug. 16, but said she is leaving the area next week and Wednesday’s council meeting was her last.

The council is scheduled to interview five applicants to replace her at a special meeting next Tuesday, Aug. 13. William (Bill Burrows), Timothy Creiglow, Scott Gillespie, Wendell Stafford and Albert Torres are the applicants to serve the remainder of Seidl’s term, which expires in December 2020.

Seidl moved to Fernley in 2006, was elected to the council in 2012 and reelected in 2016, and was a fixture at council meetings as a citizen before running for office. She lauded the changes the city has made during her time in Fernley.

“I’ve been coming to council meetings for about 10 years and it’s amazing the changes in staff in that time,” Seidl said. “I leave her feeling really happy that Fernley is in a good place because of the great staff we have.”

She also urged the council to select the most qualified applicant to replace her.

“That hasn’t always been the case in the past because of politics,” Seidl said.

In lieu of a plaque, typically presented to outgoing council members, Seidl asked instead for a key to the city, saying her mother was presented a key to the City of Reno, and her mother’s key is one of her most prized possessions.