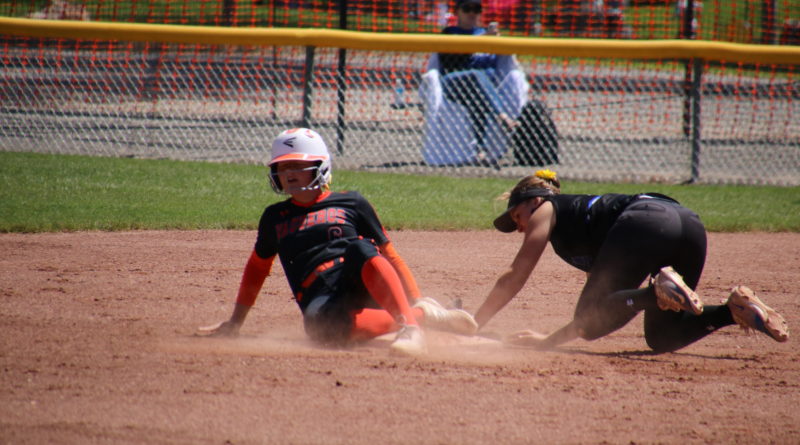 Behind a pair of shutout performances and a hot lineup, the Fernley High School softball team swept through the Northern 3A League Tournament last weekend in Elko.

They’re hoping the same recipe cooks up a state title this weekend.

The Vaqueros won the league tournament last week beating Dayton 8-0, Lowry 6-4 and Lowry again 10-0 to advance to this week’s 3A State Tournament in Mesquite. They will face Moapa Valley in their first round game at 4:30 p.m. Thursday at Virgin Valley High School.

“The girls were really excited,” coach Diane Chapin said. “We went back to last year not making it out of the regional tournament and focused on making sure that did not happen again.”

Chapin said the Vaqueros put all aspects of the game together and played well throughout the league tournament.

McKenna Montgomery tossed a complete game two-hitter with 10 strikeouts and no walks and also drove in four runs to lead the Vaqueros past Dayton in the first round last Thursday.

Montgomery blasted a two-run home run in the bottom of the first inning scoring Aschlynn Roemer to stake Fernley to a 2-0 lead and provide all the runs the Vaqueros needed.

A two-run single by Roemer in the fifth inning sent Colby Johnson and Macie Kirk to the plate and made it 4-0. In the sixth, Kirk doubled in Katelyn Bunyard and Johnson to stretch the lead to 6-0, and Montgomery singled in Reese Jones and Kirk for the final two runs.

In Friday’s semifinal game, the Vaqueros scored four times in the fifth to break a 2-2 tie and held on to beat Lowry 6-4.

The Vaqueros scored first when Reese Jones scrambled home on a wild pitch for a 1-0 lead in the bottom of the first inning. A groundout by Kirk in the third inning scored Jones to make it 2-0, but Lowry tied the game with a two-run home run by Sierra Maestrejuan in the top of the fourth.

In the fifth, Kirk singled home Johnson to break the tie, then in the fifth, Reese Jones scored on an error as she was stealing third base, and Roemer followed with a double to score Kirk to make it 5-2.  Skylar Gothan finished the rally with a sacrifice fly to score Roemer.

Lowry scored a run on an error in the sixth, and another in the seventh but Montgomery, who had entered in relief of Abby Abrahamzon, struck out Maestrejuan with runners on second and third to end the game.

Lowry fought off an elimination game to reach the championship game, but Montgomery tossed another two-hit shutout.

As they had the first two games, the Vaqueros struck first, scoring twice in the first inning, on a fielder’s choice on a ball hit by Montgomery, and a sacrifice fly by Natalie Stewart.

They then exploded for eight runs in the fourth. Johnson started it off with a leadoff home run, Stewart added a two-run single, and Catelyn Creiglow made it 8-0 with a three-run home run. Johnson then ended the rally with her second home run of the inning, a two-run shot to center scoring Braelyn Birkle.

“We kind of put everything together in all aspects of the game,” Chapin said.

Chapin said the season schedule, which allowed the Vaqueros to play a tournament in Las Vegas late in the season, helped prepare the Vaqueros for the postseason.

The Vaqueros have not faced Moapa Valley or Pahrump, the two South representatives in this year’s state tournament, and Chapin said she isn’t sure how strong their pitching or how powerful their lineups are. She said the Vaqueros will have to adjust quickly to whatever is presented to them.

“It’s going to be a good tournament and it will come down to who is gelling at the right time,” she said. “Luckily, we had that over the weekend.”