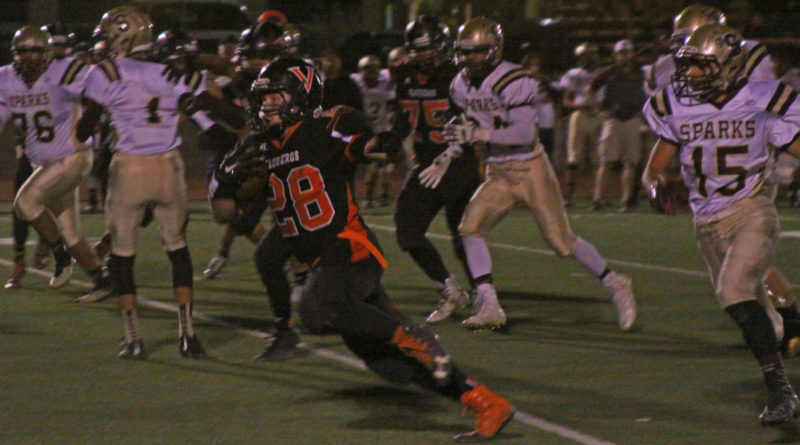 Fernley football coach Chris Ward has been saying all season that when the Vaqueros quit making mistakes, they can be a pretty good team.

For a 15 minute stretch in the second and third quarters Friday night, they showed exactly what he’s been talking about, and wound up with a 46-20 win over Sparks.

The Vaqueros ended a two-game losing streak and are now 2-3 for the season, while Sparks dropped to 1-4.

“Is that what it was? That’s not bad,” coach Chris Ward said, adding that he hadn’t been aware the Vaqueros scored that many consecutive points. “I kind of lost track in there.”

Ward may not have been able to keep up with the scoreboard operator, but he liked what he saw happening on the field, particularly during that explosive stretch when Fernley took control of the game.

“We finally played a decent game, so that’s good,” he said.

Sparks scored two touchdowns in 1:11 to take a 13-7 lead with 10:45 left in the second quarter, on an 8-yard run by Hunter O’Meara and a 42-yard fumble return by Nick Van Patten. A fumbled option pitch bounced straight to Van Patten, and the three-time state 300-meter hurdle champion took it in untouched.

“I think we well one time too soon on that play,” Ward said. “They just shot that thing and we got to take advantage of it if they’re going to be coming that hard on things. And we did a couple times.”

On the first play of Fernley’s next possession, Zach Burns took an option keeper around the right side for 54 yards, to the Sparks 26. Three plays later, he hit Ren Arroyo for a 26-yard touchdown that tied the game at 13.

Next time Fernley got the ball, Burns took another option keeper around the right side, and this time nobody caught him, scoring on a 66-yard run.

After Gabe Richards picked off a pass by Saprks quarterback Cody McAbee, and five plays later, Burns connected with A.C. Reyes for a 35-yard touchdown for a 26-13 lead.

Burns and Reyes connected again for a 4-yard touchdown with 45.8 seconds left in the half, after a fumble and a facemask penalty gave Fernley the ball at the Sparks 10-yard line.

Fernley finished its outburst on its second drive of the third quarter. A 13-yard punt gave the Vaqueros the ball at the Sparks 35, and on the first play of the drive, Willy Pritchard burst through the middle for 33 yards to the 2, then took it in on the next play for a 40-13 lead.

Carlos Rodriguez returned the ensuing kickoff 93 yards for a touchdown for Sparks, and Fernley finished the scoring with a 6-yard pass from Burns to Sam Ramirez with 5:05 left in the game, after yet another Sparks turnover, an interception by Arroyo that he returned 29 yards to the Sparks 14.

After turning the ball over 19 times in the first four games, the Vaqueros turned it over just once, the fumbled returned for a score by Van Patten. Instead, Sparks turned the ball over five times, including four interceptions.

“It was nice to get a couple going our way,” Ward said.

On offense, the Vaqueros got big plays offensively from Burns, Arroyo, Pritchard, Reyes and Ramirez.

“That’s kind of what we like doing,” Ward said. “Being an option team you do spread it around. We like to get all those kids touches.”

O’Meara had run for 448 yards on 62 carries in his previous two games, against Dayton and Elko, but had just 59 yards on 18 carries against Fernley, and that was the aspect of the game that was most pleasing to Ward.

“We were more worried about the ground game than the passing game,” Ward said. Sparks completed just two passes, for 17 yards.

After two consecutive losses, the win puts Fernley back on track to compete for a playoff berth with four games remaining. The Vaqueros host Spring Creek on Homecoming next Friday.

“I think it’s going to give our kids confidence,” Ward said. “I think we were a little shaken in our confidence, but we were also ticked off too because we knew that we could play better. We knew that we pretty much gave two games away that we shouldn’t have, just through stupid mistakes and things like that, and we finally came out and played some football.”

Spring Creek is tied with Truckee for the league lead at 5-0, while Truckee and Elko are both 4-0, but meet today in Truckee.

After having several players missing the past couple of weeks because of a variety of injuries, and a flu bug that has caused several players to miss practice, Ward said he hopes to have most hands on deck next week.

“We’ve been battling the flu and injuries,” he said. “I think we’re going to pick up two, maybe three, defensive ends next week that we’ve been short on. We’re going to be a lot healthier this week.”

“Great game for the guys,” coach Gary Stone said. “Jared Caulk has really stepped up as a leader on defense. He demonstrates a great understanding of the game, and he learns quickly. He may be the defensive coach by the end of the year. I’ll be his assistant. All of our players got in today and had a chance to compete. Cooper Henderson and AJ Kuha had multiple big plays. Coach Tony Wilson called a great game on offense. We are lucky to have about eight different players who can truly threaten defenses. And, they are working behind a tough and intelligent offensive line. This a great group to be around. Quality people.”