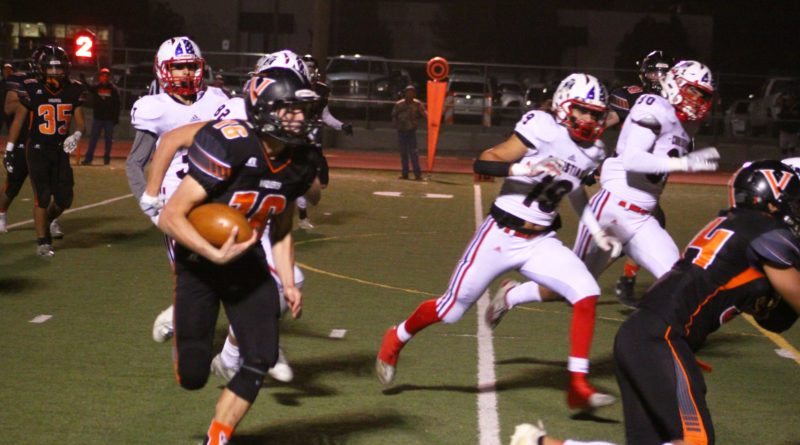 Thanks to Fallon’s win over Lowry last Thursday, the Fernley Vaqueros took the field for their final regular season game of the season last Friday night against El Cajon (Calif.) Christian knowing they will be the No. 2 seed and get a bye this week for the first round of the Northern 3A playoffs.

Friday’s game was even more cause for celebration.

The Vaqueros closed the regular season in style, with a 45-30 win that was not nearly as close as the final score.

“I thought we played well,” coach Chris Ward said. “I was a little bit surprised but man, we did well up front.”

Fernley had so many big plays that despite 364 yards of total offense, they made only nine first downs.

Fernley scored on five of their first six possessions, and it might have been all six except a Miles Steele run on fourth-and-9 from the Christian 34-yard line was stopped a yard short of the first down on Fernley’s opening drive.

After a Christian fumble at the Fernley 42, Brandon Reyes broke loose for the first of Fernley’s big plays, a 58-yard touchdown to make it 6-0 with 7:50 left in the first quarter.

Christian couldn’t convert a fake punt from its own 15-yard line, and Reyes made them pay with his second score, from three yards out, for a 13-0 lead with 5:06 left in the quarter.

An interception return for a touchdown by Kyle Jones was nullified by a roughing the passer call, and on the next play, Christian quarterback Gabriel Krug broke loose for a 56-yard run to the Fernley 9, setting up his 2-yard score that made it 13-7 with 1:44 left in the first quarter.

Reyes scored his third touchdown, a 25-yarder, with 26.8 seconds left in the quarter, Anthony Thompson followed with a 53-yard touchdown with 8:22 left in the half, and Jack Knodell added a 40-yard field goal 3:33 before the break. That made it 31-7.

If it wasn’t clear then the Vaqueros had the game in hand, it was when Miles Steele and JR Reyes connected on a 31-yard touchdown pass to make it 38-10 with 2:50 left in the third.

Fernley’s last score came when, after a Christian touchdown cut it to 38-17, an onside kick went straight to Thompson, who hesitated a second as if unsure what to do, then raced 50 yards for a touchdown.

Reyes wound up with 220 yards rushing on 14 carries, putting him over 1,000 for the season. Steele, who needed 36 yards to reach 1,000, had 22 yards on just six carries, again relying on the dive and the pitch because of a 3-man defensive front that limited his opportunities.

“Miles read the option and Brandon stuck it in there hard,” Ward said. “What I like about it is Miles, he’s still giving the ball if it’s open, he’s not trying to be greedy or anything like that. He was reading it well.”

Forced to add a nonleague game to end the season because of Dayton’s withdrawal from the Northern 3A, Ward said the Vaqueros wanted not just to play the final week of the season, but to play against a foe that would give them a good test. Despite the blowout, he said Christian was that.

“We wanted someone that was solid, and I still think they are pretty good,” he said. “I think that will carry us over into the playoffs really well.”

With the first round by this week, the Vaqueros will have two weeks to prepare for their first playoff game, against the winner of this week’s game between Elko and Truckee. Ward said they will focus their work this week on what the teams have in common. But either way, Ward said the preparation isn’t altered much no matter which team wins.

“Defensively we rely on keys and reads, and offensively, the option makes preparation really simple,” he said.