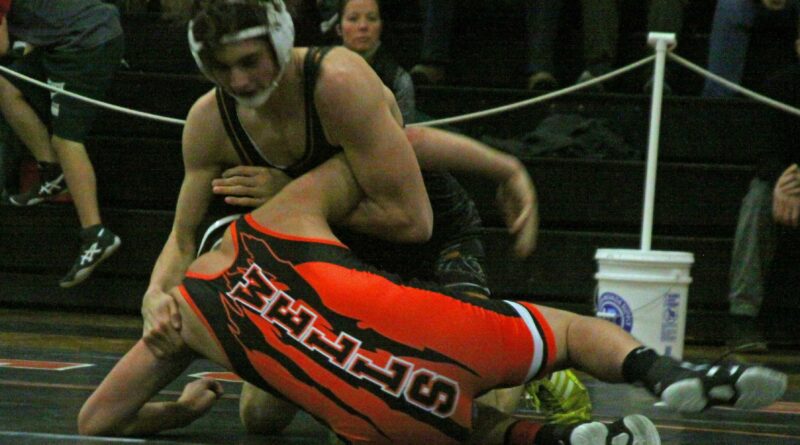 Tyler Slaughter, Nathan Glass, Kale Kreller and Brandon McCullar each won their weight classes, while Austin Kollar and Lucas Jurich both finished in fourth place and Harley Denison was fifth.

As a team, Fernley scored a total of 169.5 points, but were edged out for third place by a half point by Spanish Springs.

“It came down to the last match of the tournament where Spanish Springs needed a pin to pull ahead and they got it,” Fernley coach Ernie Garcia said. “Although it was not a match against Fernley so there wasn’t much we could do.”

Individually, Slaughter was the champion at 285 pounds, despite weighing much less, while Glass was the 220-pound champion, Kreller finished first at 195 pounds and McCullar won the 170-pound title.

“Four of our five seniors won their weight classes in dominant fashion, with all of them pinning their way through the tournament,” Garcia said. “It was fun to watch them run through their home tournament in front of all of their family and friends.”

Garcia said he was also pleased with Jurich.

“He is finding a ton of confidence on his feet and is taking everybody down,” Garcia said. “A couple more adjustments and he’s going to be a huge problem for everyone.”

Garcia said he was especially pleased to see the fight in each of the wrestlers after the previous week’s tournament at Spring Creek was canceled, the second tournament that has been canceled this season,

“We were in just about every match,” he said. “With just a couple of adjustments, we can turn a lot of our losses from the weekend into wins when it matters most.”

The Vaqueros were shorthanded for the tournament, with many of their wrestlers in the lower weight classes sitting out. Garcia hopes to have them all back in time for the Divisional Duals and Region Tournament.

The Divisional Duals are scheduled Feb. 4-5 at North Valleys, with the Region Tournament the following weekend in Spring Creek.

“We’ve got a couple of weeks before we compete in league duals but I’m excited to see what we can do with a full lineup,” Garcia said.