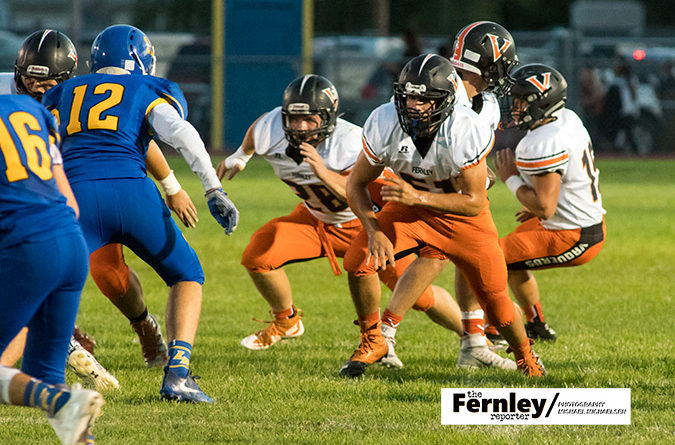 After playing its first three games on the road, the Fernley High School football team will make its home debut Friday when it hosts South Tahoe.

The Vaqueros will be looking to avenge two losses to the Vikings last season, including a 35-7 loss in the first round of the Northern 3A playoffs last October.

The Vaqueros enter with a 2-1 record, 2-0 in the Northern 3A after taking a 44-0 win at Lowry last Friday night. That win came on the heels of an exciting comeback win at Fallon the previous week, and has the Vaqueros playing with confidence and momentum, coach Chris Ward said.

However, Ward said the Vaqueros still aren’t firing on all cylinders, and he said the focus this week has been cleaning up some recurring assignment errors.

“We still have some things we’re not doing quite right, some errors that we need to get cleaned up this week,” Ward said.

At Lowry, the Vaqueros took a 30-0 lead at halftime and most of the second half was played with a running clock

Zach Burns completed 5 of 11 passes for 132 yards, but three of the completions went for touchdowns.

Cooper Henderson got some time at quarterback and completed his only pass for a touchdown and ran for 63 yards and a touchdown on eight carries. He also caught a 20-yard touchdown pass.

The shutout was Fernley’s first since a 57-0 win over Sparks on Sept. 26, 2014. Ward said the Vaqueros have had a few games since then that could have been shutouts if they hadn’t substituted with some late leads.

He credited defensive coordinator Scott Gillespie and assistant coach Jake McCullar with coming up with the plan to stop a Lowry attack that was much different than the Vaqueros’ first two opponents.

While the numbers on the scoreboard and in the stat book looked good, Ward said the Vaqueros made some lingering mistakes that would hurt them against the better teams on their schedule, like the Vikings.

“I think we can execute much, much better,” Ward said. “We see flashes.”

South Tahoe comes into the game with a 1-1 record, both overall and in league play, having beaten Sparks 53-7 and lost to Spring Creek 38-12.

Ward said the Vikings were the most athletic team in the league last season, and feature 6-foot-5 receiver McCallan Castles, who has committed to play at Cal. Castles caught 65 passes for 1,193 yards at 15 touchdowns last season, and was a particular matchup problem for the Vaqueros last year.

Ward said the Vaqueros will try some different things to defend Castles, but said they have to beware of affording him too much attention and leaving others open.

Offensively, Ward said the Vaqueros want to get their rushing attack going consistently.

“We take what the defense gives us,” Ward said. “But when we establish the run, that opens up just about everything off that.”

Ward said the Vaqueros are excited about playing South Tahoe again, but said to win, they will have to play better than they have so far this season.

“They beat us twice last year, but we felt like a lot of it was more what we did or didn’t do than they did to us,” Ward said.

And he said the coaches have showed the players video of the assignments they have missed, and how much better they can still play.

“I think right now they’re kind of seeing how good they could be, and I think they’re starting to get excited about it,” he said.