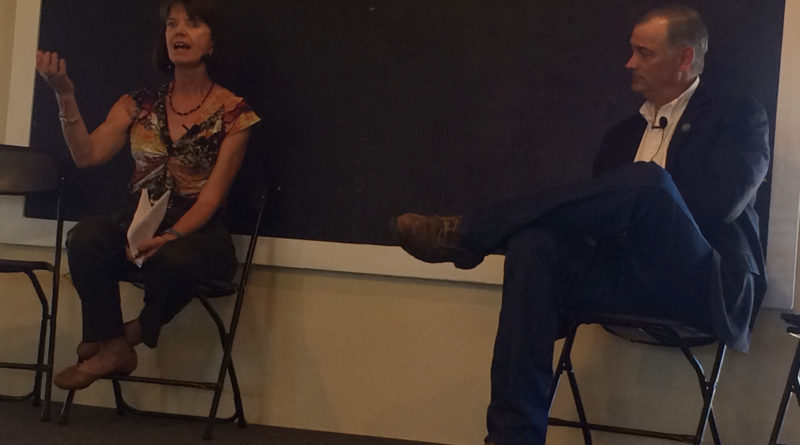 The City of Fernley came up empty during the 2017 session of the Nevada Legislature in its latest attempt to get a greater share of the state’s Consolidated Tax allocation.

Speaking at the weekly breakfast meeting of the Fernley Chamber of Commerce Ambassadors, Assemblywoman Robin Titus and State Sen. James Settelmeyer had little advice to offer for the city’s next step.

Titus and Settelmeyer told the Ambassadors the session was not a good one for Nevada. Settelmeyer called it a “nationally political” session that pushed through a liberal Clark County agenda.

“It was the most business unfriendly session ever,” Settelmeyer said.

Titus said only 19 Republican bills were passed in the entire session, out of a total of 560 that were introduced.

Two of those that fell by the wayside were the strongly supported by the City of Fernley, Assembly Bill 311, which would have removed the requirement of having a police department for eligibility for Consolidated Tax, and Senate Bill 439, which would have allowed some rural counties to place a question on the ballot to tax diesel fuel.

“The diesel fuel tax was a wonderful bill that should have been passed,” Titus said.

AB 311 was sponsored by Titus at the request of the city, but the bill never gained traction and was never heard on the Assembly floor.

Fernley has run into opposition from Lyon County in its quest for more C-Tax money, and she said the city will have to find some sort of solution that the county will support in order to move forward.

“If you think you’ve met a roadblock from the county folks, talk to the Clark County folks,” Titus said.

The C-tax is a composite of cigarette, alcohol and other taxes and is distributed to cities counties, and other jurisdictions throughout the state. The city received about $140,000 in the last fiscal year, while other cities of similar size received several million.

Titus said that if the C-Tax distribution were changed to give counties and cities an equal share per resident, Clark County would get even more money than it does now, while many other jurisdictions would lose money.

“Does the whole C-Tax need to be redone?” Titus asked. “Yes it does, I think, but a lot of communities out there would lose money.”