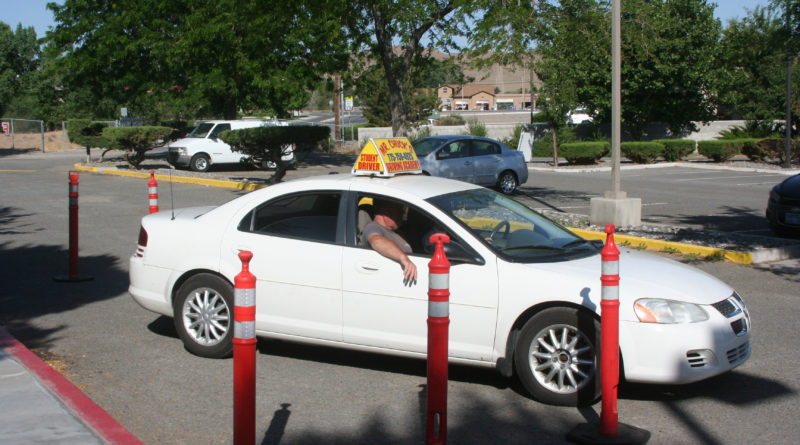 The 17 driver’s education students in the classroom at Fernley Intermediate School were paying various degrees of attention when Zero Teen Fatalities program manager Kevin Moore cued up the video monitor during a classroom session at Mr. Chuck’s Driving Academy on June 21.

But the students’ attention became rapt when Moore asked them how many had noticed what happened to the driver when the video showed a car careening wildly out of control and sideswiping a convertible on an open freeway.

The video was one of several that Moore showed, most recorded from dashboard cameras showing the often disastrous results of common mistakes drivers make.

Moore said the videos are meant to teach the young drivers to be responsible drivers and that driving is serious business.

“I want them to enjoy driving, but take it seriously,” Moore said. “We just entered the 100 deadliest days for teen drivers, from Memorial Day to Labor Day.”

The classroom session led by Moore is just one aspect of the classes presented by Mr. Chuck’s Driving Academy. The academy is operated by Chuck Ayers, who taught driver’s ed at Western Nevada College for nine years, but left to start his own academy when WNC raised the cost of each session to $100.

Ayers charges $50 for his four-day, 30-hour academy. The course is taught in a classroom setting, except for a brief lesson on parallel parking.

Classroom sessions include presentations such as the one by Moore from Zero Teen Fatalities, as well as the Nevada Highway Patrol, Les Schwab Tires and insurance representatives.

At the beginning of the first class, students take a 15-minute pretest, then they take a the same test at the end of the academy to see how much they have improved.

Ayers is a DMV certified trainer. He began teaching driver’s ed at WNC in 2004, and started Mr. Chuck’s Driving Academy in April, 2014. He charges $50 for the 30-hour course.

He is scheduled to teach 15 classes this year, in Dayton, Carson City, Gardnerville and Minden. The class at FIS was his first in Fernley, requested by FIS dean of students Paul Sullivan, but Ayers said he may add another later in the year.

Moore’s class session focused on driver safety. After showing several videos as part of his lecture on safe driving, Moore took the 17 students into a hallway, where they took turns trying on alcohol impairment simulation goggles. Moore had the students try to walk heel to toe on a straight line, and stand with on one leg with their other foot raised in the air, first without the goggles, then with them, to demonstrate the effects of driving while impaired.

“Do you think you could drive like that,” Moore asked, getting a unanimous chorus of No’s.

“But people are out there driving like that every day,” Moore said.

During the session with tire representatives, the students learn how to check the depth of their tire tread with pennies, and how to read the sidewall.

“There’s a lot of rules I didn’t know,” said Jordan Presley, 16. “This is probably going to help me pass my permit test.”