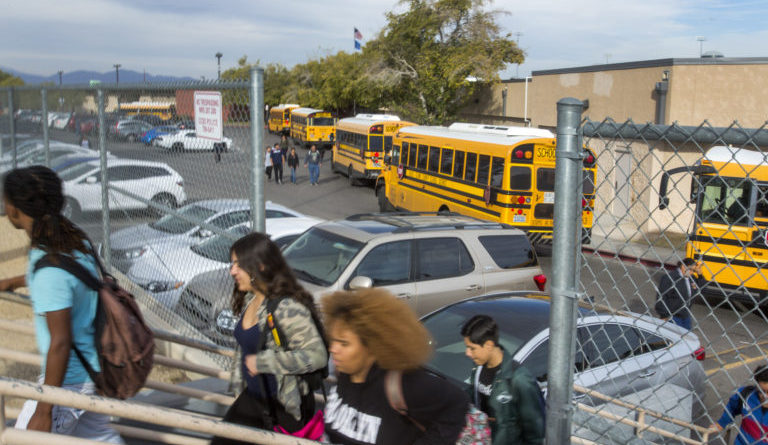 A 25-member group charged with making schools safer got underway Thursday and heard from its largest group of stakeholders — students.

Gov. Brian Sandoval issued an executive order in March creating the School Safety Task Force, roughly a month after a deadly school shooting in Parkland, Florida, rattled the nation and triggered a student-led movement to stop the carnage.

The governor addressed the newly minted task force, which includes two superintendents, principals, teachers, parents, state lawmakers, students and a judge, among others. Dale Erquiaga — the former state superintendent who now serves as president and CEO of Communities in Schools — chairs the task force.

Sandoval said schools should be a warm and welcoming environment for children and an inspirational place where teachers can watch students experience that “lightbulb” moment while learning.

“Sadly, however, times have changed,” he said. “For some, the schoolhouse is now a place of uncertainty. Our children practice what to do if an active shooter is on campus. They watch social media with an even closer eye on the chance that it may foretell violence.”

The group has its work cut out for it. The task force must deliver Sandoval an initial report, with recommendations that could immediately be enacted, and file a final report by Nov. 30. Both will help guide lawmakers ahead of the 2019 legislative session, although the recommendations aren’t binding and a new governor will be at the helm come January.

The tricky part will be money. Superintendents from districts across Nevada already have identified three areas where help is needed, and all come with a price tag:

Salary and benefits for one school-based officer costs roughly $120,000, and that amount doesn’t cover the cost of uniforms, equipment or vehicles, Erquiaga said.

Still, high school students who attended the meeting implored task force members to explore various ways to make their school experience safer. Students who attend the Academy of Arts, Careers and Technology in Reno, for instance, lamented the school’s many glass windows. When they do active-shooter drills, the students barricade doors with tables or cram into tiny supply closets.

Arianna Loya, an 11th-grader at Veterans Career and Tribute Academy in Las Vegas, said an early morning drill caught students off guard because many were walking to class, distracted with headphones, and never even heard the alert.

“I don’t feel safe and secure,” she said. “I feel as if we are sitting ducks in classrooms.”

Task force members also received information from experts who study school violence or policy efforts regarding school safety. The Nevada Department of Education officials noted that student possession of weapons and violence toward school staff have more than doubled since the 2013-2014 academic year.

The task force will form two working groups to zero in on two components of the overall safety conversation — school security and student well-being. The group will meet again in July.