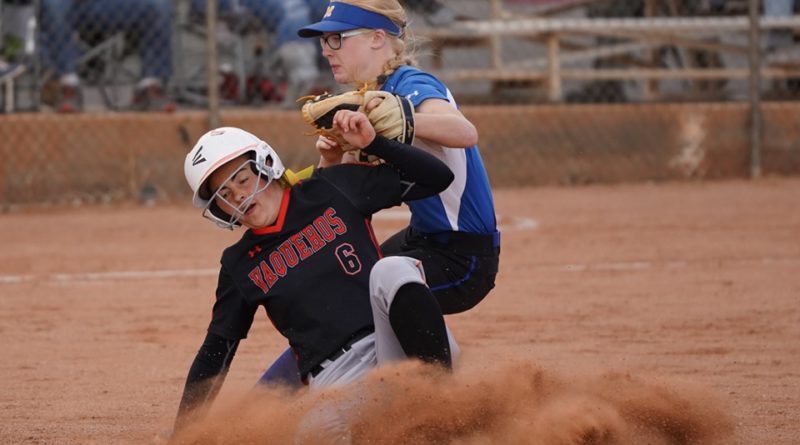 The Fernley High School softball team’s hopes of reclaiming its place atop Nevada 3A softball came to an abrupt and heartbreaking end.

Pahrump’s Kaden Cable hit a 3-run walkoff home run with two outs in the bottom of the eighth inning to complete a comeback from a 4-run deficit to beat Fernley 13-10 in the championship game of the 3A State Softball tournament in Mesquite last Saturday.

“It was just one of those things where we didn’t get enough things to go our way,” coach Diane Chapin.

The Vaqueros took a 10-6 lead to the sixth inning, but saw Pahrump score once in the sixth and three times in the seventh to force extra innings, where Cable blasted a high fly ball that dropped beyond the left field fence. Chapin said she knew when the ball left the bat that it was the game winner.

“Once she hit it was probably, ‘Oh, it’s going to get out of here,’” Chapin said. “It was hit high and it kept going.”

The Vaqueros had taken the 10-6 lead with six runs in the fifth inning. The Vaqueros entered the inning trailing 6-4, and started the rally with walks by Natalie Stewart and Olivia Victor. After a sacrifice bunt advanced the runners, Colby Johnson singled to right field to drive in two runs and tie the game 6-6.

Macie Kirk and Skylar Gothan were hit by pitches to load the bases, and Aschlynn Roemer followed with a double to drive in two and make it 8-6. Two more runs scored on an error on a fly ball hit by Reese Jones.

The Vaqueros had taken a 4-3 lead in the third on an RBI-single by Roemer, an error by Cable and a two-run single by Victor.

Pahrump scored three times in the third to take a 3-0 lead and three more in the fourth to go ahead 6-4.

But despite giving up 13 runs, Chapin said it was the Vaqueros inability to score in more than two innings that was their undoing.

Fernley put runners on second and third in the first inning and didn’t score, had a runner at second with no outs in the second inning, left two runners on base in the third after scoring for runs, two more in the fourth and twice left one runner on base, including in the top of the eighth, when they came up empty.

“We left nine runners on and the hitters we counted all year were struggling,” Chapin said.

The Vaqueros had begun the tournament with an 11-1 win over Moapa Valley Thursday afternoon.

They used the big inning to jump on the Pirates early. Olivia Victor had an RBI-single and the Vaqueros added four more runs on a fielder’s choice, an error and a groundout.

Fernley scored two more runs on an error in the fourth to go up 7-1, then got an RBI-double by Katelyn Bunyard, a run-scoring triple by Colby Johnson and RBI-singles by Jones and Roemer in the fifth to account for their 11 runs.

“We hit the ball and made them make mistakes, and they had first-game jitters and made some mistakes that day that they didn’t make Friday,” Chapin said.

But the Vaqueros’ march to the title game hit a bump Friday, with a semifinal loss to Pahrump, 7-3.

Faced with elimination, the Vaqueros gutted out a 1-0 win over Lowry to reach the championship round.

Fernley’s McKenna Montgomery and Lowry’s Mackenzie Salas-Begay locked into a pitcher’s duel, each allowing just three hits and one walk.

Lowry loaded the bases with no outs, but Montgomery induced a comebacker for a force out at the plate, a pop out and a fly out to get out of the jam.

The Vaqueros threatened in the fourth with a leadoff single by Kirk and Gothan was hit by a pitch with two outs, but a pop out ended the inning.

Lowry put two runners on base with two outs in the top of the fifth, but Montgomery got a strikeout to end that threat.

The Vaqueros finally broke through in the sixth. Jones doubled to center, but was caught trying to steal third, Kirk singled to center and advanced to second on a wild pitch, then scored on an error on a ball hit by Roemer.

Montgomery pitched around pair of runners in the seventh, when Gothan threw out a runner trying to steal second and Montgomery induced a pop out to end the game with a runner on first.

After a season that ended in the regional tournament last year, Chapin said it was a good season overall for the Vaqueros. They went 17-1 in league play, and sere undefeated until the final weekend of the season.

“The girls did a lot of things real well,” Chapin said. “We played a challenging schedule outside of league and did well. It just didn’t quite end where we wanted it to.”