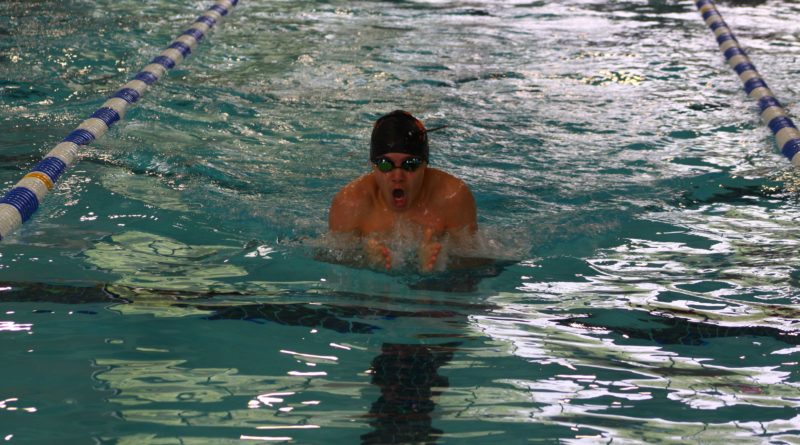 Despite having qualifiers in only three of 24 events, the Fernley High School boys swimming team finished in sixth place in the NIAA State Swimming and Diving Championships held May 21 at the Carson Aquatic Facility.

The Vaqueros scored 22 team points and were the third highest Northern school in the standings.

The same group finished fifth with a strong performance in the 200 yard freestyle relay in a time of 1:44.33. They entered the meet seeded seventh and took 1.43 seconds off their regional meet time.

Mortenson was the only individual qualifier for Fernley. He came into the 100 breaststroke seeded fifth with a qualifying time of 1:09.55, and swam an almost identical time of 1:09.48 in placing fifth.

The State meet capped a successful season for the Vaqueros, who finished the season with 23 of their 24 swimmers qualifying for the regional meet.

“I think we brought more people to regionals than we ever had, but I’d have to look at the records to double check,” coach Matt Adamson said.

The Vaqueros boys team finished fourth at the Regional meet, the program’s highest regional finish, while the girls were sixth, despite putting swimmers into as many different events as possible rather than loading up events to accumulate team points.

“And we probably should have been even higher,” Adamson said. “I swim the regional meet not to place, but to try for this. At regionals I’m not necessarily trying to win, but I’m really trying to get as many as we can to State.”

Swimmers also must qualify for the regional meet by exceeding minimum times during the regular season.

The boys team won six of seven dual meets this season, losing only to Truckee, which won its second consecutive state championship. Mortenson, a freshman, broke school records in the 100 breaststroke and 100 individual medley.

“The girls did good representing themselves too, just not good enough to get here,” Adamson said.

With only three of the 24 swimmers graduating this year, and many of them being freshmen and sophomores, Adamson said the team is looking forward to a bright future and is hoping more people will be interested in joining the team.

High school swimming has traditionally been dominated by those teams that have high numbers of year-round swimmers, and programs like Fernley with swimmers who compete only during the high school season have been at a distinct advantage.

“The fact we don’t have a club in Fernley and we come (to regionals) and finish fourth is kind of amazing,” Adamson said. “It’s a hard sport. Got to have the dedication.”

One thought on “Fernley swimmers take 6th at State”