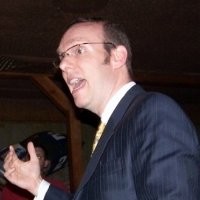 Loren Spivak, “The Free Market Warrior”, will be the guest speaker as the Fernley Republican Women holds its next meeting at the Fernley High School Library, 1300 Highway 95A, on June 19.

A light meal will be served at 6 p.m. and the meeting will start promptly at 6:30 p.m. The public is always invited to attend.

Spivak was born and raised in Massachusetts and spent most of his adult life in New York City. He founded “Free Market Warrior” in 2009 in an effort to make a positive difference in American politics and economics.

His “Free Market Warrior” store was expelled from Concord Mills Mall in North Carolina in July of 2009 for selling material critical of the Obama Administration. Since then, Spivak has devoted his time to teaching conservative groups about free market economics. He conducts “Economic Literacy” seminars across the United States. So far, he has delivered his famous seminar on “Economic Literacy” to more than 200 groups in 20 states.

Spivack is also the author of “The New Democrat”, a parody history of the Obama administration, based on a famous children’s book. With rhyme and illustrations, “The New Democrat” transforms the political personalities of our times into cartoon characters in a conservative morality play.

Spivack’s second book, “The Gorax”, is an anti-environmentalism/pro capitalism parody starring Al Gore and presenting his movement as a threat to American freedom and standard of living. Once again Spivack is both funny and poignant as he makes the case that capitalism (represented by the “Onepercentler”) is the real victim of environmental extremists who destroy prosperity without achieving even their own goals. Along the way, Spivack takes well aimed shots at everything from “The Fed” to the teachers’ unions.

The FRW’s Caring for America/Adopt-a-Soldier Program collects non-perishable foods for the Fernley Food Bank, along with donations of funds and care items for their adopted soldiers. The soldiers need single serving food items, personal care items and, most especially, cards and letters from home. The Literacy Committee collects new children’s books for the Ronald McDonald House and Renown Hospital’s Children’s Ward. All contributions for these important programs will be greatly appreciated. Financial contributions can be sent to the FRW at P. O. Box 412, Fernley, Nevada  89408.