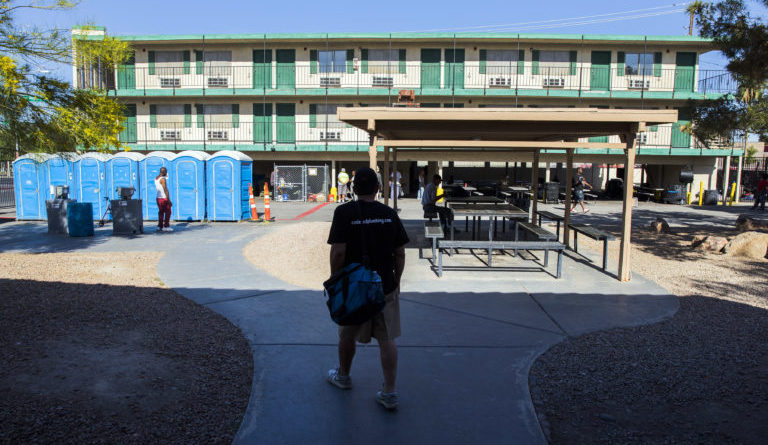 The head of the state’s welfare division had a simple answer recently when she was asked if there was any reason, outside of politics, people with low incomes but with more than $6,000 in assets are barred from applying.

Her answer, which came at a meeting of the Nevada Task Force on Financial Security last month, underscored what activists call a flaw in how the state provides assistance to those most in need of a financial leg up.

Every year, Nevada routinely rejects a handful of applicants for the state’s Temporary Assistance for Needy Families (TANF) welfare program because they have assets — a car, a savings account or other reportable property — worth in excess of $6,000, even if they meet the program’s requirement of income levels below the federal poverty line. The state spends $76 million annually on the program, largely through a $44 million federal block grant, and typically serves around 25,000 people at any given time.

Although Nevada’s overall TANF rejection rate is relatively high (roughly 62 percent of the monthly 3,600 applications submitted in 2016), rejections based on assets consisted of a small percentage — only 20 in all of 2016.

Although the population of individuals affected is small, activists including Prosperity Now’s Holden Weisman, say that keeping the limits in place essentially punishes a marginalized group of people while serving little to no public benefit.

“There could be a downturn, there could be another housing crisis, you never know,” he said. “If that were the case, we want to make sure people can obtain as much assistance as is needed given the current economic condition.”

Nevada’s $6,000 asset limit allows participants to exclude certain key assets, including the value of one car and several investment accounts, including Individual Development Accounts (savings accounts for low-income people to acquire assets), 529 college savings accounts and Coverdell Education Savings Accounts, which are similar to 529s but can be used for education expenses outside of college.

Changing the asset limit has been done before — the state raised its asset limit from $2,000 to $6,000 in 2013 amid pressure from state and national groups and also agreed to remove limits on food assistance programs.

Changing the limits could be done administratively and without direct action by the Legislature, but Naomi Lewis, a deputy administrator with the state’s Division of Welfare and Supportive Services, said the department preferred the flexibility to set its own limit.

Lewis pointed to the case of a Michigan man, Leroy Fick, who won a $2 million lottery in 2011 but was later discovered to still be eligible for food stamps because the winnings were considered an asset — not income. Although Nevada bans lotteries in its Constitution, the prevalence of gambling and slim chances of a person on public assistance winning big were enough of a deterrent to keep the limits in place.

“As a gambling state, we weren’t necessarily comfortable with giving it up. There’s always one or two cases,” she said in an interview. “It is optics, you do have a need to be good stewards of taxpayer dollars, and so that one case — there was changes across the nation in how we do things.”

Although the number of asset-based rejections is small, Weisman said the mere existence of limits on assets created a negative incentive for TANF recipients to avoid saving or building up cash reserves, in case they accidentally surpass the limits and are no longer eligible for the assistance.

All of Nevada’s major public benefits assistance programs — Medicaid, Supplemental Nutrition Assistance Program (SNAP) and TANF — are processed under the same department. Applicants fill out one form that determines their eligibility for each program. Lewis said the department requires applicants to fill out a self-identification form on their assets, but the state doesn’t go to great lengths to check the self-reported forms because most applicants are already in dire financial straits.

“What we find is that individuals who have an income level low enough to qualify for this program are not asset rich,” she said. “They don’t have a bunch of money sitting in bank accounts.”

Recipients of TANF are at either the lowest end of income-earners or don’t report any income at all. They can only receive the maximum cash benefit ($383 for a family of three) if they report no income, with lower assistance amounts for higher income levels, and the maximum earning threshold is similarly low — $1,447 a month for a family of three, which is about 90 percent of the poverty level.

According to a study by the left-leaning Center for Budget and Policy Priorities, the purchasing power of TANF’s cash benefits in Nevada has declined by nearly 30 percent between 1996 and 2017.

Although a majority of states (34) have removed asset limits for eligibility for food stamp programs, only eight states have eliminated asset limits for TANF recipients. Weisman said that the states that eliminated the asset test saw at most a minimal caseload increase, with most seeing no real change to the number of applicants.

A 2016 study by the Urban Institute funded by the U.S. Department of Agriculture found that older Americans tended to make up the majority of asset-rich, income-poor individuals who would be excluded from public benefit programs due to exceeding the limits.

“Older Americans often stand out as having low incomes but substantial assets, because their
incomes drop in retirement but they have built up assets during their working lives,” the study stated.

But TANF enrollment statewide has remained essentially static over the last decade.

According to the most recent numbers provided by the state, Nevada currently has 24,848 TANF recipients, an increase of about 12 percent since the start of the 2007 recession. The recipient total has gone down by less than half of a percent since 2009, although the number has fluctuated up and down over the last nine years.

Although the number of people receiving TANF has stayed roughly flat over the last decade, other public assistance programs have seen skyrocketing participation rates even as the economy has improved. Enrollees in the state’s Supplemental Nutrition Assistance Program (SNAP) have jumped from just over 63,400 in 2007 to more than 227,000 in March 2018 — a 259 percent increase.

Nevada’s annual $76 million spending on TANF has remained essentially unchanged over the last two decades, despite inflation, population growth and a major economic recession. Funding for the program consists of $44 million in a block grant from the federal government and about $27 million in state general funds.

Democratic Sen. Julia Ratti, who sits on the task force, said she was intrigued by the concept of removing asset limits, saying it could potentially come up as part of the committee’s recommendations to the next Legislature.

“I find it very frustrating when our policies seem well intended, but what we end up doing is shooting ourselves in the foot a little bit,” she said.