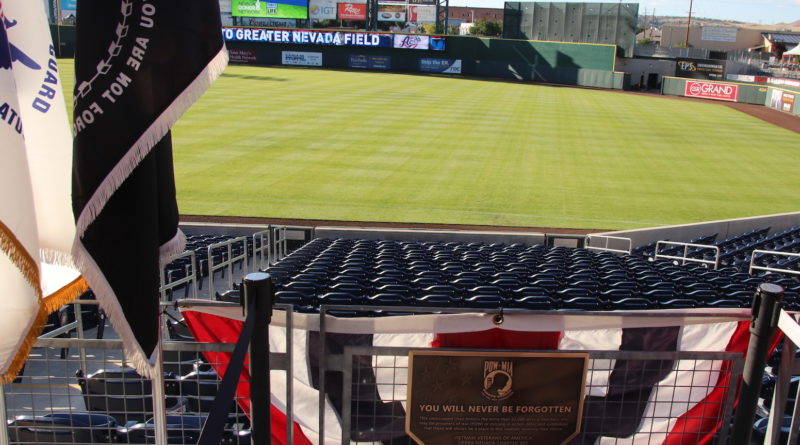 Vietnam veterans group, Aces dedicate chair in honor of those who sacrificed

RENO — After a short introduction and presentation, a tall figure standing next to a seat at the top of section 118 gently lifted a black cover revealing both a chair and special plaque at Greater Nevada Field dedicated to prisoners of war and those servicemen and women still missing in action.

For retired U.S. Air Force Lt. Col. William “Bill” Elander of Sparks, the ceremony recently conducted by the Vietnam Veterans of America Sierra Nevada Chapter 989 and the Reno Aces gave him an opportunity to reflect on his career as a military pilot and also as a POW during the last year of the Vietnam War in the early 1970s. His second deployment to Southeast Asia, after he spent almost three years as a pilot with the Thunderbirds Air Demonstration Squadron,  took him to the 469th Tactical Fighter Squadron at Korat Royal Thai Air Base, Thailand, in March 1972 where he flew combat missions over North Vietnam as a F-4E Phantom pilot.

“On my 65th mission, I was shot down and captured and released in 1973,” Elander said. “I spent some time at the Hanoi Hilton and another camp.”

The French-built prison known as Hoa Lo was ironically nicknamed the Hanoi Hilton, a slam on its inhospitable conditions. Both Elander and the late U.S. Sen. John McCain of Arizona, a former Navy pilot, were held at the prison at the same time, but they didn’t have any significant contact.

After four months of flying out of Thailand, Elander’s luck ran out on July 5, 1972. An air-to-air missile struck his Phantom, and the young officer bailed out in a mountainous area about 35 miles northeast of Hanoi. After six-and-half days of intense interrogations and constant threats, his captors moved him from isolation to a larger cell with 19 other POWs. Elander, who attended the pilot survival course at the former Stead Air Force Base northwest of Reno in 1958, stood strong during his captivity until late January 1973 when the North Vietnam and U.S. governments signed the Paris Peace Accord to end the war. On March 29, the North Vietnam released Elander and the other POWs during Operation Homecoming. Elander spent 267 days in captivity, devoid of any news from family or friends, an experience he still calls frustrating and difficult.

The day he returned home was special.

“I got home on April 3, my 20th wedding anniversary,” Elander said, tears welling in his eyes. “My last assignment was commander of an F-4 squadron in Utah (Hill AFB), and I retired there.”

Elander, who is a lifetime member of VVA 989, ended a career that spanned 20 years, two continents and a war.

J.R. Stafford, president of VVA 989, conducted the ceremony before Saturday’s Aces game against Omaha and then explained to the audience before the seventh-inning stretch the significance of the POW/MIA seat and plaque, which honors captured or missing U.S. military personnel.

The ceremony was a major part of the Aces’ annual Military Appreciation Night, which recognizes the veterans in Northern Nevada, and includes a military honor guard, veterans throwing out the first pitch and special individual recognition for members of the Nevada Air National Guard.

“POW/MIA seats are found across the nation, sports arenas, stadiums, townhalls, state capitols … they’re all different, but they are all very much alike,” Stafford said, adding the tribute is fitting for those who wore the uniform and served their country. “The sweetness of enduring peace is always tainted by the bitterness of personal sacrifice.”

Stafford said the special seat symbolizes the frailty of prisoners facing their oppressors and the hardships each POW encounters without loved ones and families.

“This chair will ever remind us of that life of each missing and of loved ones and close friends who keep the faith and wait for answers, answers considering their missing families, family member or friend,” Stafford explained.

“I thought Reno should have one,” said Swinger, who served in the U.S. Air Force for four years during the Vietnam War-era but in Thailand. “I sent Emily (Emily Jaenson, Aces general manager) an email, and with her husband being an ex-SEAL (naval special warfare), she was all for it.”

The first meeting occurred in May, and then several follow-up meetings confirmed the ceremony and sequence of events.

“There was a lot of give and take,” he pointed out. “I’m so glad to have it installed, and it’ll be here until they tear the stadium down.”

Jaenson, whose family has a long history of military involvement, was moved with the ceremony. She is the wife of Navy veteran who served on SEAL Team 8 based in Virginia Beach, Va., and then as an instructor at Naval Air Station Fallon. Her younger brother and grandfather also served in the Navy, one uncle enlisted in the Marine Corps and another uncle fought in Vietnam with the U.S. Army.

“It’s an absolute honor and privilege to be able to dedicate this seat,” said Jaenson, whose birthday also fell on the same day.

Jaenson said VVA 989 worked hard to coordinate the details and worked with her staff to make the unveiling of the POW/MIA seat a reality.

“I am overwhelmed,” she said.