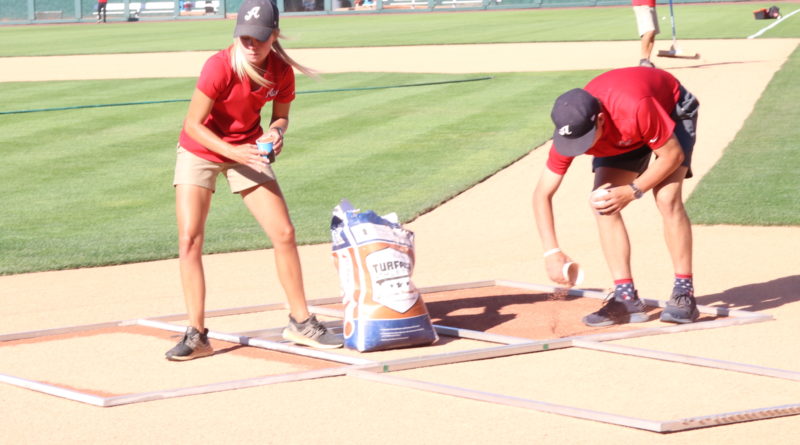 As a student at North Dakota State University in Fargo, Leah Withrow developed an affinity for diamonds … big diamonds that would not fit on one hand.

Because of her love for sports and the outdoors, Withrow found a way to combine the two. She became the only full-time female groundskeeper in the Pacific Coast League after the Reno Aces baseball team hired her in January as an assistant. In addition to helping maintain the pristine beauty of the outfield and specifically the infield, she is also part of the crew that meticulously prepares the soccer field for the Reno 1868 FC.

Withrow had a dream and now a mission to succeed in her chosen field … literally.

“When I was looking at colleges during my senior year of high school, North Dakota State was on my radar,” said the 2014 Douglas County High School graduate. “I have some family who live back there.”

Withrow perused college majors and one area stood out among the others: sport turf management.

“It was one of those majors that interested me,” Withrow said. “I like sports and the outdoors, so I talked to the department head.”

Living in Gardnerville near the base of the Sierra Nevada also served as a catalyst for her love of the outdoors. Even the cold North Dakota winter in her freshman year didn’t deter Withrow from her studies. In fact, she applied herself to her studies and wanted to learn more about turf management. Her first big break occurred when she landed an intern position with the Aces during the 2015 summer. Withrow said she wanted to gain experience, and the Aces were willing to give her an opportunity.

“I fell in love with it,” she recalled of being part of a baseball grounds crew. “I wanted to keep doing it.”

The following year she interned during the summer for the Milwaukee Brewers and returned to Reno for the 2017 summer. During the school year in Fargo, Withrow worked with the ground crew on the practice football field, both the practice and regular soccer fields and the baseball and softball fields. During the winter, she was part of basketball game operations.

When she graduated from NDSU last year, she had her degree and also three minors in weed science, business administration and horticulture. Her first job was at Northern Arizona University on Flagstaff, but Withrow knew it wasn’t the right fit. Then, her wish came true at the end of the year.

“I wanted to be more involved with athletics,” she recounted. “So, the boss I interned with called and said he had two open positions. He said it’s yours if I wanted it, so in January I came back.”

Joe Hill, director of Field Operations for the Aces, said he first met Withrow during the 2017 summer. He saw her potential and how she became part of the crew. When she left Reno to return to NDSU, Hill said he knew he would be able to hire her in the future.

“I had an opportunity to get her back, and she was my first phone call,” Hill said. “She’s fantastic and has been a great part of this crew, a great addition.”

During the season, Hill has seen her grow as an assistant groundskeeper. The baseball players from the Triple-A team know her on a first-name basis and respect her. Hill, though, is not surprised to see a full-time woman on the ground crew.

“Society and sports. Females are working themselves down to the field,” he said, adding the Aces also have a female general manager.

Aces President Eric Edelstein is very supportive of Withrow and what she brings to the ballclub.

“We wanted to put the best people into the best roles regardless of the stereotypes or historical reality,” he said. “We knew Leah, we knew her work ethic and knew her work ability. It was one of our easiest decisions we have made.”

As one of a handful of full-time women in grounds keeping at the Triple-A and Major League levels, Withrow acknowledges it’s a male-dominated profession. She said she only knows of full-time women groundskeepers in Baltimore and Detroit and considers them as trailblazers. As she gains more experience, Withrow said she hopes more women will enter the profession, and then she will be considered a trailblazer.

Once the Aces wrap up their home season at the end of August, Withrow will work on the Reno 1868 ground crew for the next two months, and during the winter, she will assist in the repair of equipment, prep the field for winter and order supplies for the 2020 season. There’s also the possibility of working a few days on the Diamondbacks’ ground crew during spring training.

In looking at the 2019 season, Withrow said the ground crew is like a tight-knit family with several brothers, a couple of weird uncles and protective fathers. She realizes her fellow groundskeepers are there for her. Edelstein said Withrow has earned the respect of both players and the groundskeepers, but he looks at the groundkeepers as a group of six fathers protecting her.

“She’s around pro athletes and a macho environment at times, but the older guys look after her,” he said.