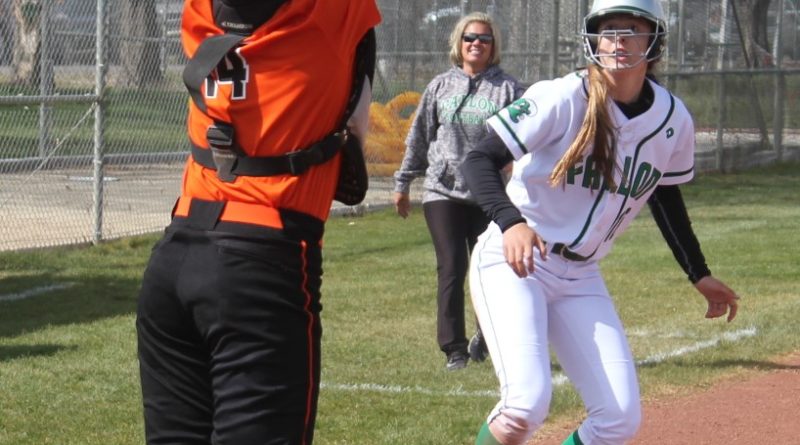 The Wave secured a six-run lead in the first inning. Fernley struggled to get on the bases, but held Fallon to one run in the second inning.

In the fifth inning Fallon’s Stacy Kalt hit a home run, making the score 8-0. Fernley made it on the board in the sixth inning with an in-the-park home run by Alexandra Conder; during the play, Fallon’s Alexis Jarrett collided with another player and there was concern over her condition, allowing the runner through — Jarrett was able to return to play though and caught the next ball that came her way.

“She toughed it out and stayed in the game after I made sure there wasn’t any harm or anything more serious,” said Fallon coach Tammie Shemenski.

The game ended in the bottom of the sixth inning with Jordan Byer hitting a three-run homer.

Fallon’s Faith Cornmesser was pitcher of record, playing the whole game and making nine strikeouts. Byers led the team at bat, scoring three runs and four RBI; Kalt and Caitlyn Welch were just behind her with two runs each.

Shemenski said she was happy with how the game went, adding Fernley is a team they always have to look out for. She said a one-sided victory one day could be a nail-biter the next.

The Fallon coach said she would have liked to see her players drive the ball more and have fewer pop-ups. Cornmesser also noted this was an issue and something that held them up in the middle of the game.

“We just have to keep working in practice,” Cornmesser said. “Make sure we don’t pop the ball up … if we keep working on that, that’ll be better in the next couple days of practice.”

The Vaqueros are playing this weekend in the Spring Jamborree hostd by Centennial High School at Majestic Park in Las Vegas. They were scheduled to play Green Valley at 10 a.m. Thursday, and will play a minimum of five games over the next three days.