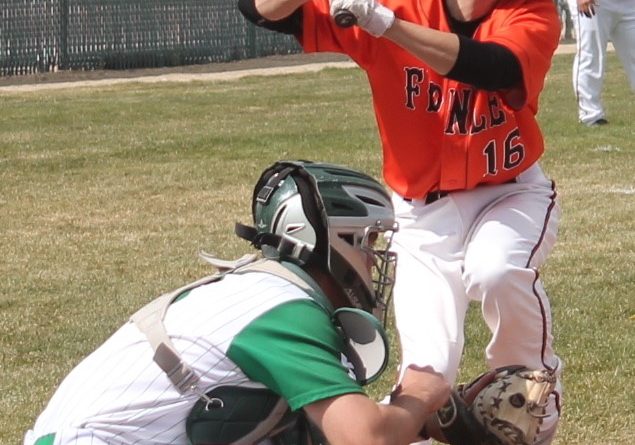 Two weeks after being one-hit by its cross-valley rival, the Greenwave baseball team exploded in the second meeting against Fernley.

After a week of no games, Fallon defeated Fernley, 11-1, on Tuesday at the Edward Arciniega Athletic Complex. Fallon improved to 6-4 in the 3A North hosts first—place Elko (10-3) this weekend for a three-game series.

The loss was Fernley’s seventh consecutive and the Vaqueros are now 4-7 in league play. They host Sparks for a 3-game series this weekend, with a single game Friday at 3 p.m. and a doubleheader Saturday at 11 a.m.

After being dominated by Fernley’s pitching earlier in the month, the Greenwave bats erupted this week.

“We hit the ball really well. We started the game out right,” Fallon coach Lester de Braga said. “We were finally getting back to the right approach at the plate.”

Facing six Fernley pitchers, including the same set that baffled Fallon in the first meeting, the Greenwave scored seven times in the first two innings before adding three in the fourth. The Greenwave ended the game with the mercy rule in the sixth inning with a run.

“It was just something we had to get back to work on,” de Braga said.

Jack Swisher led Fallon at the plate with three hits and two RBI while Edgar Alvarado and Alex Mendez each collected two hits. Mendez also drove in three, while Nate Pustovrh and Sean McCormick each had one hit. McCormick drove in one and Hayden Strasdin had three RBI.

Mendez, Alvarado and McCormick each tripled.

Mendez and Strasdin teamed up on the mound to shut down the Vaqueros. Mendez started and pitched 2.1 innings and struck out four before being lifted for Strasdin. De Braga said Mendez was on a 40-pitch count with the Elko series looming as Strasdin pitched 3.2 innings, allowing one run on two hits while striking out four.

Next up for Fallon is Elko, which has turned into one of the Greenwave’s biggest rivals.

Elko leads the league with a 10-3 record after sweeping a three-game series from Sparks last weekend. Elko has won all four of its series, taking two of three against Dayton, South Tahoe and Lowry. The Indians also knocked off Spring Creek in a single game last month. Elko holds the tiebreaker over Dayton, also 10-3 in league.