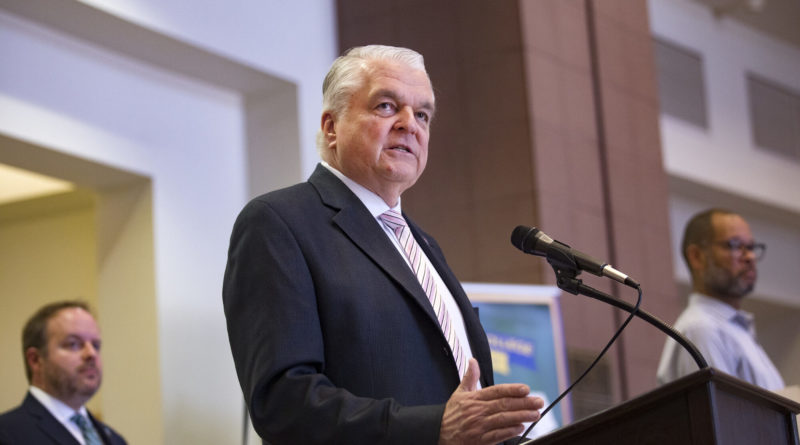 Nevada will move into Phase 2 of its reopening plan on Friday amid downward trends in COVID-19 positivity test rates and hospitalizations — a transition that will allow additional venues including churches, gyms and bars to reopen.

In prepared remarks published late Tuesday after a press conference was canceled and technical difficulties prevented the release of a pre-recorded video statement, Gov. Steve Sisolak said that the state is ready to move into a two-to-three week Phase 2 of business reopenings that will see a broader array of businesses open their doors, including certain sporting events, gyms, swimming pools and tattoo or piercing businesses that have been closed since initial closures were ordered in March.

“If there is a problem, we’re going to have to start pulling things back,” he said in a conference call with reporters. “But I don’t anticipate that to be the case. I’m confident that it’ll go well.”

In the prepared remarks, Sisolak touted a 31-day decline in the state’s COVID-19 test positivity rate, as well as decreases in the number of coronavirus-related hospitalizations and increases in testing.

“Nevadans have done an incredible job helping to flatten the curve, and I want to again thank you for understanding the severity of this health care crisis and for taking the necessary precautionary measures, like making a face covering a part of everyday wear,” he said. “It’s because of your response that I am able to relax some of the restrictions as we enter Phase 2.”

Sisolak was initially scheduled to deliver the news in a press conference early Tuesday evening, but abruptly cancelled after his office announced he may have been exposed to COVID-19 during a visit to a workplace last week. Instead, the governor’s office published the remarks late on Tuesday, with Sisolak taking questions from reporters during a hastily arranged press conference later in the night.

While businesses will be required to continue various social distancing and mitigation measures, including having employees wear face coverings and remain six feet apart, the new Phase 2 will increase the number of Nevadans allowed to participate in public or private gatherings from 10 individuals to 50.

Businesses allowed to open on Friday include:

Additionally, Sisolak announced that places of worship will be allowed to reopen their services to a maximum of 50 people attending an in-person service at a time, with strict social distancing measures in place. At least two federal lawsuits have been filed challenging the previous ban on in-person church or places of worship services. Sisolak said he “strongly” urges faith-based services to continue virtual services.

Asked what would happen if, for example, people broke the rules and congregated around a bartop, Sisolak said people have not been shy about reporting such violations.

“If that happens and we send an inspector out, we’re going to try to educate people. If education doesn’t work, they could potentially receive a citation or risk losing their business license,” he said. “And I don’t think it’s worth taking the chance of losing your business to let somebody go up there and order a beer.”

But the governor said that live performances or events with live performers would be allowed as long as the operator submitted a plan to an appropriate state authority — such as the Nevada Gaming Control Board or Nevada Athletic Commission.

Sisolak also said in his prepared remarks that state offices may resume some services to the public and that he was finalizing plans to reopen public offices. He also said that he was confident in a June 4 reopening date for the state’s casino industry, and that the Gaming Control Board would release industry-specific guidance for the official resumption of gaming activities.

Sisolak said those guidelines would be released on Wednesday. A travel advisory that calls on people coming into Nevada to self-quarantine for 14 days will also be revised before the anticipated June 4 reopening, according to Sisolak Chief of Staff Michelle White.

Sisolak said he envisioned casino employees educating patrons on the rules, but added that gaming regulators and their staff are the law enforcement arm and they have strategies on how to ensure people adhere to guidelines.

The governor’s office said they received word on Tuesday that the governor visited a workplace last week where an employee, who was not in the building at the time, has since tested positive for COVID-19. Sisolak said in his prepared remarks that he has not exhibited any symptoms of the virus and took a COVID-19 test on Tuesday. He said he expects to get the results on Wednesday and would share them with Nevadans when he gets them.

He declined to answer whether the workplace in question was the office of the Department of Employment, Training and Rehabilitation. He had tweeted last Thursday that he met with call center staff handling the state’s landslide of unemployment claims.

Sisolak previously announced a move into a Phase 1 gradual reopening on May 9, allowing most retail stores in the state to open with limited capacity and social distancing measures in place and still encouraging Nevadans to stay at home as much as possible. At his last press conference two weeks ago, Sisolak said initial signs were positive but wanted to see additional data before moving into a Phase 2.

While the percentage of positive tests is going down as the number of tests administered goes up, there is still a significant number of positives — something he acknowledged concerns him. Sisolak said he didn’t have a specific number of raw positives that would make him rethink reopening.

But he encouraged people to get tested if anyone they’ve come into contact with has tested positive, adding that the test takes less than 30 seconds and is painless.

“The only way we’re going to be able to stop the spread of the virus is everybody that potentially could be exposed, you remove yourself from that equation by isolating yourself by quarantining yourself and getting a test,” he said. “That’s what we’re going to have to do to drive these numbers down.”

Roadmap to Recovery Chart by Riley Snyder on Scribd

Roadmap to Recovery Chart by Riley Snyder on Scribd