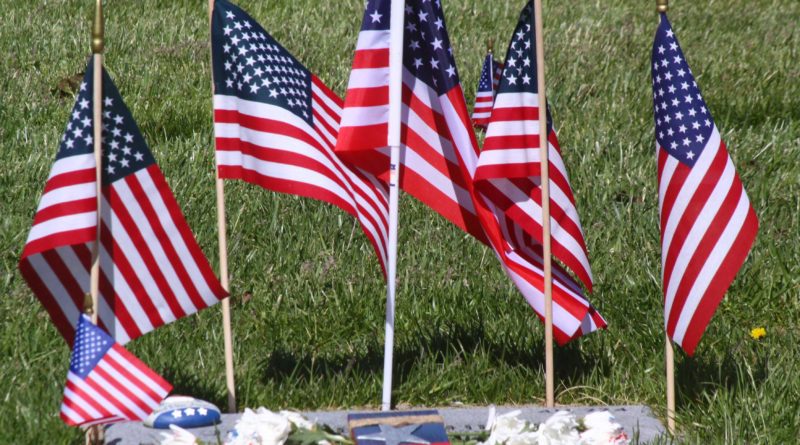 A short ceremony observing Memorial Day was conducted under 10 minutes without an audience at the Northern Nevada Veterans Memorial Cemetery in Fernley.

Gone were the thousands of people who attend the annual remembrance to pay their respects to loved ones, the ruck sack marchers delivering dog tags of every man and woman who died in the Global War on Terror and to honor servicemen and women who are interred at the state veterans’ cemetery. Some paid the ultimate price in service to their country while others died in later life.

Because of the governor’s guidelines in limiting the number of people gathering on state property, the traditional Memorial Day ceremony, as well as the flag placing event preceding it on Saturday, were canceled. Instead, Nevada Department of Veterans Services opted to have a short observance with a wreath laying.

“It was short but meaningful,” NVDS Director Kat Miller said of the remembrance, which, she stressed, was not a public event. “No coronavirus, no pandemic will stop us to honor our veterans.”

Miller said a similar ceremony was conducted at the Southern Nevada Veterans Memorial Cemetery with Gov. Steve Sisolak in attendance. Miller also said people and small groups came out to the cemetery and placed flags at each gravesite. Several groups bought and placed almost 5,000 flags.

“They came out and made sure our cemetery was decorated in the same spirit that we had since the Civil War when the first group decorated graves,” she said.

Tom Draughon, a member of the Nevada Veterans Coalition and master of ceremonies, said Memorial Day is to remember veterans at the NNVMC and who are buried at cemeteries around the world.

“This is our way of saying we really appreciate your service and what you’ve done for us,” Draughon said.

During the ceremony, a moment of silence was held, and Sharon Serenko offered a prayer for both the veterans and the uncertainty of the country because of the coronavirus. Veteran Service Commission Chairman Bill Baumann placed a remembrance wreath with NVC member Jerry Findley and Fernley Mayor Roy Edgington.

Draughon said he hoped the observance fulfilled the need for remembering fallen comrades — brothers and sisters — who gave so much to the country. Afterward, anWorld War II bi-plane, piloted by Ageless Aviation Dreams Foundation president Daryl Fisher circled the cemetery along with another plane.

Fisher also did a flyover at Fernley Estates.

Although the flag placing and Memorial Day ceremonies as they are normally held were canceled, the cemetery was open to the public throughout the Memorial Day weekend, and Draughon said there was a steady stream of visitors all three days.

“There will be people coming through here all day,” he said.

Many he said, brought their own flags to place on gravesites.

During and after the ceremony, a Navy veteran carrying a U.S. flag in his left hand moved from one gravesite to another, offering a salute and calling out each service member’s name. Richard Crombie of Reno has attended previous events at NNVMC, but he wanted to do something special because of this year’s restrictions.

“The idea was — I heard unmistakably — things were canceling and heard the official ceremonies were canceled,” said Crombie, who wore his uniform from when he served aboard the submarine USS Bremerton. “I wanted to come out and do something special.”

Crombie, who left the Navy in 1986, said he mapped out the cemetery and timed his movements. He visited each headstone and then paid his respects by saluting at every columbarium wall. Four years ago, Crombie said he walked around the McCarran loop in the Reno area.

“I took a step for every name on the Vietnam Wall,” he pointed out.  “I walked 28 miles, and dressed the same way. I’ve done it once … I can do it again.”

Spending the day at the cemetery also gave him meaningful time to spend with his son, his face placed on a medal hanging from Crombie’s neck. Crombie said he also visited the War on Terror monument at Reno’s Powning Veterans Memorial Park.

On June 7, 2006, his 20-year-old son Pvt. First Class David Nick Crombie died when an improvised explosive device blew up near the Humvee in which he was riding. David Crombie, who was born in Hawaii when his father was serving at Pearl Harbor, enlisted in the Army in December 2005, attended his basic training to become a combat medic, and shipped off the Germany. He was assigned to the 2nd Battalion, 6th Infantry Regiment, Baumholder, Germany. He arrived in Iraq near Ramadi in May of 2006, where he served less than 30 days.

Just the week before his death, the younger Crombie received credit for saving the life of an Iraqi soldier on one of his missions.

Robert Perea contributed to this story.