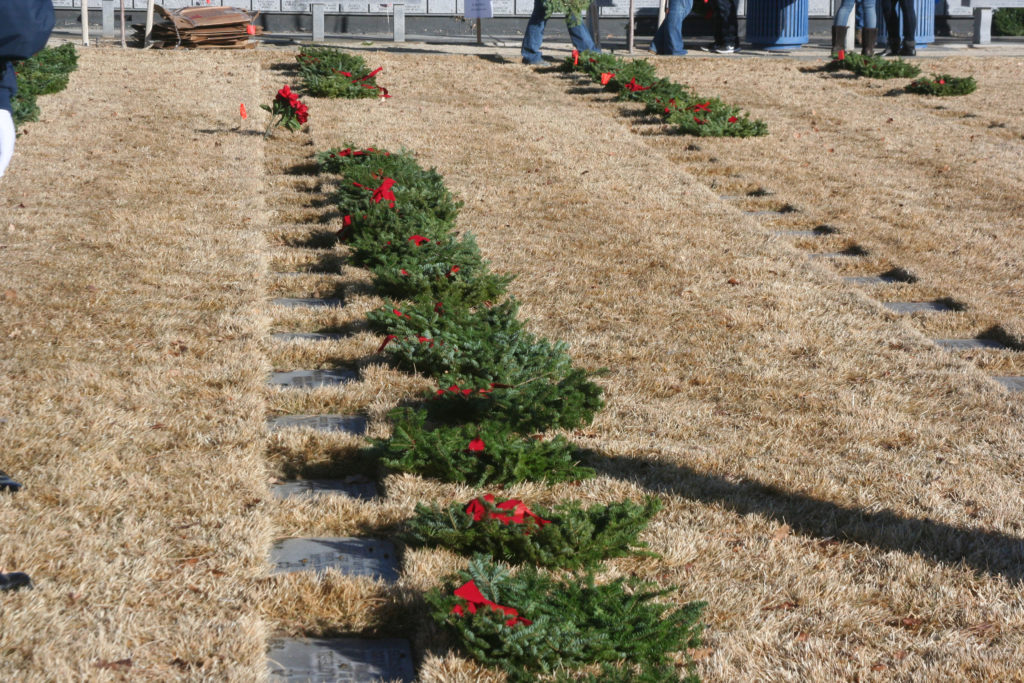 About 2,100 wreaths placed, remainder to be placed Monday

A crowd of about 1,350 turned out in the cold Saturday morning to place wreaths on the graves of veterans as part of the national Wreaths Across America.

Unfortunately, most of the wreaths were still several hundred miles away.

“This is not anything we had planned on, I can absolutely guarantee you,” Draughon told the crowd. “We are as heartbroken as you folks are.”

With 2,100 wreaths on hand, the coalition did have enough for everyone in attendance to place a wreath, and after a few brief opening remarks by Draughon, the placing of the wreaths began with family members being afforded the chance to go first and lay a wreath on a loved one’s grave.

Draughon said the rest of the wreaths would arrive Sunday afternoon, and the public is invited to come back to the cemetery and place wreaths at 9 a.m. Monday.

One of the people placing wreaths was Deborah McGifford of Dayton, who along with her fiancé Randy, placed a wreath on the grave of her husband, James McGifford, a Marine veteran who was killed in a motorcycle crash in 2014.

Deborah and Randy said they just returned from a vacation and thought they had missed the ceremony, until they saw a story about it on the news Friday night.

“I was so upset because I thought I missed it. My husband was very special, as his wife was,” Deborah McGifford said, gesturing to her fiancé. “I come here every year.”

Nicole and Justin Pilkington brought their daughter Presley from Livermore, Calif. to place a wreath on the grave of Nicole’s grandfather, Al Huss, a military policeman in the U.S. Army who fought in World War II.

“When we learned we were having her, we decided this was important,” Nicole Pilkington said. “It’s just a great way for her to remember her grandparents.”

Draughon opened his remarks with a request for a moment of silence, to remember the fallen, prisoners of war, missing in action and honor those who have served and are serving in the armed services.

“Lying here before us, and in cemeteries across this nation, are men and women who have given their lives so that we can live in freedom and without fear,” Draughon said. “Today we show a national front of national unity all across the United States of America as we remember the fallen and honor those who served and teach our children the value of freedom. The wreaths before you represent our commitment as a United States of America to remember the fallen.”

Draughon read part of a letter from Karen Worchester, Executive director Wreaths Across America apologizing for the delay in delivering the wreaths.

“We are extremely sorry for the disappointment and frustration this has caused the supporters and the local community,” Worchester wrote. “We feel the disappointment in Fernley, Nevada and the families of those being remembered.”

Also among the crowd that included many active duty servicemen and women and veterans were several members of the Battle Born Patriots chapter of the Sons of the American Revolution.

“We’re all volunteers, but we love the history of it and we love doing things like this that add to the community,” said Michael Fitzpatrick. “We do a lot of things that involve veterans, because that’s our heritage.”

“We love coming out here and doing our bit to recognize veterans and we consider it an honor,” said David Hess, president of the Battle Born Patriots chapter.