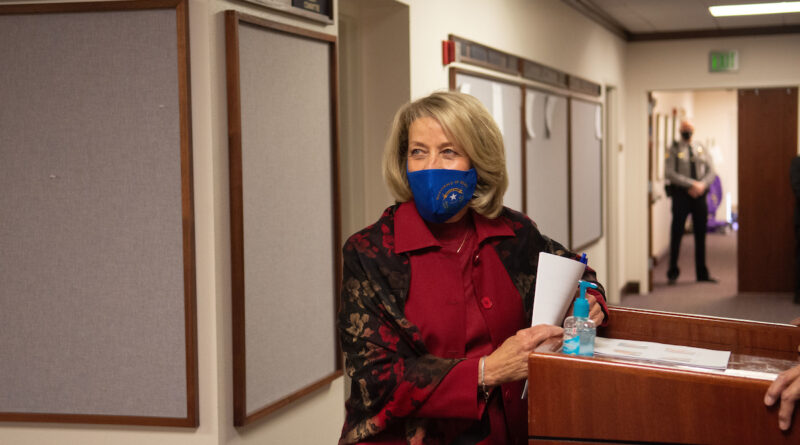 Secretary of State Barbara Cegavske said her office was not consulted about the fate of two tax petitions and ultimately did not agree with Attorney General Aaron Ford’s opinion — triggering a rare circumstance in which she wrote him a letter saying the petitions should remain on the 2022 ballot.

The situation involves gaming and sales tax initiatives put forward and qualified by the Clark County Education Association last year. But the union was expected to withdraw the petitions after a last-minute deal in the legislative session that pumped more money toward education through a mining tax increase.

Ford issued an opinion in late July green-lighting that plan, writing in an opinion that “the Nevada Constitution does not prevent the proponents of  an initiative petition from withdrawing the petition.”

That didn’t sit right with Cegavske, whose office is charged with overseeing elections.

“After many years in the Nevada legislature, I knew immediately that the actions of the LCB were outside of the scope of the NV Constitution,” she wrote in a statement to The Nevada Independent. “Our office was not contacted by anyone as to our interpretation of our duties. My staff and I reviewed the AGO opinion and decided it was not aligned with our position.”

to make sure you never miss a thing.Enter your email here…Sign Up

In turn, the secretary of state said her office decided to “deliver our own opinion to the office of the AG,” which it did in September.

The letter, which was first reported by the Las Vegas Review-Journal, contradicts Ford’s decision and says the petitions should remain on the ballot regardless of the mining tax deal, setting the stage for litigation.

“After the review, the Office has concluded that the Opinion fails to address the Constitutional imperative and compels the Secretary to act in a certain manner,” she wrote Ford. “Our Office maintains a different position than the Opinion with respect to the nature of the affirmative obligations imposed on the Secretary of State by the Nevada Constitution specifically with respect to initiative petitions that have been filed, verified, and submitted to the Legislature.”

In the letter, Cegavske pointed to the Constitution’s use of the word “shall” in a passage about petitions, arguing its inclusion “imposes a mandatory, not discretionary, obligation” to put the tax question to voters.

Ford declined to comment on the secretary of state’s letter rejecting his opinion. Cegavske also did not elaborate on her office’s legal opinion.

“We delivered our opinion this past September and have since had no comment on the particulars of our position,” she wrote in a statement.

Cegavske did not address whether she consulted outside counsel, but a spokesperson for her office said the secretary “has acquired numerous friends and confidants who were helpful in advising her.”

When the Clark County Education Association announced its pair of initiatives in January 2020, the union estimated they could bring in an extra $1 billion per year for the K-12 education system. One petition would raise the state’s gaming tax rate from 6.75 percent to 9.75 percent, while the other would boost the Local School Support Tax rate from 2.6 percent to 4.1 percent and bring the state’s baseline sales tax rate to 8.35 percent.