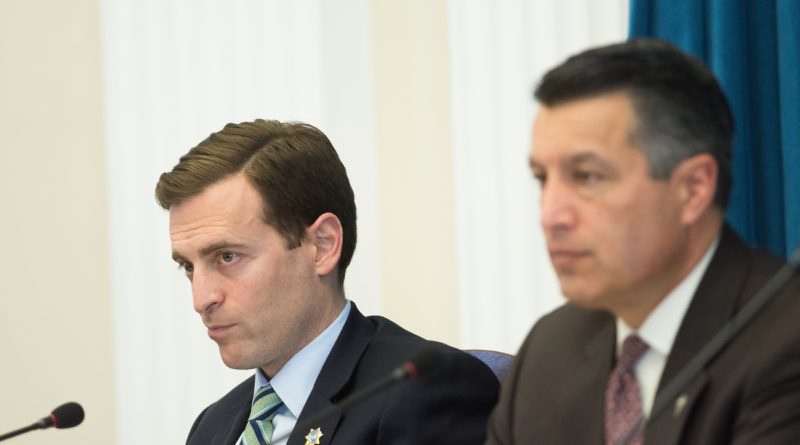 Sandoval said Monday that he hasn’t spoken with his fellow Republican on erasing the Commerce Tax, levied on businesses that gross more than $4 million annually. But he said eliminating it would erase a “generational investment” in Nevada children, and that anyone seeking to remove the revenue source needed to first identify which areas they would cut.

“Anyone supporting a repeal of the Commerce Tax must explain to Nevada’s children, families and businesses which education initiatives will be cut if it is eliminated,” he said in a statement. “Will they cut gifted and talented programs, end all-day kindergarten, eliminate special education resources, decrease literacy programs that help students read by third grade, cut autism funding, stop career and technical education, and get rid of technology in schools grants? Any discussion of eliminating this revenue source must include answers about where in the budget they will cut.”

The attorney general detailed the proposed repeal on the Issues page of a campaign website taken down in the wake of last week’s mass shooting that left 58 dead and nearly 500 wounded — a position he has held since 2015. His campaign yesterday delayed the official announcement and planned statewide tour until Nov. 1.

Following Republican wins up and down the ticket in 2014, Sandoval and legislative leaders proposed a $1.4 billion bevy of new and extended taxes during the 2015 legislative session designed to provide a significant boost to the state’s K-12 education system and broaden the tax base. Despite opposition from some business groups and hardline anti-tax Republicans, the tax package ultimately passed by the required two-thirds majority in both houses of the Legislature.

The tax is projected to bring in an estimated $381 million over Nevada’s two-year budget cycle, according to a May analysis by the state’s Economic Forum. Businesses can also soften the blow by applying their Commerce Tax liability as a credit against the state’s payroll tax.

Efforts to repeal the tax fizzled out in 2016 after the state’s Supreme Court threw out more than 20,000 signatures because of issues with summary language accompanying the initiative, which failed to adequately explain how a repeal would affect the state’s budget.

But backers of the tax repeal re-launched efforts to qualify a 2018 ballot question in August, and between Laxalt and state Treasurer Dan Schwartz — who announced his gubernatorial bid in September — two potential Republican successors to Sandoval seem unwilling to back one of his crowning achievements.

Senate Democratic Leader Aaron Ford, who is seeking Laxalt’s job, said in a statement his caucus will “fight tirelessly” against any effort to repeal the Commerce Tax, which he said would “threaten our progress and sabotage this desperately needed education funding.” He noted that the tax increase, spearheaded by Sandoval, passed with bipartisan support.

“Every Republican legislator and candidate should condemn this partisan attack on Nevada students and commit to opposing any effort to undo Governor Sandoval’s increase in education funding,” Ford said in a statement.

Republican Assembly Leader Jim Wheeler voted against the tax in 2015, and said he has always supported repealing the tax given that future Democratic lawmakers could either lower the threshold or raise the rates for individual industries. Wheeler, who said he thought Laxalt would make a “terrific” governor, said he didn’t foresee any cuts being made given how well the state’s economy has been doing over the last five years.

“I don’t think that there will actually be cuts in overall revenue,” he said. “I think we’ll actually go up, with the way this state is going right now. You can’t even find a house in Reno, there’s so many new jobs.”

Republican Senate Leader Michael Roberson, who has closely aligned himself with Laxalt amid his own announced run for lieutenant governor, didn’t respond to requests for comment on Laxalt’s plan to repeal the tax. But the Republican spent much of his political capital in shepherding the tax through the 2015 session, and has continued to defend his decision to vote for it as recently as August 2017.

“This is the culmination of a great deal of hard work by many, many people in this building,” Roberson said in a vote shortly before the Senate voted to concur on the final version of the legislation. “I want to thank the governor for his tremendous historic leadership on this issue.”

Assembly Speaker Jason Frierson, a Democrat, said that businesses in Nevada are looking for a stable tax climate and that repealing the tax would undo that certainty.

“I would see a repeal of that measure as a significant hit to what is already an underfunded public education system by a significant amount, hundreds of millions of dollars,” he said. “But I also think that symbolically, to repeal one of the few instances not only in Nevada but in the country in recent years where there was a bipartisan effort to do the right thing, seems to me to be putting politics and rhetoric over children and teachers.”

Schwartz, who’s served as state treasurer since 2015, said he thought renewed efforts to put the tax on the ballot was a “waste of time,” but agreed with removing it. He proposed using the $750 million in hotel room taxes approved by state lawmakers to fund construction of a domed stadium to house the Oakland Raiders to meet the budget deficit.

“I agree with Ron (Knecht) and Bob (Beers): Let’s repeal the Commerce Tax but let’s do it fiscally,” he said in an earlier interview. “There’s a hole in the budget, let’s take money from another source — which is the stadium — use that to plug the hole, and then I want to use some of that money for ESAs, and the rest we can use for higher teacher salaries.”

The Nevada Resort Association, whose members include the largest casino companies in the state, lobbied strongly in favor of the broad-based Commerce Tax, since it requires all businesses to chip in instead of relying on casino companies as a narrow tax base. The association’s president, Virginia Valentine, did not respond to multiple requests for comment on Monday.

Legal efforts to keep the tax in place have primarily been funded by the gaming industry. The Coalition for Nevada’s Future PAC, which successfully challenged a ballot question seeking to repeal the tax and kept it off the ballot, was primarily bankrolled by a number of high-profile casinos, including separate $38,000 donations from Wynn Resorts, Caesars Entertainment and MGM Resorts.

The potential repeal doesn’t sit well with Educate Nevada Now, which has been fighting for an overhaul of the state’s education funding formula. Sylvia Lazos, the nonpartisan organization’s policy director, said the plan is “shortsighted” and could further hinder efforts to bolster Nevada’s public-education system.

“We are against it just because there is not enough money for education right now,” she said. “In fact, our money is so low that it creates the situations we’re seeing in Clark County.”

The Clark County School District is grappling with an estimated $60 million deficit that its leaders have blamed on a combination of chronic underfunding from the state and rising employee costs. Lazos said the tax repeal could jeopardize a number of the governor’s education reforms, such as the Read by Grade 3 initiative and  Zoom schools, which receive extra money to help students who are learning English.

“It would be disastrous,” she said. “At the end of the day, we can’t keep talented teachers right now with the current (funding) formula.”

Nevada Trucking Association CEO Paul Enos testified against several iterations of the tax during the 2015 legislative session, but said Monday that the final version of the bill didn’t have a major effect on the trucking industry because it only captured relatively rare cases of intrastate trucking, and that repealing the tax wasn’t a “top priority.”

Representatives for several casino companies did not respond to requests for comment about a potential repeal.

Las Vegas Sands spokesman Ron Reese said in an email the casino company has yet to conduct a review of the impact that repealing the Commerce Tax would have on the company specifically and the gaming industry generally. Reese did not respond to a request for further comment about whether the company is concerned about a possible rollback of the tax, which the gaming industry as a whole advocated for.

Sands and its billionaire CEO Sheldon Adelson are generally viewed as Laxalt allies. Both Sands and Adelson are major Laxalt donors, Laxalt’s top campaign consultant lobbies for the casino company and Laxalt urged the head of the Gaming Control Board to intercede in a lawsuit on behalf of Adelson, a move some viewed as politically motivated.

Officials from the Las Vegas Metro Chamber of Commerce — which grudgingly endorsed the 2015 tax increases —  and the Nevada Taxpayers Association — which was neutral on the tax but opposed a ballot measure repealing it — did not return requests for comment.