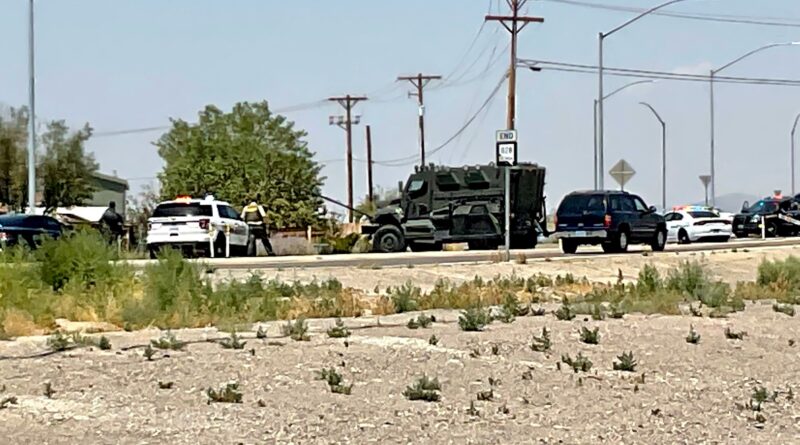 A man armed with a handgun and wanted on felony warrants out of California and Arizona was arrested Monday afternoon following a standoff after he barricaded himself in a vacant home in the Villa Mobile Home Park in Fernley.

Isaiah Caban, a 38-year-old Las Vegas resident, was arrested by the Nevada Highway Patrol following the standoff, after he led NHP troopers and Lyon County Sheriff’s Office deputies on a high-speed chase from Fallon to Fernley.

The chase began in Fallon, when at approximately 6:30 a.m., Nevada Highway Patrol Troopers attempted to stop a silver 2019 Kia Sorento traveling 84 miles per hour in a 55-MPH zone on US-95 near Churchill County mile marker 23. The vehicle matched the description from an armed robbery that occurred at 5:45 a.m. at the Sinclair gas station in Hawthorne and had been confirmed as stolen in a carjacking in Las Vegas on Sunday.

The driver of the Kia didn’t stop when the troopers in Fallon attempted to pull him over. Instead, he drove through side streets in Fallon, reaching speeds of 129 MPH, and continued westbound on U.S. 50A westbound toward Fernley.

NHP requested assistance from the LCSO as the pursuit headed toward Fernley. Deputies tried to stop the car with spike strips on U.S. 50 near the Fox Peak RV Park, but the suspect saw the deputy placing the strips on the highway and veered into the eastbound lanes. He was still traveling on the wrong side of U.S. 50A when he reached the Fernley roundabout. He tried to enter the roundabout going the wrong way, but lost control of the vehicle and the car came to rest on the west side of Farm District Road at the roundabout. The driver left the vehicle and fled from law enforcement on foot into a neighborhood off Parkland Way. A home surveillance video showed the suspect fleeing into the Villa Mobile Home Park.

Lyon County’s SWAT team responded to the scene, and, divided into teams, did a street by street sweep of the neighborhood, where they found he had forced entry into a vacant home that is for sale. During the standoff, the Sparks Police SWAT team was requested for assistance, and when they arrived, because of the heat and other circumstances, they relieved several Lyon County SWAT team members.

Villa Park was placed on a code red lockdown, while the roundabout and portions of Main St. and Farm District Road were closed.

LCSO Lt. Ryan Powell said officers tentatively identified the suspect as Caban from items found in the car he abandoned, and Caban later confirmed his identity when he was reached via cell phone by a crisis negotiator. Before stopping communication with SWAT officers, Caban refused to come out of the house, but requested a Dr. Pepper. After Caban refused to leave the house, SWAT made the decision to breach the house. A SWAT vehicle knocked down the fence behind the house, and officers threw tear gas cannisters into the house. 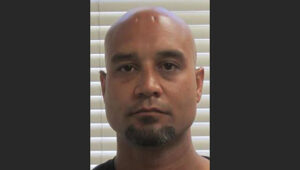 Caban then came out, and although he laid his gun on the ground, he refused officers’ commands to step a safe distance away from the gun, so a police dog was sent to subdue him and Caban was placed under arrest after suffering a minor dog bite.

Caban was taken to an ambulance to be decontaminated from the tear gas and then taken to a hospital to be evaluated, before he was transported to the Churchill County Jail in Fallon.

At the time of the incident, Caban was wanted on felony warrants from California for kidnapping and Arizona for armed robbery with a deadly weapon. He was arrested on a list of charges including being a felon in possession of a firearm, possession of a stolen vehicle, eluding an officer, reckless driving, passing on the right, driving left of center, failure to stop at the scene of a crash involving property damage, driving with a revoked license, possession of paraphernalia and the charges on the warrants.