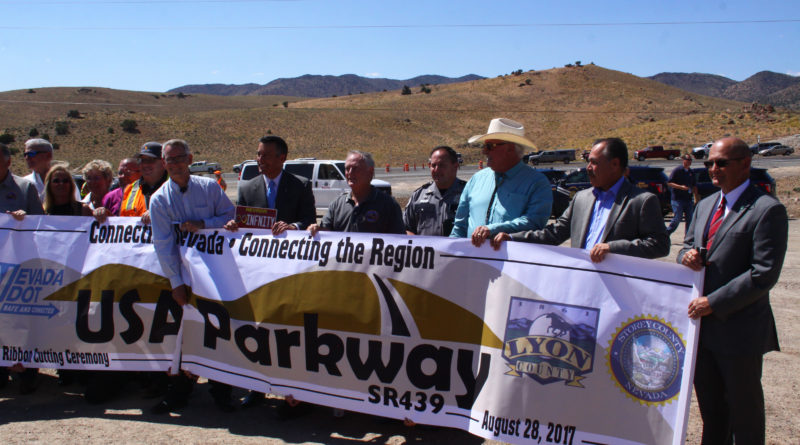 Hanging on a wall in his office, Lance Gilman has a proclamation that was approved unanimously by the state legislature in 2001 acknowledging USA Parkway as the key infrastructure necessary for the orderly development and prosperity of Northern Nevada.

Nearly 20 years after it was first conceived, construction of USA Parkway is nearly complete, and a host of state, local and business officials gathered Monday for a ceremonial ribbon cutting to commemorate the opening of the highway that will connect Interstate 80 with U.S. 50.

To signify the cutting of the ribbon, three electric Tesla cars drove through a banner with a USA Parkway logo, as Gov. Brian Sandoval waved a green flag.

The road will open for traffic next week, Nevada Department of Transportation Director Rudy Malfabon said.

The extension of the USA Parkway, which will be State Route 439, began in June, 2016 to connect the road from the Lyon/Storey county line at the Tahoe Reno Industrial Park to U.S. 50 in Silver Springs. Sandoval said the extension is being completed three months early, and on budget.

Sandoval bestowed the USA Parkway with the honorary name Infinity Highway, and hailed it as a gamechanger that significantly improves the movement of goods, services and people.

“This is a significant milestone in the diversity of the economy of what I call the new Nevada,” Sandoval said. “Today is another notch in turning vision to reality.”

Gilman, principal and director of the Tahoe Reno Industrial Center, said USA Parkway was the brainchild of his partner in TRIC, Roger Norman, that began in 1998, when Walmart announced plans to become the first company to build a distribution center at TRIC.

“When Walmart decided to come out here, there were no roads, no infrastructure, no bridge, no highway,” Gilman said.

When Walmart was considering purchasing land at TRIC, Gilman said, Norman pledged to build the freeway interchange and all of USA Parkway to the entrance of the Walmart plant, and that he’d have it done before Walmart had even gotten their certificate of occupancy for the building.

“And then the man wrote checks, you guys,” Gilman said. “He wrote checks for over $30 million for the interchange, private money. He built USA Parkway, private money. He did everything he said he would do for Walmart, which really was the kickoff to all of these wonderful things that we’re having right now.”

In the succeeding 18 years, more than 150 companies have either bought or are in the process of buying land at the TRIC.

“Roger Norman had the fortitude and commitment to put his life on the line, his financial life, I’m going to tell you, factually, on the line and build and make this thing happen,” Gilman said.

Gilman also marveled that NDOT and design/build contractor Ames Construction was able to complete the 12-mile project in 14 months.

“Here is NDOT having delivered a 4-lane highway all the way to Highway 50, in 14 months,” he said. “I’m not sure you get plans out of an organization in 14 months anymore today.”

Sandoval lauded the impact on the highway for Lyon County, which he said was the hardest hit county by the recession in the mid 2000s, with the highest unemployment rate in the state.

“Now the people that live in Silver Springs, Stagecoach, Carson City and Yerington will have access, and quick access, to quality jobs,” Sandoval said. “They will be able to be home for dinner and go to their kids’ athletic events.”

Lyon County Commission Chairman Bob Hastings said that makes the highway more than just a connector from U.S. 50 to Interstate 80.

“It’s going to give us an opportunity to lift ourselves up and grow,” he said.

Construction on the 12-mile project took more than 200,000 man hours, and was completed with no injuries, said Ames Construction Deputy Project Director Tim O’Dell. It included the excavation of two million cubic yards of earth, 500,000 tons of aggregate base, and 566,000 square yards of asphalt.