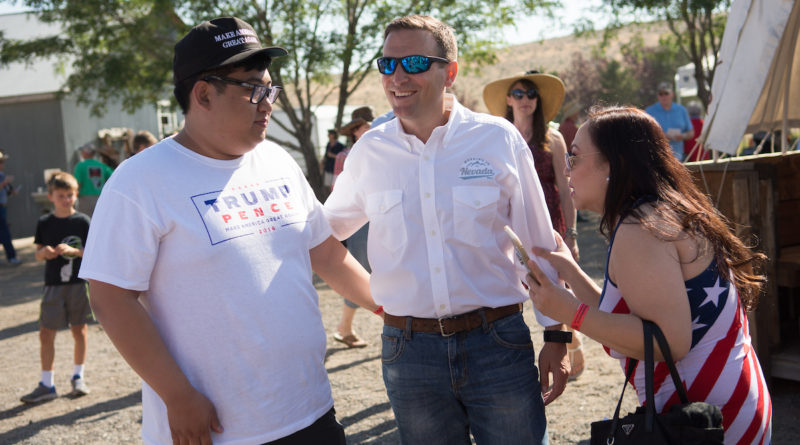 By Michelle Rindels and Luz Gray

Republican Attorney General Adam Laxalt didn’t make any big announcements at his record-setting 3rd Annual Basque Fry fundraiser, but you might not know it from how much the featured speakers at his barbecue gushed about his bright future.

A slate of political figures taking the stage at the Corley Ranch in Gardnerville hinted at the worst-kept secret in Nevada politics — that the 38-year-old Laxalt plans to jump in the governor’s race — and some spoke as if the deed was already done.

“I just want to tell you how much courage it takes to run for governor — Adam Laxalt and that beautiful family he has to step out into the public arena and run,” said Matt Schlapp, chairman of the American Conservative Union, which organizes the Conservative Political Action Committee (CPAC) conference. “It takes wonderful men and women to take this country back.”

But Laxalt did not pull the trigger in front of the 3,000 attendees at the event, which became something of an anticlimactic affair when Vice President Mike Pence and Texas Sen. Ted Cruz canceled their headliner appearances on account of Hurricane Harvey. Pinch hitting for Pence was Republican House Majority Leader Kevin McCarthy.

“I got a phone call yesterday and less than 24 hours, I’m here,” said McCarthy, a congressman from Bakersfield, California who Laxalt introduced as someone who’s “lockstep” with President Donald Trump. “You know why I come? Adam is an amazing individual. To find somebody of his caliber to be able to serve in today’s climate — he does an amazing job as attorney general but I said I would only come with the hope that maybe one day you’d run for governor.”

Laxalt’s Basque Fry is modeled after one his grandfather, Republican former Nevada governor and U.S. Sen. Paul Laxalt, held in Washington D.C. and in Nevada for decades. Nodding to Pence’s last-minute cancellation, Laxalt noted that his grandfather’s close friend Ronald Reagan once excused himself from the 1986 barbecue because the U.S. military was to bomb Libyan leader Muammar Gaddafi.

presidential candidates — and a celebration of the Laxalt family’s Basque sheepherder roots. The culinary star of the show is the lamb fries, or fried sheep testicles, that are the subject of dares and jokes.

“Aren’t you happy that after the last eight years, our fries aren’t on the menu anymore?” Schlapp quipped about Republicans taking control of both Congress and the presidency.

Not all were so keen on Laxalt and Republicans. Progressive activists

Bob Fulkerson and Autumn Zemke crashed the event by blowing a Navy rescue whistle until they were escorted out. They later explained in a statement that “we’re blowing the SOS whistle for a country and communities under severe distress.”

About a mile away, a group of some 50 protesters gathered on a street corner in front of a giant inflatable chicken with a Trump-like hairdo. They chanted and waved signs to passing traffic, and several brought up a long-standing beef they’ve had with Laxalt because he signed Nevada onto a legal challenge of an expanded Deferred Action for Childhood Arrivals (DACA) program.

“I’m here because I want to make sure that Adam Laxalt knows that we do not stand with him and the Nevadans in the state don’t stand with his hatred and his negative rhetoric against immigrants,” said Dulce Valencia of the Progressive Leadership Alliance of Nevada.

Another protester who gave his name as Paul said he was upset by the event’s Basque theme.

But inside the event, speakers praised Laxalt, who made it a priority in his first term to fight what he described as the Obama Administration’s federal overreach. He’s been supportive of Trump and has defended Republican priorities such as the voucher-style Education Savings Account program.

“My vision for Adam is high as the sky can go, as I’m sure it is for you,” said Republican New Mexico Gov. Susana Martinez. “Thank you, Adam, for being the amazing attorney general you are.”

Nevada Senate Republican Leader Michael Roberson, who announced on Monday that he was running for lieutenant governor, stressed the importance of Republican control of state government. He described the 2017 legislative session as “the most pro-felon, anti-business legislative session in the history of this state” and said he fully supports a trio of recall attempts targeting senators in the Democratic caucus: “If successful, Republicans will be back in control of the state Senate by Christmas.”

He declined to directly answer a reporter’s question about how he might be involved in the recalls.

“2018 is a huge year for all of us, for all of Nevada. We have to make sure we have a Republican Senate, we need to make sure [Assemblyman] Jim Wheeler has a Republican Assembly, we have to elect a conservative governor in 2018,” Roberson said in a speech. “And I will be standing side by side with you trying to make sure that person is Adam Laxalt.”

Laxalt didn’t talk much about his gubernatorial prospects from the stage, but did praise the leadership of Trump-aligned McCarthy and called for Republicans to unite behind that vision.

“The majority leader showed we have great leadership back there that are willing to be conservative, and consistent, and help drive us in the direction we need to go,” Laxalt said. “Thankfully we have enough, still, in our party to move us in the right direction. Let’s all try to row together like the leader said, and let’s get going for 2018.”