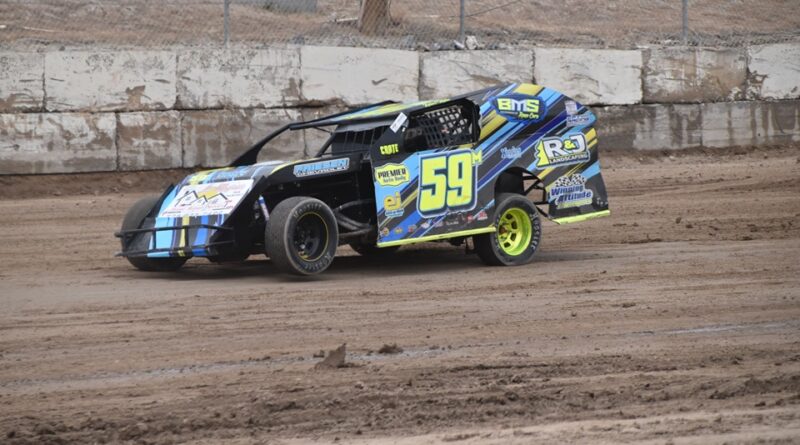 After a two-month lay off to refurbish seating in the grandstands, the oval at 95A Motor Sports Complex was in action again. In addition to the regular classes a new one, the Bootlegger, was added, which is a push to pass division that runs on a soaked track.

After the dust settled IMCA Modified winner Robert Miller said, “The race was all right, we did some changes from the heat race. We changed gears and everything worked out  Then just got out there and after about three laps figured out what line you needed to straddle those ruts.

“You’re trying to position yourself when you get in there. If you hit them the wrong way and it shoots you out there like a pinball machine. I would like to thank Winning Attitude, Lyle Hopper, Steve Caccamise, and thank Royce Goetz for driving the 10n as we won the Hobby Stock as well, Want to thank him for giving me the ride in that tonight. It’s a good night.”

There were going to be 14 cars in the main but due to the late hour and the fact some drivers were heading for Susanville, several chose to load up and head out before the race began.

When the green waved, Robert Miller and James Thedodeaux led the charge. Then Miller took the point, only to have Mark Skender get past both of them to take the lead.

All three ran close, but Turn 4 and the ruts were a bit of a problem. Many times the leader would hit one and have their car slowed, then another would take the point.

Late in the race, the leaders encountered lap traffic, where Miller was able to get around them. Thedodeaux was blocked. Then Fred White grabbed second.

A late caution with five to go bunched everyone up. On the green Miller took off and stormed to the victory followed by White, Thebodeaux and Skender, who had slipped to fourth.

There were only three B Mods on hand, but Rusty McMillan was unable to start the main. Out on the track Jimmy Ray Huffman and Craig Nieman put on a place-swapping race.

In the end, Nieman won the day with Huffman coming in second.

When the Hobby Stock main began 13 cars stormed into the first turn but debris in Turn 2 caused a full restart. On the second try J.T. Stark and Jimmy Berhorst ran side-by -side for a while.

Behind the leaders, Robert Miller, in the car usually driven by Royce Goetz, was on the move. Eventually Miller used an inside move in Turn 4 to take the lead.

After that, Miller was pretty much in cruise control as he sped off to take the victory. Behind him Randy Boyd finished second, followed by Shane Cazel and fourth place Rick Miller.

When the Dwarf Cars took the green flag, Roy Petersen was on point with Dillon Kintz giving chase. Behind them Joe Frock was winding up his car and started headed toward the front.

Within a couple of laps, Frock got past Petersen and took the point. Then a caution slowed things as Race Wilson’s car stopped on the back stretch.

Once things got going again, Frock took off with Petersen leading the charge that was chasing him. The next caution came after Petersen’s car may have suffered right front suspension damage that almost put him into the wall or he slowed enough it just touched the wall.

Once that was cleared, the green waved again and Frock headed for another victory. When the checkered waved, Glen Sciaranni was second head of Donald Peterson and Isaac Giel.

However, two of them didn’t show up for post race tech and were disqualified. That elevated Donald Petersen to second followed by Larry Bell and Roy Petersen.

It took a pair of attempts before the Mini Stock/Gen-X main began. At first Missy Natenstedt was on point only to be replaced by Jordan Riley.

As the race progressed, Natenstedt and Riley lapped all the cards but Glenn Lee. It appeared that Riley would win the race as Natenstedt just could not catch him.

Then lady luck dealt her card and Riley’s car may have blown its engine. Either way it came to a complete stop exiting Turn 4.

One racing resumed, Natenstedt took off and claimed the victory while Lee ended up second. Riley was credited with third ahead of fourth place Clayton Holloway.

The new Bootegger division is a push-to-pass class, so contact is okay. Before their heat races and main, the track is watered so it will be slick and keep the speeds down.

It was quite late when their main began, but in the end Jeff Tuttle won, followed by Stuart Satathite and Jay Bradley.

Next race scheduled at the track will have a 6 p.m. start time and be on Saturday, August 29.