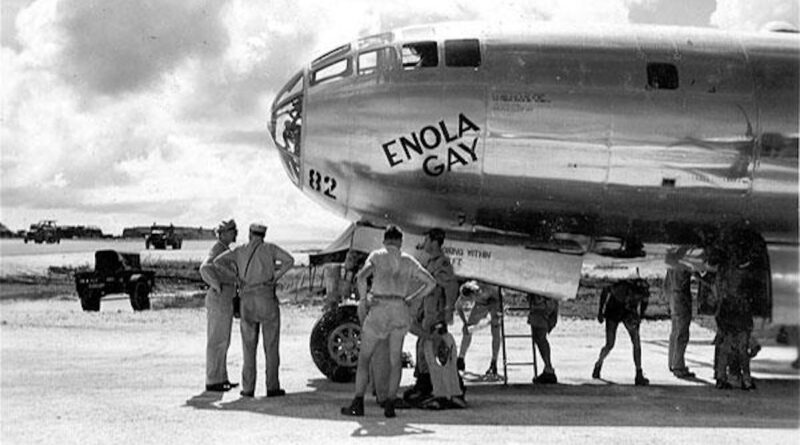 From dropping the first atomic bomb on Japan 75 years ago on Aug. 6, 1945, to the emperor’s surrender the following week on Aug. 14, fighting in the Pacific came to a grinding halt except for some pockets of resistance, mostly on the smaller islands dotted across the western part of the ocean. Much of the success of the two war-ending bombing missions on Hiroshima and Nagasaki resulted from top-secret training accomplished at the Wendover (Utah) Air Field during a six-month span beginning in December 1944.

Col. Paul Tibbets and Maj. Charles Sweeney, each born to middle-class families, had been hailed as hometown heroes during the war. After World War II’s climatic yet quick-ending outcome, both pilots and their crews emerged as America’s newest heroes for bringing the Japanese government to its knees.

The official Instrument of Surrender, though, wasn’t signed between the United States and Japan until Sept. 2.

Before Japan bombed Pearl Harbor on Dec. 7, 1941, the small railroad town of Wendover on the Western Pacific line became a sub post of Fort Douglas, an Army post overlooking Salt Lake City, to supplement the bombing training, said Landon Wilkey, curator of the Historic Wendover Airfield, 120 miles west of the Utah capital along the Utah-Nevada border. Several years before the surprise attack on Oahu, the U.S. government believed war against Japan was becoming more imminent.

In March 1942, Wilkey said Wendover became an independent air base from Fort Douglas where the B-17 and B-24 bomber groups trained. During 1943, the base saw its busiest construction and training year with 13 bombardment groups practicing on the Wendover range. Wilkey said 19 of 21 bomber groups shipped off to Europe.

The Department of War looked at the Wendover Air Field as an ideal training base for B-17 and B-24 training because of the thousands of uninhabited square miles spreading over the Bonneville Salt Flats and the isolation of being miles from a population center such as Salt Lake City to the east of Elko, Nev., to the west. The number of ideal weather days provided unlimited flying time although the flats still received its share of snow in late fall and the winter.

The men also encountered below-zero temperatures that had the mother-nature force of breaking pipes and causing bone-chilling misery for them. Late spring and summer, on the other hand, normally produced hot air sweeping over the flats toward the Wasatch Range like a desert furnace and highs frequently hovering near the century mark. Late afternoon thunderstorms periodically shut down flight operations.

Although the base first became known for training the smaller bombers groups, Wendover gained notoriety during the last year of the war for its top-secret mission involving a B-29 Superfortress composite group. Wilkey said the air group for the bombers consisted of pilots, navigators, gunner, bombardiers, ground crews, electronics, fuel handlers, administrative (meteorologists and dispatchers), medics, supply and firefighters. First, each specialized group of men attended their respective training schools before converging at Wendover to form a team.

Wilkey’s in-depth knowledge of the air field shows a love for the historical value of the Wendover Air Field, and it importance to the war effort.

Two years prior to the 509th’s arrival, the Manhattan Project began to develop an weapon that had the potential to end the war. President Franklin Roosevelt, his War Department advisers and his generals selected the four-engine B-29 Superfortress to be the delivery system and Wendover to become the temporary home for the 509th Composite Group.

Tibbets previously served as the deputy group commander of the Eighth Air Force in England where heavy bombers such as the B-17s would ascend to the European continent for daytime bombing raids over Germany. Once he left Europe, Tibbets assisted with the development of the B-29 and later became commander of the 509th.

The 509th Composite Group assigned to Wendover consisted of 1,767 personnel, 15 B-29s, five C-54s, and the First Technical Detachment that included both civilian and military scientists. Wilkey, though, said the reduced number of military personnel at Wendover made operational security easier to control. In addition to the composite group, which had been designated to drop nuclear bombs over two Japanese cities, 400 FBI agents also arrived at the air field to ensure the training stayed secret.

“Any time a crewmember left, he was tailed by agents,” Wilkey pointed out.

Wilkey said FBI agents assumed different undercover roles at Wendover such as cooks, clerks or civilian maintenance workers. The project was so secret, said Wilkey, the government didn’t want to take a chance on any secrets from the specialized training being leaked, intentional or not.

Project Alberta, which was part of the scientific Manhattan Project being conducted at Los Alamos, N.M., required crews to fly missions around the clock and become proficient dropping prototype bombs over the Great Basin desert. Sweeney was an instructor in Project Alberta housed in building 211 at Wendover, and in January, Tibbets selected him as commander of the 320th Troop Carrier Squadron. Four months later Sweeney took command of the 393d Bombardment Squadron, the first unit trained solely for nuclear warfare.

“First and foremost, the flying training missions were both different,” Wilkey said, delineating between the lighter bombers and the B-29s. “In the 509th, the planes were flying higher than the other groups at 31,000 feet. They worked with accuracy.”

Tibbets had a mission with the 509th: either end or shorten the war.

In between the training at Wendover, Wilkey said the B-29 crews left for Cuba in January 1945 as part of the 393rd Bombardment Group to perform their long, overseas navigation flights for their future mission over the Pacific Ocean from Tinian to the Japanese mainland. The B-29s, according to the airfield’s history, “flew simulated combat, high attitude, over water radar bombing and navigation missions.” Furthermore, the B-29 had a longer range than the B-17. Perhaps the Army Air Force didn’t recognize it in the 1940s, but Wilke said Wendover provided a perfect location for the intense training every crew completed.

“This is a hidden gem of World War II sites,” he pointed out. “The previous bomb groups found it as a great place, and it was great place for the planes to land and take off.”

Until the 509th began its training, Wilkey said life at Wendover wasn’t all work and no play. He said the men made travel arrangements to head to Salt Lake City for the weekend or find a way to visit Wells, a 60-mile trip west over one significant mountain range. Wilkey said the lure of casinos and brothels attracted the single soldiers and aviators to the little town at the foot of the Ruby Mountains.

Once the 509th returned from Cuba, training ramped up over the Utah desert with new B-29s “suped up” for the new mission. Each plane’s engines were lighter with fuel injection, and mechanics added a pneumatic bomb door and a modified tunnel to hold the atomic bomb. Tibbets and his crew flew in Enola Gay, named after his mother, and Sweeney’s crew trained in Bockscar, the second B-29 that dropped an atomic bomb on Nagasaki on Aug. 9. Every day until they left Wendover, each B-29 crew used the desert to find their targets by dropping a bomb, bank their aircraft and then leave the designated bombing area immediately within minutes.

“We never had nuclear weapons here but prototypes,” Wilkey said.

In late May, crews packed their gear and left Wendover. Support personnel took ground transportation to San Francisco to board a troop ship to Tinian Island, and the two designated B-29 crews from Enola Gay and Bockscar and support planes that would provide weather reconnaissance, blast measurement instrumentation, strike observation and photography and strike spare hopscotched across the Pacific to their destination.  Each B-29s received specific instruction for the two missions over Japan. Near the end of July, Merchant Marine ships hauled two atomic bombs to Tinian Island, one of three islands in the Northern Marianas that served as the launching point for the atomic bomb attacks against Japan, 3,000 miles away.

The two atomic bombs were Little Boy, designated for Enola Gay, and weighed 9,700 pounds. The uranium bomb had the force of 15,000 pounds of TNT, while the second plutonium, implosion-type bomb coded Fat Man, dropped from Bockscar.

Once the B-29s arrived on Tinian in late June, Wilkey said they  began flying practice missions over Japan. The result of the Trinity test at Alamogordo, N.M., successfully showed the Fat Man atomic bomb would work. The bomb units and U-235 projectile were loaded on the cruiser USS Indianapolis in San Francisco and arrived on July 26.

On Aug. 6, the mission’s crews received a briefing, and because of the mission’s secrecy and fear of the bomber being hit with enemy fire and the crew parachuting, Tibbets received cyanide capsules, one for each man on the Enola Gay. The bombers took off at 2:45 a.m. for Hiroshima, a six-and-a-half hour flight, and once over Iwo Jima, the Enola Gay ascended to a bombing altitude. Shortly after 9 a.m. the Enola Gay began its bombing run and 15 minutes later, Wilkey said the Tibbets’ plane dropped the Little Boy bomb on its target, a major bridge, and banked away. About 50 seconds later and 15 miles from ground zero, the blast rocked the Enola Gay. As Tibbet’s plane hurried from the area, another B-29 crew was photographing and filming  the bombing mission.

Tibbets described the experience with awe.

“A bright light filled the plane. The first shock-wave hit us. We were eleven and a half miles slant range from the atomic explosion but the whole airplane cracked and crinkled from the blast …. We turned back to look at Hiroshima. The city was hidden by that awful cloud … mushrooming, terrible and incredibly tall.”

“if Japan doesn’t surrender, then more bombs will be dropped on industrial centers,” Truman warned.

Truman’s message to the Japanese said he would use more atomic bombs to defeat the country that attacked the United States and who killed prisoners of war.

On Aug. 9, Bockscar and its accompanying B-29s took off from Tinian, but because of inclement weather over Japan, Sweeney scrubbed the first target of Kokura after three unsuccessful runs, but the plane found an opening in the clouds and dropped the plutonium-filled Fat Man on Nagasaki. Emperor Hirohito, who faced strong pushback from his generals not to surrender after the second atomic bomb, decided he would, saying he wanted to end the tragedy.

In case the Japanese didn’t surrender, the United States had a third atomic bomb ready for special shipment from New Mexico to the Marianas and designated to drop on Tokyo. Wilkey said it would’ve been a bloodbath to storm Japan if the emperor had allowed his generals to make the decision to protect their homeland.

“Some of the more conservative estimates predicted about 100,000 casualties … 500,000 to a million worst case,” Wilkey said. It was essential we could follow through (with the two atomic bombs) and end the war.”

The 509th conducted numerous missions in August besides the two bombing runs over Hiroshima and Nagasaki. For almost two months, the 509th dropped bombs on 140 sorties and conducted 70 operational flights. Although several B-29s returned to Wendover in August, the 509th returned as a composite group to the Roswell (New Mexico) Army Airfield — not Wendover — on Nov. 6.

The military had no further use for the Wendover Air Field, and the base slowly turned into a military ghost town. Buildings fell into despair, but a dedicated and concerted effort to breathe new life into the facility began in the 1980s. Wilkey said donations have helped fund the restoration of many of the World War II buildings, and the base has been an indispensable training facility for the U.S. Air Force and Air National Guard units for their F-35 fighter and drone training.