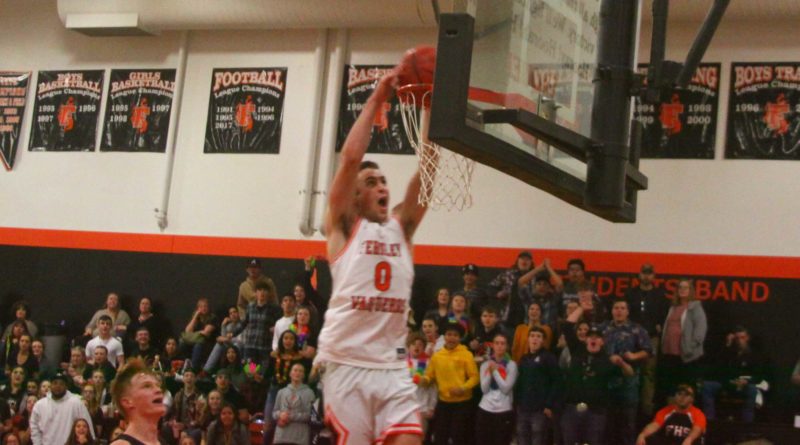 After the second of three hard-fought losses last week, Fernley boys basketball coach Derek Miller’s mind flashed back to the 2015 and 2016 seasons.

That’s when a young Vaqueros’ squad struggling to find its way learned what it takes to win in the Northern 3A, leading to a state tournament appearance in 2017.

The Vaqueros lost 47-46 in overtime at Dayton last Tuesday, then couldn’t recover from a third quarter run in a 58-55 loss to Spring Creek Friday, before losing 54-39 to Elko Saturday.

“I had to go through it with that group that went to State,” Miller said. “They had to go through turnovers late in the game to lose at the buzzer. It’s not fun, I don’t like losing but you got to learn from it.”

In Dayton, the Vaqueros got their offense going in the second half to turn around a 21-13 halftime deficit, but leading by three, saw Dayton’s Sunny Rojas hit a 3-pointer to tie the game and force overtime.

The Vaqueros made just 9 of 18 free throws in the game, and several of the misses came in the fourth quarter and overtime when they could have reversed the outcome.

“I thought we gift wrapped them the game,” Miller said. “Just did not execute down the stretch. Gave up a 3 late when we were up 3, we didn’t make free throws late, didn’t execute late what I told them in timeouts.”

Friday, a 3-pointer by Tucker Hall gave the Vaqueros a 33-32 lead over Spring Creek in a game that to that point six ties and nine lead changes. But Spring Creek responded with a 12-0 run to take a 44-33 lead. The Vaqueros battled back to twice get within two points, the last on a dunk by Drew Miller that made it 56-54 with 1:23 left in the game, after he had been called for a charging foul that nullified what would have been a possible three-point play had it been ruled a blocking foul.

“That was one I, obviously I’m going to think it was a block,” Derek Miller said. “He was in the air so long, who knows.”

The Vaqueros followed up with a defensive stop, and got within 56-55 on a free throw by Miller with 40.4 seconds left. Spring Creek’s Reed Westwood scored with 14 seconds left to make it 58-55, but after calling time out with 5.8 seconds left, the Vaqueros couldn’t get off a clean shot before the buzzer.

The Vaqueros had hung in the game early because of hot 3-point shooting, hitting eight triples in the first half to prompt the Spartans to abandon their zone defense.

But while that opened up the middle of the floor, the Vaqueros struggled to convert on shots closer to the basket.

“I thought we shot the ball well, but we ended up missing a lot of close ones that would have helped,” Miller said.

Carson Kingston, who had scored 21 in the loss to Dayton, hit five 3-pointers and led the Vaqueros with 23 points, while Tucker Hall added 19, also with five 3-pointers.

Friday the Vaqueros continued to show the progress they’re making in a 54-39 loss to undefeated and league leading Elko. The Indians were without three players who were out with injuries, and in the third quarter, the Vaqueros were within three before Elko closed strong to pull away.

“We played with a lot of energy and were in the game throughout,” Miller said. “Unfortunately we didn’t execute offensively when we needed to.”

Despite the three losses, the Vaqueros still stand alone in fifth place in the Northern 3A, albeit with a much smaller lead on the teams behind them fighting for the last two playoff spots. Truckee and Dayton are both 5-8, while Spring Creek is 4-9.

This week the Vaqueros will face a pair of defining matchups, hosting Sparks in their final home game on Senior Night Tuesday at 7:30 p.m., then Saturday going to Truckee for a game at 2:30 p.m.