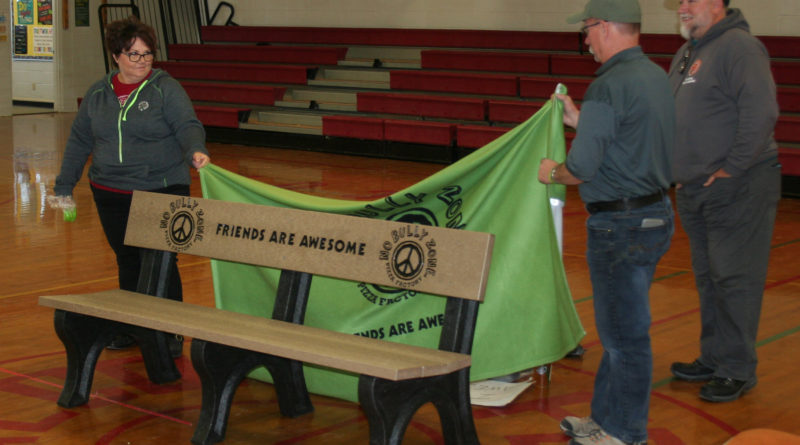 As part of an annual program, the Fernley franchise of Pizza Factory has declared Fernley Intermediate school to be a “No Bully Zone”, with the donation of a Buddy Bench to be placed on the school playground.

Pizza Factory CEO Mary Jane Riva and the owners of the Fernley Franchise, Suzy and Dave Del Porto and

Eric Lombardi, hosted an assembly for FIS students on Dec. 7 to unveil the bench and discuss their anti-bullying program.

Riva started the program in 2009 as the owner of a Pizza Factory franchise in Temecula, Calif., and then introduced the program company wide after becoming CEO in 2012. She said each of the 112 franchises selects a school each year to partner with to stop bullying.

In separate assemblies for fifth and sixth grade students, Riva, Lombardi and Suzy and Dave Del Porto unveiled the bench, engraved with the words “Friends Are Awesome”.

The acted out a skit to demonstrate how to meet new students, then Riva addressed the students.

Riva told the students that excluding people is another form of bullying, and encouraged them make a difference by being kind to everyone.

“We want to really focus on different kinds of kindness so nobody at this school feels they don’t have a friend,” Riva said. “There’s somebody in this crowd without a friend and you can make a difference by showing them some kindness.”

As the students filed into the gym, Riva, Lombardi and the Del Portos handed each student a bracelet signifying a commitment to being kind.

“The bracelet stands for making a commitment to this school, this town and these friends that can change a lot of lives just by being kind,” Riva said. “You guys right here can make a difference in Fernley, Nevada and can make this school have the strongest, kindest and most compassionate students.”