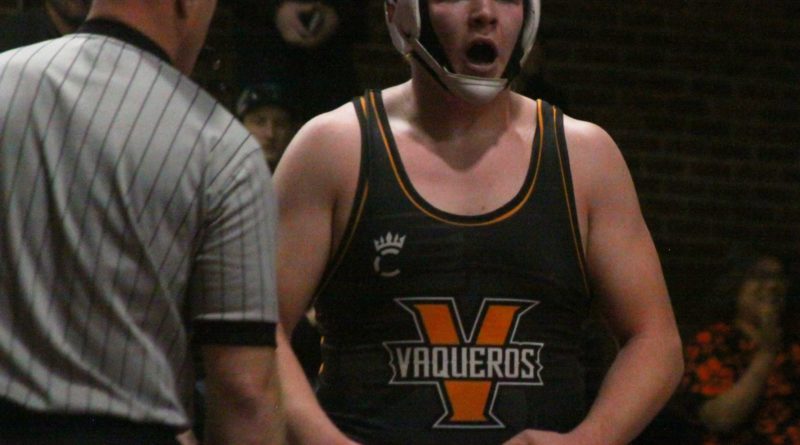 Setriano Piroddi was trailing by a point and the seconds were ticking away in the 220-pound championship match against Hunter Hood of Spring Creek at the Northern 3A Wrestling Championships at Sparks High School last Saturday afternoon. But as the clock went under 10 seconds, and his coaches were yelling at him to go, Piroddi had lost track of time and was still trying to set up his move.

Piroddi drove his shoulder into Hood’s midsection, wrapped him up like a running back, and took him down to his back, just before the final buzzer sounded.

The two-point takedown, and accompanying three-point near fall points, gave Piroddi a 7-3 win, and his third consecutive Northern Region championship.

“I know last time I looked we were at 30 seconds, so I knew there was short time, I had to go, but I didn’t know there was only like 5 seconds,” Piroddi said.

Piroddi’s championship was the only individual title for the Vaqueros, who qualified nine wrestlers for this weekend’s State Tournament in Mesquite. The Vaqueros finished third as a team with 143.5 points. Spring Creek was the regional champion with 313.5 points and Lowry was second with 167.

It’s a sign of the increased expectation the Vaqueros put on themselves that they went home disappointed on a day nine of them qualified for State.

“I think that shows how much we’ve grown since last year,” coach Ernie Garcia said. “Nine qualifiers is underperforming for us this year. Last year, we were happy to have five.”

Jackson Chapin (160 pounds) and Alec Carr (285) also reached the championship match of their weight classes, but had to settle for second place.

Chapin lost the title match to Beau Chacon of Spring Creek, while Carr took second to Shane Mattson of Lowry. Chapin was also awarded the Class 3A Outstanding Wrestling Sportsmanship Award by the Northern Nevada Wrestling Officials Association. South Tahoe was named the winner of the team sportsmanship award.

“We didn’t have the performance that we were expecting,” Garcia said. “Regionals tends to work out that way. Guys will have their best days and win matches that they don’t usually win. Unfortunately, we were on the losing end of those ones.”

Piroddi had lost to Hood at the Spring Creek Kiwanis Invitational, then beat him at the Northern 3A Divisional Duals. Hood had preferred to counterattack in the first two meetings, and he caught Piroddi off guard for a takedown when Piroddi wasn’t expecting him to shoot.

“He usually don’t, and that kind of got me, and it was actually like a not half bad shot, so I wasn’t really expecting it and I didn’t have too good of a defense with it,” Piroddi said.

If the two meet again this weekend, it will probably be in the state championship match. That’s where Piroddi’s season ended last year, in a way he wasn’t happy about.

“I was real disappointed with how I ended it last year, but no one is stopping me this year,” Piroddi said. “I’m just going.”

Jones was also a state runner-up last season and will be making his second appearance at the state tournament. Chapin is the only other Vaquero who has state tournament experience.

“It will be the first time that most of these guys will be at the state tournament as participants,” Garcia said. “They all have the potential to do incredible things next weekend. It’s the best time to perform at your highest level and I believe they will be prepared to do so.”