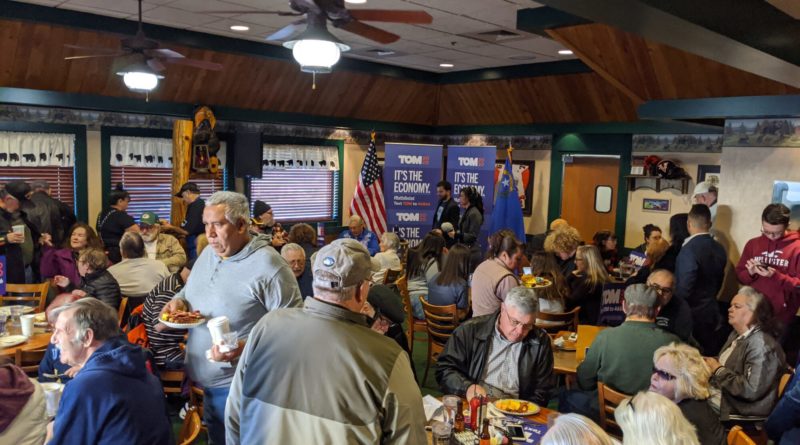 The smell of fresh pancakes, fried bacon and scrambled eggs filled the Black Bear Diner in Fernley on Wednesday as residents gathered to hear Tom Steyer make a case for why he deserved to stay in a dwindling field of presidential candidates.

Steyer failed to break into the top five in each of the first two states to weigh in on the race, but has pinned his hopes on Nevada, investing heavily in the Silver State and skipping out on Primary Day in New Hampshire to start a bus tour across Nevada. He’s taking heart in relatively high poll numbers here even as momentum in the race overall tilts toward Vermont Sen. Bernie Sanders and former South Bend Mayor Pete Buttigieg after Iowa and New Hampshire.

“I’m excited about Nevada. Honestly, I feel as if this is — now we’re coming to the part of the country where I poll really well, and I should do really well,” he told The Nevada Independent during a press gaggle after the meet-and-greet in Fernley, a city of about 20,000 people. “I feel like this is a brand new race. It’s wide open, and everybody’s going to get a chance to see if they can put together a diverse coalition of Americans.”

Carol and Dave Kulper, who live in Fernley and were among the estimated 125 people who came to the diner, said they planned to caucus for Steyer, whom they described as “genuine.” But they were disappointed in his showing in the first two states and are “up in the air” about who they would pick if Steyer does not make it past the initial 15 percent viability threshold on Caucus Day.

“I was really not pleased [about the results in Iowa and New Hampshire]. I would really like to see [Steyer] poll more, but I’m glad he’s not going to step back,” Carol Kulper said. “I’m glad he’s going to continue to keep fighting.”

She has recently noticed more people talking about Steyer, which gives her hope for his chances ahead of the caucus, too, she said.

Questions about Steyer’s staying power as three other candidates dropped out this week came up later on Wednesday when he held a climate change-focused conversation in a modern yet cozy space at The Elm Estate, a renovated historic property near the Truckee River in Reno. One of the audience members asked Steyer about how he planned to appeal to voters outside Nevada, a state close to his home in California.

RealClearPolitics’ average of polls shows Steyer polling at 10 percent in Nevada and 18.5 percent in South Carolina.

Attendees of the meet-and-greet asked Steyer about health care and his stance on guns, and shared stories about their experiences in a rural county where money is tight. One attendee who is a school bus driver said one of the students she takes to school has a broken hand and is currently wearing a homemade splint because her family cannot afford the hospital bills.

Steyer, a billionaire and former hedge fund manager, spoke empathetically to the assembled crowd, saying he believes health care is a right, and said he would allow cuts to Social Security “over my dead body.”

Attendee Dave Kulper said one of the reasons he is excited about Steyer is his message to middle and lower-income Americans.

“Well, he’s out to look for the people like us, on fixed incomes and, and helping us out. The rich are getting rich off of us, and we’re kind of living in poverty,” Dave Kulper said. “We worked hard all of our lives, and we deserve to have a little more than we have now.”

Others at the event were undecided about Steyer but looking for other options as their favorite candidates’ chances flagged. Beth Brown, a retired mental health professional, told The Nevada Independent that she is serving as a precinct captain for Massachusetts Sen. Elizabeth Warren but wanted to hear from another candidate.

“I was really glad I came because should Elizabeth not make it, I could lean second,” she said about Steyer. “We always have to think about our second.”

And then there was 17-year-old Tyler Alexander, one of a few young people among a group of mostly older people at Steyer’s climate change event. He’ll be voting for the first time this presidential cycle, and is unsure who to support after his first choices — New Jersey Sen. Cory Booker and Colorado Sen. Michael Bennet — dropped out of the race.

“[Steyer] seems like he really wants the government for the people. I enjoy that,” Alexander said.

He didn’t venture a guess on how Nevada’s caucuses will turn out, for Steyer or anyone else.

“The people vote for who they want,” he said.

Brown said she ultimately wants to elect a candidate who can win against Republican President Donald Trump.

“I think what I hear when I’m canvassing from voters is just, ‘whoever can beat Trump,’” she said. “I mean, that’s their most — it’s almost making them paralytic. They can’t even decide because they’re so concerned about who can beat Trump.”