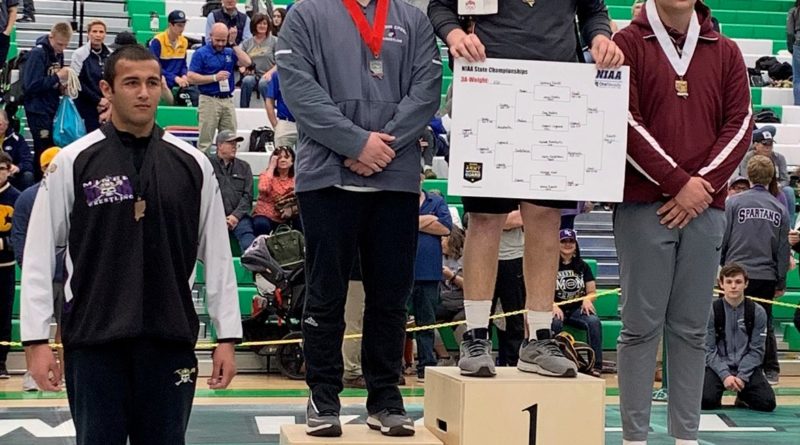 A second-place finish in the State Tournament last year lit a fire in Setriano Piroddi, that even winning his second consecutive Northern 3A regional championship couldn’t extinguish.

It took a trip to Mesquite, and a second consecutive close match against a familiar foe, for Piroddi to put out that fire, and keep a promise he made to his coach.

For the second Saturday in a row, Piroddi defeated Spring Creek’s Hunter Hood, this time by a 3-2 score in the 220-pound 3A state championship match, to win the state title that had eluded him in his previous two trips to State.

“He told me last year that he’d be my first state champ,” Fernley coach Ernie Garcia said. “Fast forward to this year and he kept his word. I’ll remember that moment forever.”

Piroddi was one of three Fernley wrestlers to reach the championship of their weight classes, bringing home three medals, after having just five qualifiers last season.

As a team, the Vaqueros finished fifth overall with 60 points, improving upon a 12th place finish last year.

Piroddi started the tournament by pinning Jesus Castro of Sunrise Mountain in 1:02, then pinned Darrin Legrand of Elko in 1:10 to reach the championship match against Hood.

There, he got a first period takedown with about a minute to go to take a 2-0 lead. Hood escaped shortly after to make the score 2-1 going into the second. An escape from Hood in the second period tied it up but Piroddi got an escape of his own in the 3rd to go up 3-2.

“The last 18 seconds felt so long,” Piroddi said. “It felt like forever.”

After being surprised by a takedown in the regional championship match against Hood, Garcia said Piroddi didn’t give Hood that chance this time.

“We definitely had more opportunities to score but he was wrestling smart,” Garcia said. “Hood has a really good head and arm so we were trying to stay away from that. That’s why he was able to control the match and win.”

After losing in the finals a year ago, Piroddi wrestled throughout the summer every Tuesday and Wednesday with Garcia, even while preparing for the upcoming football season.

“Last year, just getting second, it didn’t sit well with me,” Piroddi said. “My goal was to win state.”

Piroddi credited football with helping him get over the hump in wrestling.

“It gave me the mindset of that I don’t lose anymore,” he said.

At 160 pounds, Jackson Chapin took second to Spring Creek’s Beau Chacon, as he had at the regional championships.

Chapin beat Case Crandall of Virgin Valley 10-0 in his first match, then avenged a previous loss to Russell Bodily of Moapa Valley 10-6 to reach the championship match against Chacon.

“He lost to one of the best kids in the state to finish as a runner-up. It just shows how far he’s come,” Garcia said. “Last year he didn’t place and this year he was disappointed with a second-place finish.”

Garcia predicted that, like Piroddi, Chapin will be back next year, and win it all.

“He went after the toughest weight he could compete at and fell short against the best kid,” Garcia said. “He has everyone’s respect for that. Nobody put in more work than him.”

Nathan Glass provided one of the surprises of the tournaments, reaching the championship at 182 pounds.

He started off with a 12-8 win over Jaren Hafen of Virgin Valley, the South No. 1 seed, then pinned Ben Rohrbacher of South Tahoe in 3:51 in the semifinals.

“That guy had beaten him a handful of times this season, so we knew we weren’t supposed to win,” Garcia said. “It was one of those magic moments that happen at state every year.”

Garcia said Glass followed the game plan to perfection against both Hafen and Rohrbacher.

“One of the best moments of the tournament for me for sure,” Garcia said.

Kyle Jones (138) pounds and Alec Carr (285) both reached the consolation semifinals before being eliminated.

Jones beat Alexander Sullivan of Western 12-6, but lost 9-2 to Terron Morgensen of Spring Creek and 7-5 to Brandon Corsaro of SLAM Academy.

“He had a rough year filled with sickness and injuries that he battled through,” Garcia said. “His potential is through the roof, but we need to get him healthy.”

Carr started off by pinning Anthony Lewedag of Valley in 1:19, but in the semifinals, he was tied 3-3 with Kyle Hudson of Mojave, the South No. 1 seed, when he wound up on his back during a scramble and was pinned in 3:41

“That one was hard for us,” Garcia said. “The end result didn’t show how in control he was of that match. The other kid already had two stalling calls because of Alec’s offense and could barely stand up. If he doesn’t catch Alec on his back there, then Alec surely makes the finals.”

Carr was then eliminated by a 7-3 loss to Gabe Lozano of Elko.

“He was heartbroken, understandably, but to see how far that guy has come in just two years of wrestling is incredible,” Garcia said.

The other Fernley wrestler to win a match was Brandon Monteiro, at 145 pounds.

He was pinned in his opener by Gavin Thammavongsa of SLAM Academy, but came back to beat Jess Simpson of Mojave 9-6, before being eliminated with a 14-0 loss to Bear Browne of Spring Creek

“As a freshman at that weight class, the deck was stacked against him,” Garcia said. “We knew that second match was his shot at a win, and he delivered. He battled tough in his next match but lost to the fourth-place finisher.”

Piroddi and Carr are the only seniors on this year’s roster, and after finishing 12th last year with five qualifiers, the Vaqueros finished fifth with nine this season.

“Had a couple of matches gone differently, we would have ended up third, but I guess we’re in a pretty good spot when a fifth-place finish in the state is disappointing,” Garcia said. “We were 12th last year so the improvement has shown, but we are searching for something much bigger than a fifth-place finish. And we will get that.”

Piroddi has no doubt that the returning wrestlers are in for big things.

“Even in this last year, Ernie’s turned this whole program around,” he said. “We haven’t beaten Winnemucca in a dual in 20 years and then we go and beat them in divisional duals. Our team is going to be a force next year. They’re going to be good.”