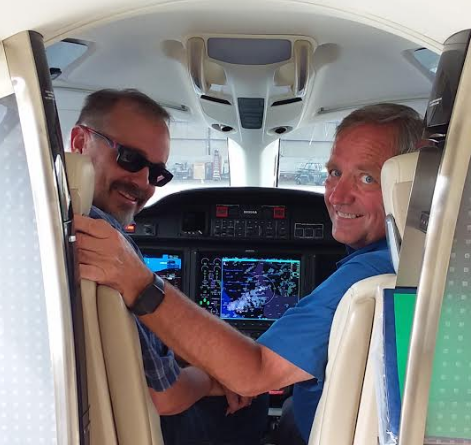 Aviation has come full circle for Troy Wadsworth as he prepares to teach his first Private Pilot Ground School class at Western Nevada College this fall.

Wadsworth was that student of aviation in the 1980s when he took flight training at Carson City Airport. Now, he will lead future pilots into the stratosphere and other rewarding aviation careers.

“My interest in aviation began in the early years of my life and I was privileged that my parents supported me and my flight training,” Wadsworth said. “I learned a lot about self-discipline, situational awareness and safety within the world of aviation.”

In Aviation 110, Wadsworth will provide students with the aeronautical information to pass the private pilot knowledge test. The online class covers aviation fundamentals, including principles of flight, aircraft and engine operations, weather, navigation and radio communications as required by Federal Aviation Administration regulations. Other topics that will be discussed are airplane service, maintenance and safety practices.

“The field of aviation has wonderful stories that formulate into a culture that most find very suitable to their desires — whenever or however they were first ignited,” Wadsworth said. “I expect my students to explore aviation with respect to its history as well as its changes, and to start to visualize themselves in a role — however that appears to them, in shaping aviation for tomorrow. They will be expected to participate, learn, explore aviation, as well as form a new perception of how aviation can evolve within their own experiences and expectations.”

The launching of the college’s first aviation class has created excitement among local airport administrators.

Moen, who has a background as an air traffic controller, pointed out that the aviation industry presents many more professional careers than piloting.

“The opportunities are immense and there are a variety of career paths from airport administration, air traffic control, mechanics, instruction, aviation law, engineering, quality control maintenance to airport improvements, and more.”

Although the demand for commercial pilots is low now because of COVID, Moen expects that trend to turn around.

“There are more pilots than the industry needs now, but pilots take early retirement and when airlines get back up, they are going to be in high demand,” Moen said.

Looking back on Wadsworth’s aviation career, he completed his flight training, then became a certified instructor in Cedar City, Utah. He also earned chief flight instructor status for a Part 141fixed-wing training school in Northern Nevada.

“There I was able to teach students not only the scientific aspects but how to appreciate their foundational knowledge and interest and helped them advance in their aviation from new students to professionals with careers in aviation,” Wadsworth said. “I have years of experience in single- and dual-engine fixed-winged aircraft to include flying for private companies as well as corporations such as The Leavitt Group.”

Seats are still open for students in Wadsworth’s online class. For details about becoming a student at WNC, go to www.wnc.edu/starthere. For more information about the class, contact Wadsworth at troy.wadsworth@wnc.edu.