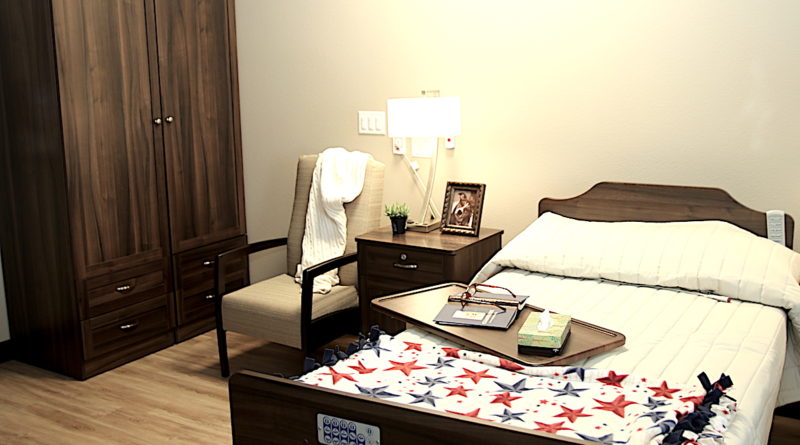 Nevada noted for its can-do attitude in securing funding and building 102,000 square-foot facility

SPARKS — An open house for the Northern Nevada State Veterans Home on Thursday has begun a new chapter in state-of-the-art health care for veterans, their loved ones and Gold Star families.

Gov. Steve Sisolak, who signed 20 veteran-related bills during the last legislative session, said the community worked together to make the new 102,000 square-foot facility a reality. The official ribbon cutting occurred in December 2018, but the facility didn’t accept residents until finishing touches were completed and furniture installed. The Nevada Department of Veterans Services said 28 veterans are currently receiving care at the $47-million facility. The veterans’ home will be able to serve 96 individuals.

Sisolak said the new facility eliminates the need for veterans to seek care in another state.

“Many had to be sent to neighboring states to receive the care that they desperately needed,” he said. “These vulnerable veterans were sent far away at a time they needed their families the most.”

The first-term governor said the facility — in addition to having three wings for different levels of care — also has a townhall, coffee bistro, sports bar and a recreated University of Nevada Wolf Pack football field in the hallway.

Sisolak acknowledged a number of elected officials and community leaders for their diligence in ensuring a veterans’ home was built in Northern Nevada. He specifically thanked former U.S. Sen. Dean Heller and Sparks Mayor Ron Smith for their efforts. Furthermore, he recognized both Gold and Blue Star families and pointed to the Gold Star Families Memorial that was dedicated in late June near the front of the facility.

NDVS Director Kat Miller said a previous quote from the governor has resonated with her about his commitment to serve and honor the state’s veterans.

“We are one Nevada — we hail from all walks of life, but we come together over and over again to make one another better, and we have each other’s backs,” said Miller, reciting his comment.

Miller also said retired U.S. Sen. Harry Reid first began work on securing the first grant for the facility in 2006, and Heller helped with the rule changes after he became a senator. Heller said after the ceremony the credit for the veterans’ home was a team effort from individuals at the local, state and federal levels. As a senator, Heller said he was able to present legislation to Congress for lawmakers to change several key rules. As a result, Nevada received a $33.5-million matching grant.

“We were able to build this for Nevada veterans,” Heller said.

During his years in both the House of Representatives and Senate, Heller said he served on different committees such as Ways and Means, Finance, Commerce and Banking, but he cherishes the time on the Veterans Committee.

“I could see the results of serving on that committee, and I enjoyed it,” he said. “I do hope that I participated in making life a little bit better for our veterans.”

Smith said he’s grateful to have the facility in Sparks.

“It’s a 5-star hotel in there,” he said, also recognizing both the Gold and Blue Star families.

Both Smith and his son, who recently retired from the U.S. Air Force, know the meaning of good health care.

“So I know first-hand the importance of having quality health care available to those wo have served our great country,” the mayor said, adding the new home will be a cherished part of the Sparks community. “It was built to serve and honor our Nevada heroes.”

Retired Maj. Gen. Peter S. Cooke, a member of Avalon Health Care, the group that is operating the new home for the NDVS, had last served as commanding general for the 96th Regional Readiness Command headquartered in Salt Lake City, Utah. His self-introduction from a 39-year Army veteran brought a loud roar from the audience: “My name is Peter Cook. I am an American soldier.”

Cook commended the state for finishing the veterans home and for their “can-do” attitude. He repeated a theme of “Come to Nevada” to see how officials obtained the funding to build the facility.

“I hear it can’t be done, can’t find enough money, not enough support,” he said. “For those who don’t believe, come to Nevada.”

Cook said Nevada is now the leader with the most updated health-care facility he has seen.