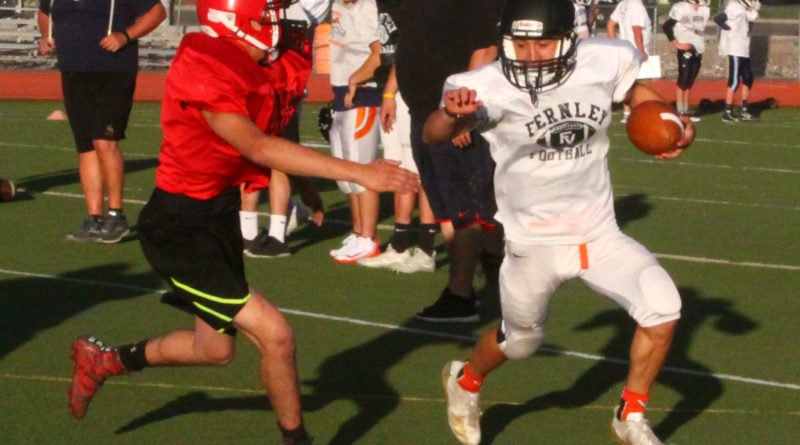 Camp brought seven coaches from his staff for the sixth team camp they have conducted this season.

Camp and his staff conducted a variety of fundamental drills for each position group throughout each day of the camp, along with several team building activities like tug-of-war. Teams were also given two one-hour sessions each day to work with their own coaches, with help from the Eastern Oregon coaches.

Fernley coach Chris Ward said the camp has been instrumental in the success the Vaqueros have had, including a breakthrough season last year in which they won their first league title in 21 years. Lovelock won the 2A state championship last season, and Camp said it’s gratifying to see the teams that participate in the EOU camp be successful.

It also serves as a recruiting tool for his program, and he said there were at least a couple of players at the camp that he planned to offer scholarships.

“It’s helped us and it spreads the word,” Camp said. “I think Nevada’s football is very good and I think you’ve got some tough-nosed kids.”

As the host school, Fernley had the biggest group of players, with as many as 57, although attendance fluctuated each day as players dealt with other commitments.

Ward said this year’s camp has added importance for the Vaqueros, because they won’t have a scrimmage this season, and their nonleague game is the second week of the season, after opening the season at Truckee.

That means the Vaqueros, who lost almost their entire offensive lineup to graduation, have to use the offseason to see who is going to fill the spots left by those graduated seniors.

“So this gives us a chance to look at kids that are going to play hard, even if they’re not in shape, but who has that desire to play and even though they may not do the right things,” Ward said. “The thing we’re looking for is intensity. We’ll clean up mistakes.”

Aside from their work on the field with players, Camp and his staff also spent time with the coaches, talking schemes, drills and just spending time together.

“I think football is awesome, right, but at the same time, to build relationships that are meaningful, with the high school coaches, to be able to sit at lunch with them, to be able to get on the greaseboard with them, and be able to run ideas off of them too, because they’re not rookies,” Camp said. “The thing is, they commit the time to bring young men to our camp, so I want them to feel also important, that I appreciate what they’re doing for young men in today’s day and age.”

Ward said that is particularly valuable for the Vaqueros’ coaches, because, although he doesn’t run that scheme at Eastern Oregon, he is well versed in the flexbone offense the Vaqueros run.

Lowry brought 33 players, mostly young guys, coach Taua Cabatbat said. He said the competition and concentration on fundamentals is ideal for his group.

“We’ve got a deeper group of seniors coming up and I think they continue to improve, and with camps like this and offseason workouts I think we’ll be a little better team than we were last year,” Cabatbat said. “When you’re at the bottom of the barrel, there’s only one way to go to the top.”

Cabatbat said he also tries to soak up as much knowledge as he can through the week and learn things his team can use throughout the season,

“It’s like a library out here with all these coaches, it’s just like, pick a book,” he said.

Brooks played and coached under McLean, and said their families remain close.

Lovelock had 34 players, including its entire JV team, at the camp. The Mustangs used to attend the team camp on the EOU campus, but Brooks said it was too far to be able to take a lot of young players, who need the most work on fundamentals.

“I think the EOU coaches do a great job, they’re really nice guys, we like having them here and the competition is perfect for us, and the closeness,” Brooks said. “We drive back and forth every day, and it doesn’t even take an hour to get here.”

Coral Academy is in its second year, and will compete as a provisional member of the Northern 2A, while awaiting to join the league as a full member.

Coach Adam Barrett, a former Sparks assistant, said he and Ward are good friends, and Ward invited his team to attend the camp when they were at a coaching clinic together last year.

The Falcons will also be running the flexbone offense, so Barrett said he relished the opportunity to talk with Camp and Ward about the offense, while the camp gave his players a great atmosphere and competition, that will allow the players who attended to mentor their teammates on what they learned.

“These Eastern Oregon coaches are great, they’re really good at working on the techniques and picking up on things to help these kids improve at every position,” White Pine assistant coach Tom Lawrence said. Lawrence was acting head coach for the Bobcats during the camp, because head coach Nick Lopez was unable to attend.

“The line work has been great, we only brought a few linemen, but they’re gaining some very valuable experience,” Lawrence said. “I like what we’re seeing here and what we’re getting from it.”