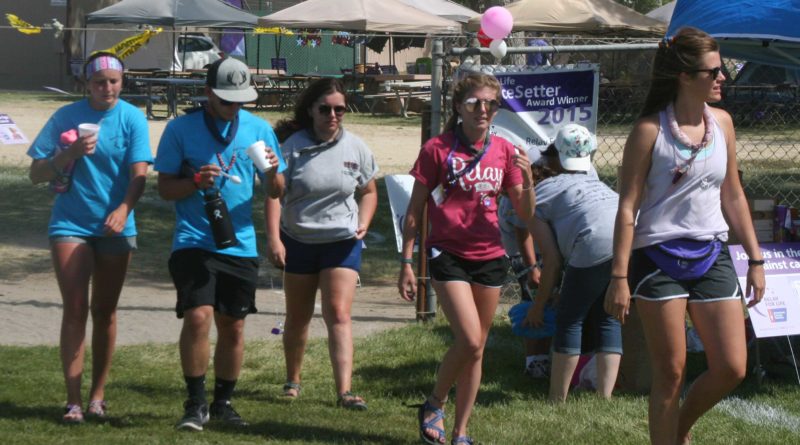 In her time of need, it was Relay for Life, and the people involved, that gave January L’Angelle the support she needed in her recovery from two bouts with cancer.

This year’s event allowed her to try to do that for others.

L’Angelle has been involved with Relay for Life for three years. Last year she was diagnosed with breast cancer and had a double mastectomy, after having overcome skin cancer.

This year, having made a full recovery, she was one of the leads in the event’s decorating committee. This year’s theme Lights, Camera, Cure, fit right in with her background working in the entertainment industry in Hollywood as an editing and casting director.

“I have to say the American Cancer Society really helped me in so many ways with a lot of moral support and through its community,” L’Angelle said. “I feel like Relay gave me a soft place to land after a difficult time in my life.”

L’Angelle, who has lived in Fernley for the past eight years, was completely bald at last year’s Relay for Live after undergoing chemotherapy.

Having gone through two bouts of cancer, she said she was looking for answers, among them the universal “Why me?”

“The loving support I got from the people in Relay really helped me,” L’Angelle said. “I had so many people come to my rescue, emotionally, spiritually and physically, so I feel my dedication to Relay is so important at this time in my life.”

L’Angelle was one of the top fundraisers for this year’s Relay for Life, which was held last Saturday and Sunday at the Out of Town Park.

I do feel that’s my way of giving back,” L’Angelle said. “I have close family relatives who have been recently diagnosed with cancer. I’m able to be there for them the way the people in Relay were for me, so it’s like the pay it forward moment.”

Fernley Relay for Life event lead Marla Nichols said 29 teams participated in this year’s relay. While that number was a little below the past couple of years, she said total participation in Saturday was about on par with last year.

The event featured teams raising funds through donations and through a variety of fundraisers, including booths at the relay event where they sold a variety of crafts, baked goods and other items.

It also included the traditional survivor’s dinner and the luminaria ceremony, in memory and in honor of those who had lost their battles with cancer. They also held a painted chair auction, and the American Cancer Society had a large inflatable purple chair.

After four years of serving as event lead, this year’s relay was Nichols’ last as event lead. She said she plans to remain involved with the Relay for Life committee, but is handing the leadership reins to Ryan Robinson, who will take over in September when the committee begins its planning for next year’s event.