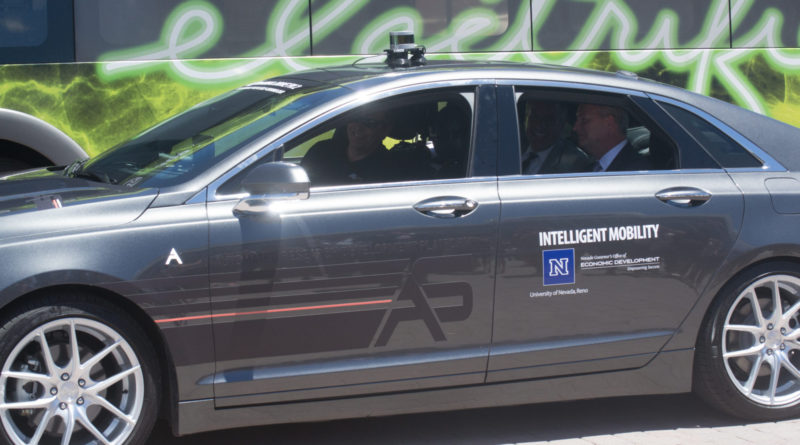 Governments often find themselves on two ends of the electric vehicle equation.

On one side, governments such as China and California, with considerable market power, are imposing or considering mandates that have accelerated carmakers’ efforts to bring more electric vehicles to market. At the same time, policymakers everywhere are watching vehicle penetration increase and wondering how to prepare infrastructure for a more electric fleet.

In early October, seven Western governors, including Gov. Brian Sandoval, signed onto a memo aimed at opening up region’s desolate interstate highways to electric cars. The memo builds upon the state’s strategic efforts to construct electric charging stations and Sandoval’s initiative, as the National Governors Association chair, to support advances in transportation.

Drivers of electric cars have traditionally been confined to urban areas, where there are more charging stations. Some owners are wary to travel too far outside of their bubbles, where they might not see another charging station for hundreds of miles. The bipartisan memorandum of understanding attempts to eliminate this “range anxiety” across 5,000 miles of Western highway. Its other goals are to create policies for building charging stations. They include:

–       Include infrastructure in planning and development.

–       Encourage carmakers to sell and market electric vehicles in the states.

In the document signed Oct. 4, the states, which will come back with a progress report in April, argued that the “improved availability of regional electric vehicle infrastructure will increase access to our highways, promote tourism and recreation in our rural communities.”

As of July 2016, Nevada officials reported 2,104 registered electric vehicles in the state. It’s a small number, but one that has steadily risen since July 2014, when there were only 694 electric cars registered here. A recent report from utility trade group Edison Electric Institute predicted that electric vehicle sales could skyrocket by 2025, making up about 7 million cars on the road.

Nevada’s efforts to accommodate electric vehicles began in 2015 when Sandoval announced plans to build an electric highway connecting Las Vegas and Reno. In 2016, the administration opened charging stations in Beatty and Fallon. That means a trip from Reno to Las Vegas is feasible for long-range electric cars. With the next phase, expected to be completed this year, charging stations will open in Tonopah and Hawthorne, opening up Highway 95 for most cars.

Matthew Tuma, a deputy director in the governor’s Office of Energy, said the ultimate goal is to build out a network of charging stations across the state by 2020. Some of the corridors that the state is targeting include Interstate 15, Interstate 80, Highway 93 and Highway 50.

“We look at it as a real access issue,” Tuma said.

The memo, which focuses on building a charging network on Interstates 15 and 80, takes the state’s goal one step further by making it possible for electric vehicle owners to drive to Salt Lake City or Denver. Automakers such as Tesla are also building out their charging networks on some of these highways, but these stations are often proprietary. Tuma noted that all of the state-sponsored charging stations will be open to any electric vehicle, regardless of brand.

Nevada and other states plan to fund their efforts, in part, from a multi-state lawsuit against Volkswagen for violating environmental and consumer laws by subverting emissions standards. The suit resulted in a $14 billion settlement last year. Under the agreement, Volkswagen said it would invest about $2 billion in electric vehicle infrastructure. Nevada will coordinate with those efforts to avoid building duplicative infrastructure. In addition, the state will receive $5.3 million from the settlement, a portion of which will go toward electrifying its highway system.

Environmentalists see electric vehicles as a way to improve greenhouse gas emissions. Much of the environmental movement’s time is focused on the power sector, but transportation accounts a large percentage of the emissions that drive climate change. In 2013, transportation was responsible for 33 percent of Nevada’s total greenhouse gas emissions, compared to the power sector’s share of 34 percent, according to a recent report from the Nevada Division of Environmental Protection.

“Equipping 5,000 miles of freeways throughout the west with electric vehicle charging stations will help drive away the pollution from dirty transportation that harms our climate and our communities,” a Sierra Club spokesperson said in a statement. “Encouraging the rapid transition to electric vehicles is an all-around win for our climate, our public health, and our economy.”