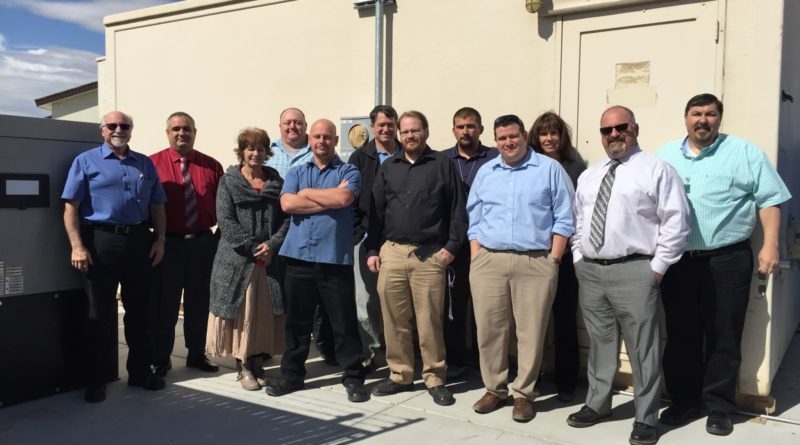 Lyon County School District (LCSD) is constantly looking into upgrading/updating its network infrastructure (network), in an attempt to meet and exceed the ever increasing needs of its students and staff. The Information Technology Department (I.T. Department) over the last couple of years have made significant strides with the district’s network.

To understand the significance of the I.T. Department’s efforts to upgrade LCSD’s network, a bit of history is necessary. Fourteen years ago, LCSD was operating on a 1Mbps link to the internet. This single link was for the five communities – Dayton, Fernley, Silver Springs, Smith Valley and Yerington – that make up LCSD. The school district now has a 10Gbps fiber link, which is the equivalent 1,000,000,000 Mbps. This upgrade is possible because of the newly acquired fiber in the LCSD’s communities, with the final project being in Smith Valley.

What is fiber? Fiber is a short name for Fiber-Optic cable, which is a thin flexible strand of glass that transmits light signals, primarily for telecommunications (Internet, phone, etc.). Fiber allows LCSD to access more bandwidth and transmit data more efficiently than cable or radio frequencies permit.

The task of bringing fiber technology into LCSD, a project estimated to cost millions of dollars, will be done for little or no cost to the district. Thanks to the diligent efforts of the I.T. Department, LCSD has consistently poised itself to take advantage of fiber acquisition in every community as it becomes available.

Fiber acquisition presents a unique challenge because this technology requires a physical cable to be extended into each community hoping to enjoy its high speed connection. LCSD, composed of a group of rural communities as far away from each other as 70 miles at any given point, will be very fortunate to have all of its communities connected to the latest available technology in high speed internet. This past year, the I.T. Department has secured the largest increase to the district’s internet bandwidth, using newly available fiber in Fernley, Dayton, Silver Springs and Yerington, and in addition, the district has been made aware that Smith Valley, the most rural community in LCSD, will join the rest and should have access to new fiber and its high speed benefits by the end of this year.

While there have been a number of setbacks and delays, the I.T. Department has performed a number of upgrades, often unnoticed and performed while many of us were enjoying our evenings and weekends.

The district’s network has gone through many stages to get to this point. Multiple grants were used to accomplish this, such as Erate, State of Nevada thru the Department of Education by the Commission on Educational Technology and from the Governor’s Office of Science, Innovation and Technology.

The I.T. Department wrote for and received a 90% funding grant for fiber in Dayton, Silver Springs and Yerington, adding Fiber Huts to Dayton and Silver Springs matching the Fiber Hut that was installed in Fernley many years ago. Using Erate funding at 80%, equipment was purchased to allow each site to take advantage of the increased internet bandwidth. This equipment has mostly been installed during nights and weekends, with all the backend programing associated being done after hours to avoid affecting working LCSD staff during normal business hours.

The I.T. Department still has many projects currently going on. A few are Audio Enhancement, area fiber huts and a seven site Voice Over IP (VOIP) phone system implementation. The Audio Enhancement projects, being one of the largest, includes new network wiring, switches and servers to be added. It has been discussed that the district, in cooperation with the State and Federal Government agencies, may be able to obtain funding to connect the last of the schools in Fernley and Dayton with Fiber this upcoming year. This project, like the rest, may be done for little or no cost to the district.

It is the hope and the plan for LCSD and the I.T. Department to have each school in Lyon County connected to fiber and each site internally wired with fiber-optic cable within the next few years.