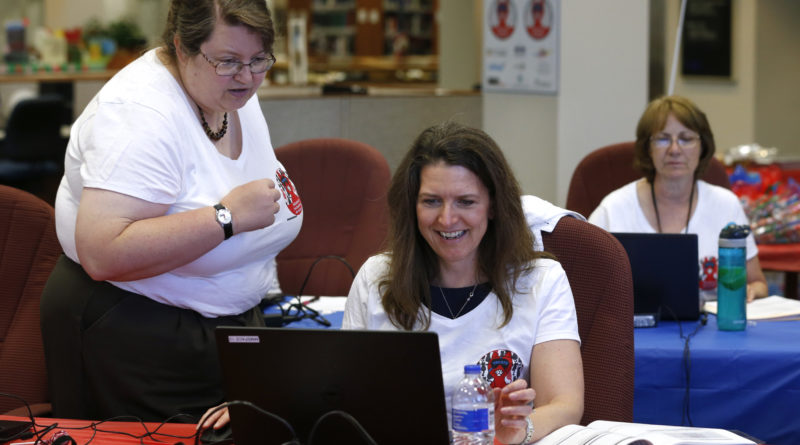 Librarians from two states — joined by volunteers across the country — spent the day June 13 cataloging virtual reality en masse as part of the XRCatalog Hack-a-thon.

“As a state library, part of our job is to drive continuing education,” said Deputy State Librarian Tammy Westergard. “We’ve convened a group of motivated workers to catalog our virtual reality content, which gives access to libraries around the world.”

Libraries across the state have adopted virtual reality programs over the past two years, using one-time funding allocated by the 2017 Nevada Legislature.

“That funding has kick-started a powerful opportunity for Nevada libraries,” Westergard said.

The $500,000 was used over the last biennium for collection development, bookmobile services, statewide databases and emerging technology.

The Nevada Library Association asked this year’s Legislature for $1.5 million in permanent funding to continue the programs put in place over the past two years.

Lawmakers approved $450,000 in permanent funding during this year’s session, which concluded earlier this month.

While it was less than what the association asked for, libraries will be served.

“It’s so important for all the libraries throughout Nevada to have a permanent funding source,” said Cyndi O, director of the Nevada Library Cooperative, which represents many of the libraries participating in XR educational initiatives locally and who participated in the Hack-a-thon. “This reinforces and validates the value of the information services that libraries deliver on a daily basis.”

“Hackers” cataloged virtual reality content created by Lifeliqe, the nation’s leader in 3D STEM education, which has been implemented in Nevada libraries and classrooms.

Once cataloged, the content will be discoverable to libraries worldwide and accessible to those who wish to subscribe.

“This is huge for us,” said Mark Andersen, co-founder and president of Lifeliqe. “This is the most efficient way for libraries around the world to learn about the content we have.”

The Nevada State Library, Archives and Public Records partnered with the Marin County Free Library, with stations at both locations dedicating the entire day to cataloging. Volunteers across the country also joined in virtually.

“We’re really trying to close the digital divide and get marketable, high-value skills for folks,” said Jones, director of the Marin County Free Library and president of Califa, California’s consortium of libraries. “We think the library is the natural place to do that because it’s free and open to everyone.”

Westergard said the Hack-a-thon is changing the landscape of library services.

“Library materials have continued to change over the last hundred years,” she said. “If this new information format is not put into the WorldCat catalog, it does not exist for librarians. To say that we are making library history is an understatement.”

Editor’s note: This is the final story in a series of articles to highlight library programs funded by the Nevada Legislature. The Nevada Library Association sought permanent funding in this year’s legislative session.