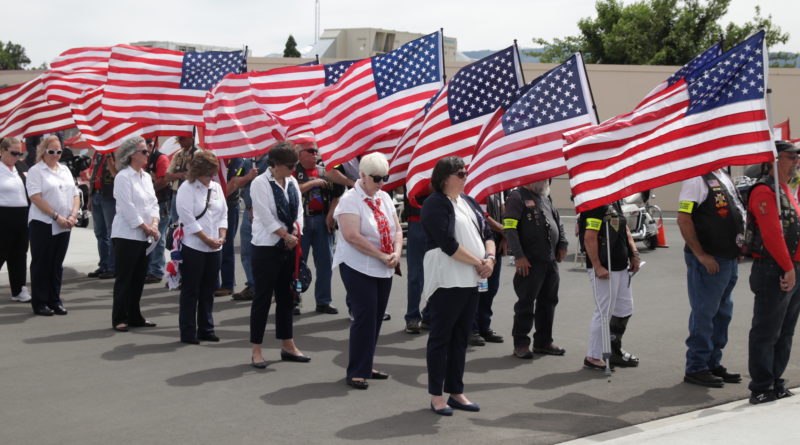 Every community affected by the loss of a serviceman or woman

SPARKS, Nev. — Nevada became the latest state on Saturday to honor the sacrifices of those killed in military service by dedicating a Gold Star Families Memorial on the grounds of the recently opened Northern Nevada State Veterans Home in Sparks.

In an afternoon marked by speeches from two Medal of Honor recipients, Hershel “Woody Williams and Donald “Doc’ Ballard, and a Gold Star father, the dedication served as a reminder of the sacrifices families also endure when a loved one is killed. The black granite memorial at the veterans’ home has two sides, one facing south that represents a tribute to Gold Star Families and the other side that looks north tells a story on four panels of Homeland, Family, Patriot and Sacrifice. A cutout in the panel’s center symbolizes the loved one who paid the ultimate sacrifice.

Once a cover was pulled from the memorial, families placed yellow roses either at the base or on the top ledge.

“In our state of West Virginia where it started, we got the very first one (Gold Star Families Memorial) started in 2013,” said the 96-year-old Williams, a Marine who earned his Medal of Honor due to his heroism at the Battle of Iwo Jima on Feb. 21, 1945. “In this short period of time, the communities — I didn’t do it — realized there were Gold Star families living in their communities and nobody had said anything about them or had given them any honor, any praise any tribute, nothing. We didn’t even recognize them. We’ve done a good job of recognizing veterans. We have done a very poor job in honoring the families.”

Williams said the memorial will be important for the Gold Star community, knowing their loved one will never be forgotten.

Ballard, who was a Navy hospital corpsman during the Vietnam War, was treating two Marines who suffered from heat exhaustion when an enemy grenade landed near him, the wounded Marine and four others. According to numerous accounts, Ballard threw himself on the grenade to shield the five Marines from the blast, but the grenade didn’t explode. Once Ballard realized what had occurred, he hurriedly threw the grenade away from the Marines where it then exploded, saving all of them from severe injury or death.

“It is a great memorial,” Ballard said. “It is a healing source for the families. Most of the families really don’t have the ability to communicate (with others) as well because obviously they’ve had some challenges.”

Jon Yuspa, a board member with the Gold Star Families Memorial in Nevada, said the memorial means so much to the families.

“They paid the ultimate price. Their loved ones have passed, but they live with this every day,” he said. “So this to honor them.”

Yuspa said raising funds and the construction has grown into a mission, but families have told him its importance.

After the ceremony, Kenny Curtzwiler of South Lake Tahoe, Calif., had a son die by suicide after he left the U.S Navy more than a decade ago, and his daughter, Sgt 1st Class Miranda McElhiney, died in the Carson City IHOP Restaurant shooting on Sept. 6, 2011, along with two other Nevada Army National Guard soldiers and a civilian woman when a gunman opened fire.

“He (Ballard) touched on something else,” said Curtzwiler who retired as a major from the Nevada Army National Guard in 2008. “Dads cry too, and the other thing is 22 (number of veteran suicides in a day) is too many. I lost a son also to Post Traumatic Stress. For him to touch on a subject like this during this ceremony was powerful.”

“Many people don’t know what a Gold Star family is,” she said.

The unveiling of a Gold Star Families Memorial has been a labor of love not only for Yuspa but also for the northern Nevada community.

“This respectful for the families,” he said of the memorial. “This is about the families.”

Yuspa said Williams recognizes the sacrifices and the community support.

“We took him to the Reno Rodeo, and he was crying,” Yuspa said. “He didn’t realize there is so much patriotism in Nevada.”