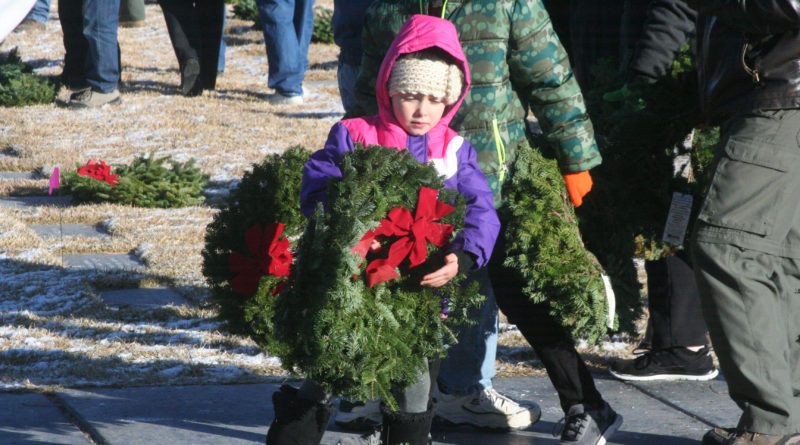 Every Thursday, Korean War veteran Mike Gobec makes the trek from Reno to place flowers on his wife’s grave at the Northern Nevada Veterans Memorial Cemetery.

Saturday, for the first time, he posed a wreath on her headstone as part of the Wreaths Across America event.

Gobec served in the U.S. Marine Corps in Korea from 1951-53, after enlisting straight out of high school.

After his tour of duty he became a police officer and served as a police chief in the Sacramento area, before he and Linda retired to Reno. Saturday’s ceremony took place just three days after the two-year anniversary of her death.

The couple lost a daughter at age three and a half, and Gobec said he is glad that his wife and daughter are now reunited.

“She would love it because she loved flowers and stuff like that,” Gobec said. “But, if she knew we were standing here, she was say, ‘You know I’m not in there.’ She’s up in heaven with Sissy.”

Gobec was one of nearly 2,000 people who came out despite a temperature in the teens to place wreaths.

Nevada Veterans Coalition spokesman Tom Draughon said this is the third consecutive year the Coaltion was able to raise enough in donations to place a wreath on the more than 7,500 graves of every veteran in the cemetery.

Draughon served as master of ceremonies for the event, quoting Ronald Reagan, that freedom is never more than one generation away from extinction.

“The wreaths before you represent our commitment as a united America to remember the fallen, and we also want these remembrance wreaths to symbolize our honor to those who have served and are serving in the armed forces of our great nation and to their families who endure sacrifices every day on our behalf,” Draughon said. “To our children, we want you to understand the freedoms we enjoy today have not been free, but have come with a cost, that someday you may have to pay yourself.”

Roger Linscott and several other members of the Northern Nevada chapter of the Sons of the American Revolution participated in placing wreaths, while dressed in replica Revolutionary War uniforms.

One of the graves he placed a wreath on was that of his uncle, Albert Springmeyer, who served in World War II, and is interred with his wife Barbara.

“We’ve been doing it for about five years,” Linscott said. “A nice remembrance.”

The Nevada Veterans Coalition began participating in Wreaths Across America in 2007, with 28 wreaths, and the event has grown steadily throughout the years.

The wreaths are purchased through donations for the project, with money coming from private individuals, businesses, service clubs and other groups.

Natalie and Beau Fretter brought their children out from Reno to be part of the event.

“They have a lot of familiy in the military, on both sides, and they understand the importance and what it means, what we’re out here doing, and why there’s wreaths on all the headstones.”

“I’ve done it every year, I can’t remember, that’s how long,” Amber said. “It makes me feel all warm and fuzzy inside.”