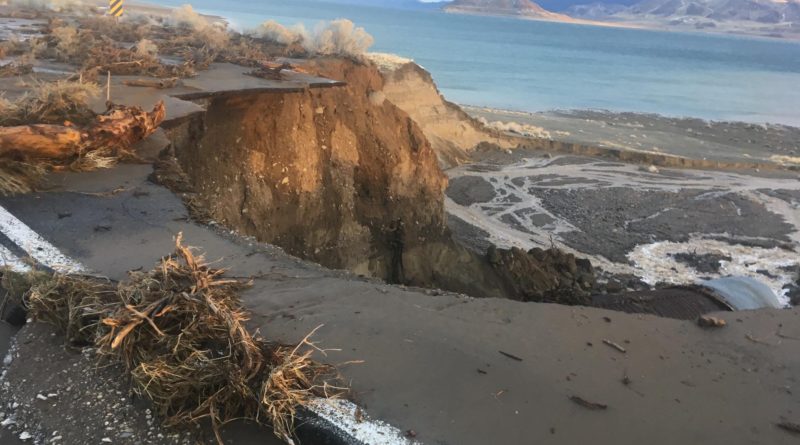 Finishing repair work to roadside shoulders will continue, but the entire length of State Route 446 will be open to all drivers. A section at the northern end of the highway remains limited to a single lane, with traffic flaggers alternating directions of traffic.

Situated at the southern end of Pyramid Lake, State Route 446 sustained the greatest damage of any state road during early January floods. More than 10 sections of roadway were completely washed away, with floodwaters carving nearly 50-foot ravines through the roadway.

In the days following the flood, reconstruction work began with local road contractor Granite Construction building a gravel bypass road to allow construction and other access. Approximately 100,000 cubic yards of rock and earth was then used to fill flood-related erosion. Roadway drainage pipes were also replaced and large rock placed in drainage channels to help diffuse future floodwaters. The road was then repaved. The repairs cost approximately $4 million. The state has already received initial federal reimbursement funds for some flood repairs.

“From the very morning after the flood, our NDOT construction administration staff and local road contractors were hard at work to repair flood-damaged state roads, from Interstate 80 to Kingsbury Grade, State Route 342 and others,” NDOT Assistant District Engineer for Construction Rick Bosch explained. “Many areas of State Route 446 were simply washed away, and being able to safely reopen the highway so quickly is truly a testament to the hard work of NDOT and Granite Construction staff.”

Effective March 4, the Pyramid Lake Paiute Tribewill open the beaches from Popcorn to Tamarack, and North Nets to Shot Dog.  The area north of Tamaracks to South Nets, Warrior Point and all points north, and Dago Bay and Howard’s Beach on the south end of the lake remain closed to the public until further notice.

Motorists can dial 511 or visit www.nvroads.com before driving for updated road conditions.