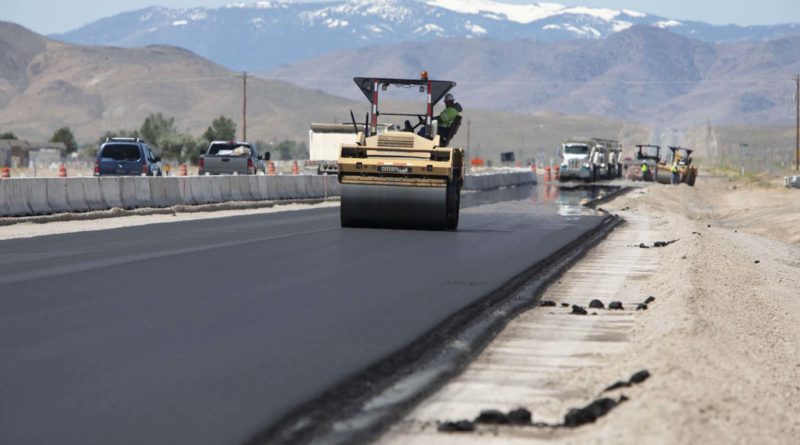 Minor detours and lane shifts will begin this week on U.S. 50 in Stagecoach as part of a Nevada Department of Transportation project to widen the highway. As part of the project begun in January, crews have thus far excavated and paved approximately six miles of new westbound lanes. Beginning Tuesday, June 11 through approximately June 21, the following traffic switches will take place as part of highway paving in the Stagecoach area:

· Westbound U.S. 50 traffic will be shifted from the existing lane to the new westbound lanes between Cheyenne Trail and Roy’s Road.

Highway speed limits are reduced to 55 mph through the work zone, with an advised 45 mph speed in the Stagecoach area. Speed limits are 25 mph on the frontage roads, and motorists are advised to leave extra travel time for the reduced speeds.

Motorists will continue to see reduced speeds, intermittent single lane closures and traffic shifts on U.S. 50 in the coming months.

The concrete roundabout will make intersection travel safer and quicker, with free right turns between U.S. 50 and southern Alternate U.S. 95. Eight frontage roads are also being constructed, tying local access roads into major intersections for safer designated turns to and from the highway.

Roadside lighting will be installed and enhanced for improved visibility and safety at major intersections. Roadway drainage improvements are also being made. Fourteen miles of new four strand, four-foot high livestock fencing will be constructed on both sides of the highway to reduce vehicle-animal collisions and enhance safety. The Alternate U.S. 50 truck climbing lane just north of the U.S. 50 junction has also been lengthened.

The nearly 10 miles of highway to be widened is traveled by approximately 6,000 drivers daily. The approximately $50 million highway project by contractor Granite Construction Company marks the final phase of widening of U.S. 50 to four lanes between Carson City and Silver Springs.

Over the past decade, NDOT has widened U.S. 50 from eastern Dayton to the Stagecoach area from two to four lanes.