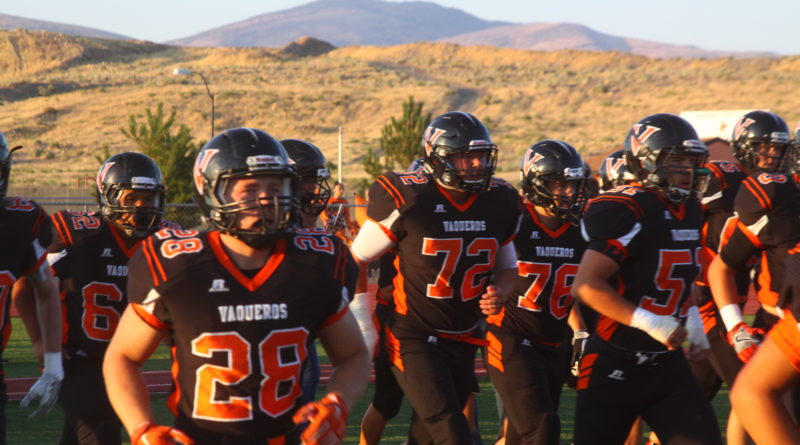 After losses to Fallon the past couple years, Fernley coach Chris Ward was disappointed because the Vaqueros were unable to compete with the Greenwave.

Ward’s disappointment Friday night came because the Vaqueros showed they could.

Fernley rushed for nearly 300 yards and stood up well physically at the line of scrimmage, but came away with a 26-13 loss because of a bevy of turnovers and penalties.

“I think we just shot ourselves in the foot one too many times,” Ward said. “Penalties, too many turnovers, but it’s all kind of stuff that we can fix. But we’re going to be good, we’ll be fine, just disappointed.”

Cade Vercelotti carried the ball 30 times for 182 yards and two touchdowns and quarterback Christian Nemeth threw two touchdown passes in his first varsity start to lead the Greenwave to the victory.

Zach Burns rushed 22 times for 141 yards and two touchdowns in his varsity quarterback debut for the Vaqueros, including an 80-yard touchdown run on an option keeper. Willy Pritchard carried the ball 17 times for 101 yards for Fernley.

“I think this is the best we’ve run the ball against them in the last three or four years, so yeah, I was pleased by that,” Ward said. “We were able to get the fullback established, and also able to get our quarterback and get some yards too.”

Burns scored on an 80-yard run on the first play after the Vaqueros forced Vercelotti to fumble at the Fernley 20-yard line, cutting Fallon’s lead to 12-7.

Burns completed 5 of 17 passes for 73 yards and was intercepted four times, but ran the Vaqueros’ option attack effectively. Ward said Burns was close to breaking a few other runs for long gains.

“He was a step away here and there a couple times,” Ward said.

The Vaqueros missed chances early in the game when they were unable to convert on fourth down on two consecutive drives into Fallon territory, and once more on their first drive of the second half.

Several mistakes allowed the game to get away.

The Vaqueros were called for roughing the punter on the first play of the second quarter, and instead of Fernley having the ball down 6-0, Fallon scored three plays later.

“You don’t win too many games when you turn the ball over five times,” Ward said. “We clean that stuff up and it might be a different game.”

Ward said when the Vaqueros watch the film on Saturday, they will see the chances they had to make it a different game.