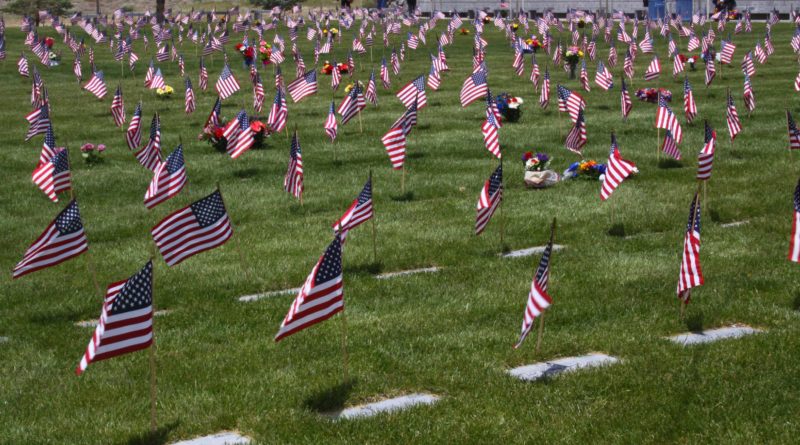 Ordinarily, a dime left on a headstone is a message to a deceased person’s family that someone who served with that person visited the grave.

It meant something much different for the family of Norma Rutherfurd Monday afternoon.

While nearly 2,000 people turned out for Monday’s Memorial Day Ceremony at the Northern Nevada Veterans Memorial Cemetery in Fernley to remember those who have served our country, U.S. Navy veteran John Rutherfurd and his family were their to remember a woman who spent her lifetime serving them.

Rutherfurd and eight members of his family gathered in a semicircle around the grave of his wife and their mother, Norma. They left a pair of Mason jars with flowers in water, and as they walked away, another placed a dime on the headstone.

“She collected them,” said Dena Rutherfurd, the youngest daughter of John and Norma Rutherfurd. “We found in her drawers all those little apple juice bottles that look like an apple, full of dimes.”

John Rutherfurd served as a radarman on the first guided missile cruiser, the USS Canberra, followed by the USS Topeka, in 1958-59, as part of the goodwill People-to-People Program established by President Dwight D. Eisenhower. The program was created to enhance international understanding and friendship through educational, cultural and humanitarian activities involving the exchange of ideas and experiences directly among peoples of different countries and diverse cultures.

“We went through the Mediterranean to France and England and places where nobody went, I mean the Navy didn’t go, because they were resort type ports,” John Rutherfurd said. “It was a fun time, a good time.”

Norma was born in Carson City and raised in Coleville, Calif. John Rutherfurd was born in Southern California, but after his stint in the Navy, went to work for the sheriff’s office in Independence, Calif., where he met Norma.

“Her mother was a cook in the jail and invited me over, and one thing led to another,” John Rutherfurd said.

“She raised us until the grave and she was just a beautiful, strong, silent woman, a gardener, she loved to travel, a great mathematician and an engineer,” Dena Rutherfurd said.

Norma died Nov. 4, 2018 and was buried in the Northern Nevada Veterans Memorial Cemetery, where John will be buried with her.

“She was the wife of my father who was in the Navy, but she served us her whole life,” Dena Rutherfurd said.

Like the Rutherfurd family remembering their matriarch, most of Monday’s ceremony was focused on celebrating women.

The theme of this year’s ceremony was “Honoring Women in the Military.”

Starting with the Revolutionary War, women have played a vital role in every conflict and war in United States history. Monday, the Nevada Veterans Coalition, Governor Steve Sisolak and a crowd of close to 2,000 paid tribute to the role women have played in the U.S. military during the annual Memorial Day Ceremony at the Northern Nevada Veterans Memorial Cemetery in Fernley.

The ceremony honored the more than 8,700 veterans interred in the cemetery, as well as those around the state of Nevada, the country, and their families.

“We are ever grateful to all veterans and their families for their many sacrifices while serving our nation and the state of Nevada,” Sisolak said. “On this Memorial Day, let us acknowledge and honor the countless achievements of all our veterans.”

Sisolak, who served as one of the keynote speakers for this year’s ceremony, along with Captain Kandace Gonzales, a U.S. Army Black Hawk combat medevac pilot, recounted some of the achievements of Nevada women serving in the military.

“All of these successes can be attributed to the hard work and path laid by the brave, selfless women who have served in the U.S. military over the years, starting with Deborah Sampson,” Sisolak said.

Sampson, a Massachusetts woman, disguised herself as a man and enlisted in the Continental Army in the Revolutionary War in 1782 and served 17 months under the name Robert Shirtliff.

“Still, whether recognized by the U.S. military or not, American women have been serving and sacrificing throughout U.S. history,” Sisolak said. “Since the Revolutionary War, hundreds of American military women have been killed in action during combat.”

The Women’s Armed Services Integration Act, enacted on June 12, 1948, permitted women to serve as full members of the U.S. armed forces, and in 1976 the first group of women joined the U.S. Army Corps of Cadets at West Point and became the first class of females admitted into a U.S. military academy.

There are currently 512 women veterans among the more than 8,700 who have been interred at the Northern Nevada Veterans Memorial Cemetery. The first Patsy Del Vecchio, was interred Sept. 27, 1990.

Sisolak also recounted the story of Doris Howard, who was born in 1920, the year women were granted the right to vote. On April 24, 1945 she was aboard the USS Comfort, the forward-most hospital ship boarding the wounded from the Battle of Okinawa, when it was attacked by a kamikaze pilot. Howard survived the attack and currently lives in Reno.

Col. Kat Miller, Director of the Nevada Department of Veterans Services, served as the event’s master of ceremony.

“Not every veteran laid to rest at this beautiful place died in combat, but they all served their country and they were all prepared to give their lives if called upon,” Miller said. “And so today, we not only remember the sacrifice of many, but the service of all who are resting here and at cemeteries across this nation and those who are still missing.”

Sisolak noted the more than 8,700 flags placed on the cemetery’s graves and along the columbarium.

“It’s so moving and beautiful and touching,” he said. “It’s something to really behold.”

Gonzales spoke in memory of those who died while defending freedom.