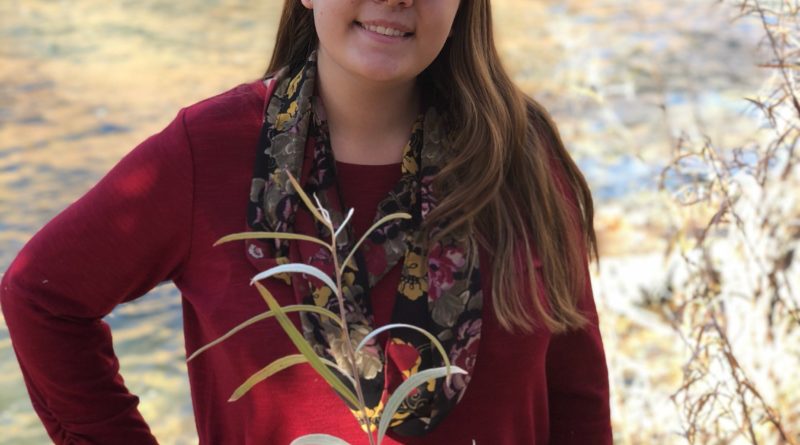 Two students who have ranked atop their class their entire high school careers have earned the top honors in the Fernley High School Class of 2019.

Kennedy Lyon-Lindersmith has earned the title of valedictorian, while her friend Sabrina McCallum is the salutatorian. They credited each other for their support, and look forward to sharing the stage to address their classmates.

The FHS class of 2019 will celebrate its commencement Friday at 7 p.m. on the FHS football field.

“I thought we would be competitors and we ended up helping each other,” Lyon-Lindersmith said.

The daughter of Rachel Lyon, Kennedy Lyon-Lindersmith is graduating with an unweighted grade point average of 4.0 and a weighted GPA of 5.375.

She has earned an $18,000 scholarship from Embry-Riddle Aeronautical University in Daytona Beach, Fla., where she plans to major in mechanical or aerospace engineering with a focus on astronautics, in the ultimate pursuit of becoming an astronaut.

She also earned a merit-based $5,000 Women of Excellence Scholarship and has received the Voice of Democracy Scholarship the last two years.

Lyon-Lindersmith has also been a part of the Western Nevada College Jump Start program for the last two years and graduated May 20 with her Associate of Science degree.

She also received the Principals’ Award, was on the WNC Dean’s List and has perfect attendance for all four years of high school and has been a member of the National Honor Society for three years.

She said the support to achieve all of that came from her family, mainly her mother, sister and grandparents, Kim and Dave Lyon.

“For me it’s been a passion,” she said. “I’ve always loved coming to school and learning. The school part is easy. It’s not work for me.

Lyon-Lindersmith said she achieved all of her feats in spite of, or maybe because of, procrastination.

“My motto is ‘Due tomorrow equals due tomorrow,’” she said.

Lyon-Lindersmith said science and math were her favorite subjects in school, and she listed Ms. Jody Ericksen, who taught her chemistry class, and Mr. Brian O’Neill, from whom she took Algebra 1 and AP calculus, as her favorite teachers.

She has had the goal to be valedictorian since first learning what one was and looking it up in the dictionary when she was 10 years old, and she got interested in space and astronautics while at the world competition with First Robotics her eighth grade year, and

“I read all the time, and the newer technologies and changing the world looks cooler than mixing chemicals, and the body creeps me out, so the medical field didn’t interest me,” Lyon-Lindersmith said.

She said she would advise students entering high school to not take a lot of online classes, because they don’t have the teacher interaction and can’t help students in the same ways.

She said the theme of her valedictory address will be ‘This is merely where our lives begin.’

She also was a member of the WNC Jump Start program, and but rather than graduate in May, she will graduate this summer with her AA of Science degree in order to complete her nursing assistant certification on her diploma.

“That’s the biggest achievement in my life, hand in hand with being salutatorian,” McCallum said.

She ranked second in her class academically throughout her high school career.

McCallum said, unlike Lyon-Lindersmith, she is more interested in English than science or math, but after finishing her CAN certification, she plans to attend the University of Nevada, Reno in the fall, then go to medical school with the ultimate goal of being an orthopedic surgeon.

McCallum has been a member of the National Honor Society for the past three years, serving as Vice President for two years. She has been taking AP and honors classes throughout high school until joining Jump Start. She is also a longtime member of 4-H, competed in rodeo, participated in cheer, was named to the WNC Dean’s List, and had perfect attendance last semester.

McCallum was also a member of the Fernley High marching band for four years as a percussionist, and she mentioned going to Washington, D.C. to perform in the national Independence Day Parade as one of the highlights of her high school years.

She has earned the UNR Merit Scholarship and will receive the Millennium Scholarship, and is awaiting word on several other scholarships.

McCallum said her advice for younger students would be don’t sweat the small stuff, because grades are grades, and don’t take the typical high school drama too seriously.

“Take time to sleep, and make sure you’re healthy and happy,” she said.

That is particularly important to McCallum, who has dealt with melanoma.

McCallum said her most important mentors have been Rachel Lyon and Windi Altemeyer.

“Windi is my nursing assistant teacher and she helped me set stones where to go, and Rachel has been like a second mother who kind of kept me on right path and made sure I’m doing what I need to,” McCallum said.

She also joked that she has achieved all she has done out of spite.

She also wanted to give special thanks to Fernley High principal Kent Jones for his dedication to Jump Start.

“And for being someone who actually cares how kids end up,” McCallum said.

The theme of McCallum’s speech will be adaption.

“We are not the same kids we were in middle school and elementary school, and we’ll wind up just fine,” she said.