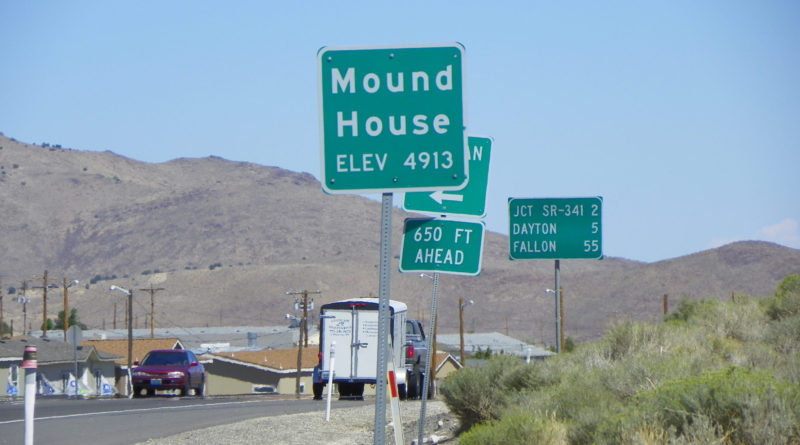 After the sex workers cleared the commission chambers Thursday morning, after the TV crews sped off to file their segments and after the anti-brothel advocates walked away pleased with the results, Jeff Page, the county manager, sat back in his office chair and explained the situation.

Since 1971, the year Lyon County passed an ordinance to legalize brothels, the question of their existence had never come up at a county meeting. Page said, according to his review of county records, the only one who had ever commented on the issue was a pastor named Gene Chism.

“Pastor Gene in 1971 told the board, ‘Don’t do this. Don’t legalize it,’” he said. “Since that time, there’s been nothing agendized by the Board of County Commissioners to address the issues.”

That changed Thursday morning after the county’s five commissioners voted unanimously to draft a ballot question for November to ask voters whether its brothels should stay or go. For Lyon County, the decision brings a privately debated issue into the public for a direct vote.

“It’s healthy [to have this debate],” Page said. “We get a number of issues out on the table.”

The commission felt compelled to take up the issue after anti-brothel advocates filed a separate referendum petition that would have outlawed legalized prostitution within the county’s limits.

The referendum would have asked voters to uphold or strike Lyon County’s brothel ordinance. If voters struck down the ordinance, Lyon County’s four brothels would be outlawed. But if voters upheld the ordinance, it could strip away the county’s ability to regulate brothels. Because of the way referendums work, an affirmative vote would freeze the county’s ordinance, at which point all of future brothel rules on health and safety could only be changed by a vote of the people.

So the county decided to present a simpler ballot question to replace the referendum. Page said he’ll begin drafting an advisory question on Friday that puts the issue in yes or no terms:  Should the county strike its brothel ordinance? The commission will vote again in early June to officially place it on the ballot, but after Thursday’s meeting, Page said it’s likely to appear on the ballot.

After the meeting, referendum organizers applauded the commission vote, saying that they welcomed the county’s decision to clarify the language in their original ballot question.

“In 1971, when the commissioners created legalized prostitution, the people didn’t get to vote,” said Denise Berumen, a Dayton resident and one of the referendum petitioners. “Now we get to vote… After that, it will be our duty to make sure that the people understand why it’s important to get rid of the brothels. That’s our next step, getting the community informed.”

Nevada is the last state in the union to allow legalized prostitution and Berumen argues that it is time for a change. For years, she has worked to ban brothels with Awaken Reno, a nonprofit group that combats sex trafficking. Berumen said her decision to fight against brothels was a personal one; her daughter was approached by a brothel owner when she was 17 years old.

“It’s something that’s been on my heart for a long time,” she said.

Her group is also working on a ballot question in Nye County. Together, Lyon County and Nye County have eight brothels, all of which are owned by Dennis Hof, a brash and outspoken candidate running to unseat Assemblyman James Oscarson in the Republican primary.

In past interviews, Hof has told The Nevada Independent that a ban on brothels would have adverse economic consequences for rural communities. It would mean money spent on vice unites to combat illegal pimps. It would mean a smaller tax base and fewer jobs, he argued.

Others like Berumen have argued the opposite is true. She told The Nevada Independent in April that the presence of brothels is a deterrent to economic development, especially as the region looks to attract tech giants and their employees look for places to move their families.

“You want to make it a positive environment,” she said.

Hof did not attend Thursday’s meeting, but his brothels had a presence.

One of his employees who identified herself by her stage name, Lexi James, said she moved from California and works as a legal courtesan at Hof’s Love Ranch North in Carson City.

“We wanted to come out and make a presence because the other side is here,” James said. “They are trying to say they’re saving our lives but they are really just trying to save our souls. And I’m good. I have a very close relationship with God. I don’t need anyone religious stepping in and telling me what I do for a living is wrong… What I do is not sex. I sell love. I provide services to disabled clients, widowers, divorcees, helping couples spice things up.”

Cara Rain, another brothel worker who moved from North Dakota, said she supported the idea of putting the question to the voters but said that voters should learn more about her work.

“I think they need to educate themselves on all of this completely,” she said. “I chose this profession without ever being in the sex industry prior and I’m completely happy here.”

Melissa Holland, co-founder and director of Awaken Reno, pushed back on that narrative. She said many workers are trapped in the profession and don’t want to be there.

“That’s the vast minority,” she said. “I want to look at the overwhelming majority of what’s happening as a result of this. It is an incredibly dehumanizing and objectifying and exploitive business.”

Brothels dot several counties across the state, but organizers are focusing on Lyon and Nye counties, where they believe there is already support for outlawing the businesses. If voters in those two counties approve a ban, Jason Guinasso, the attorney who wrote the original referendum, said that he hopes the Legislature will take up the issue when it meets next year.

“The issue for us was whether they had the grassroots support that we saw in Lyon and Nye,” Guinasso said. “If these two counties repeal their brothel ordinances, it will be easier in other counties.”

Hof’s brothels are concentrated around Mound House between Dayton and Carson City. His other brothels are in Nye County. Supporters of Hof’s brothels believe the organizers might have political motive since the campaign is targeted on counties where Hof owns brothels.

“They are going after the brothels in Lyon County and Nye County because Dennis is running for office in Nye County,” said Nancy Calvert, who worked for nearly 10 years at Hof’s Moonlite Bunny Ranch. “Why don’t you start in Storey County where there is only one brothel?”

Calvert and Gueldner drove down to the meeting together and both live near Mound House.

During the interview, Gueldner was holding a pocket-sized copy of the New Testament over an article about the brothel ban in the Dayton Valley Dispatch. A minister gave it to her during the Thursday meeting and Gueldner, who said she was also a minister, didn’t mind taking it.

“I’m a minister through Universal Life Church monastery and I’m not judging any human being,” she said. “I’m for the people. I’m for keeping jobs. I can’t stand there and judge them.”